Memory loss is often the first sign of Alzheimer’s disease, followed by confusion and difficulty thinking. These symptoms reflect the typical pattern of worsening damage to brain tissues. Toxic clusters of proteins first concentrate in the temporal lobes of the brain — the memory area — before spreading to parts of the brain important for thinking and planning. 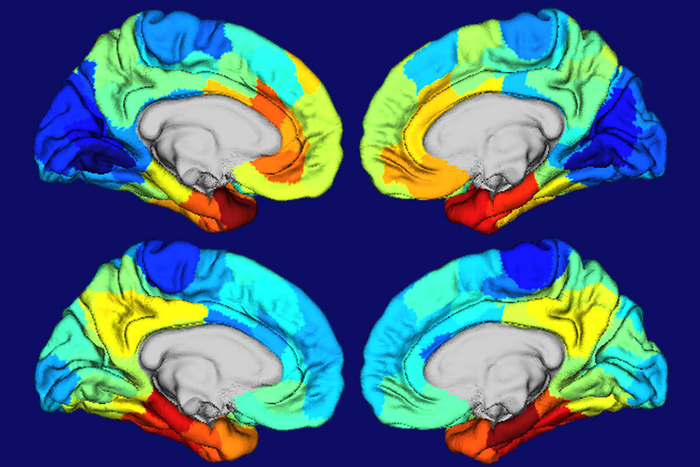 Memory loss is often the first sign of Alzheimer’s disease, followed by confusion and difficulty thinking. These symptoms reflect the typical pattern of worsening damage to brain tissues. Toxic clusters of proteins first concentrate in the temporal lobes of the brain — the memory area — before spreading to parts of the brain important for thinking and planning.

A study by researchers at Washington University School of Medicine in St. Louis yields clues to why certain parts of the brain are particularly vulnerable to Alzheimer’s damage. It comes down to the gene APOE, the greatest genetic risk factor for Alzheimer’s disease. The parts of the brain where APOE is most active are the areas that sustain the most damage, they found.

“There are some rare, atypical forms of Alzheimer’s in which people first develop language or vision problems rather than memory problems,” said senior author Brian A. Gordon, PhD, an assistant professor of radiology at the School of Medicine’s Mallinckrodt Institute of Radiology. “When you scan their brains, you see damage to the language or the visual areas, and not so much to the memory areas. People with atypical Alzheimer’s are often screened out of research studies because it’s easier to study a group where everyone has the same set of symptoms. But this heterogeneity tells us that there are things we still don’t understand about how and why Alzheimer’s develops the way it does. There’s a reason why certain brain areas become damaged and not others, and we don’t know that reason yet. Every mystery we uncover with this disease pushes us closer to what we need to address it.”

Alzheimer’s disease begins with a brain protein known as amyloid beta. The protein starts building up into plaques two decades or more before people show the first signs of neurological problems. After years of amyloid accumulation, tangles of tau — another brain protein — begin to form. Soon after, tissues in the affected areas begin to wither and die, and cognitive decline sets in.

To understand why Alzheimer’s brain damage occurs where it does, Gordon and colleagues — including first author Aylin Dincer, a technician in Gordon’s lab — studied 350 people who volunteer for memory and aging studies through the School of Medicine’s Charles F. and Joanne Knight Alzheimer Disease Research Center. The participants underwent brain scans so the researchers could measure the amount and location of amyloid plaques and tau tangles, and the volumes of various brain areas.

The researchers compared the patterns of protein clumps and tissue damage in the volunteers to the gene expression patterns of APOE and other genes associated with Alzheimer’s disease as depicted in the Allen Human Brain Atlas, a detailed map of gene expression in the human brain compiled by the Allen Institute for Brain Sciences.

“There was a close match between where you see high APOEexpression, and where you see tau tangles and tissue damage,” said Gordon, also an assistant professor of psychological & brain sciences. “And not just APOE. If you look at, say, the top 20 genes associated with Alzheimer’s disease, they are all expressed in the temporal lobes in similar patterns. There’s something fundamentally different about these regions that make them vulnerable to Alzheimer’s brain damage, and that difference is probably baked in from birth and influenced by a person’s genetics.”

Everyone carries some version of the APOE gene, but people who carry the APOE4 variant are up to 12 times more likely to develop Alzheimer’s disease than the general population, and at a younger age. Alzheimer’s researchers have long known that APOE4 increases the accumulation of amyloid beta in people’s brains. Studying mice that develop tau tangles but not amyloid plaques, David Holtzman, MD, the Barbara Burton and Reuben M. Morriss III Distinguished Professor of Neurology, and colleagues showed that APOE4 also increases damage due to tau, even without amyloid present.

“APOE4 carriers are more likely to start accumulating amyloid, which puts them on the path to Alzheimer’s,” Gordon said. “Then, for the same amount of amyloid they get more tau tangles, which leads to more atrophy. It’s a double hit on the brain.”

In future work, Gordon and colleagues plan to explore how patterns of gene expression relate to patterns of tau damage in people with atypical Alzheimer’s.

“When we see someone who presents with vision problems, is there a specific genetic signature that corresponds to the areas that are damaged in the brain?” Gordon asked. “We want to know why some people have these altered patterns and what it means about how Alzheimer’s disease develops and how it can be treated.”

The following authors have no competing interests regarding this study: A.D., C.D.C., N.S.M., A.M., L.N.K., S.F., S.J.K., R.L.F., R.C.H., A.M.F., J.C.M., and S.E.S. S.A.S. receives research support from the National Science Foundation. B.A.G. receives research support from the NIH and the Alzheimer’s Association N.J.-M. is supported partly by the Alzheimer’s Association International Research Program. C.C. received grants from the NIH and reports fees from GSK and Takeda. D.M.H. is a cofounder of C2N Diagnostics LLC and serves on the scientific advisory boards or consults for Genentech, Denali, C2N Diagnostics, Cajal Neurosciences, Takeda, Casma, and Eli Lilly. D.M.H. is an inventor on (i) a patent entitled “Antibodies to tau,” U.S. patent number 9,834,596, licensed by the Washington University to C2N Diagnostics on the therapeutic use of anti-tau antibodies; and (ii) a patent licensed by the Washington University to Eli Lilly entitled “Humanized antibodies that sequester amyloid beta peptide,” U.S. patent number 7,892,545, on a humanized anti-Aβ antibody. The laboratory of D.M.H. receives research grants from the NIH, Cure Alzheimer’s Fund, Tau Consortium, the JPB Foundation, Good Ventures, C2N Diagnostics, NextCure, and Denali. T.L.S.B. has investigator-initiated research funding from the NIH, the Alzheimer’s Association, the Barnes-Jewish Hospital Foundation, and Avid Radiopharmaceuticals (a wholly owned subsidiary of Eli Lilly). T.L.S.B. participates as a site investigator in clinical trials sponsored by Avid Radiopharmaceuticals, Eli Lilly, Biogen, Eisai, Jaansen, and Roche; serves as an unpaid consultant to Eisai and Siemens; and is on the Speaker ’s Bureau for Biogen.