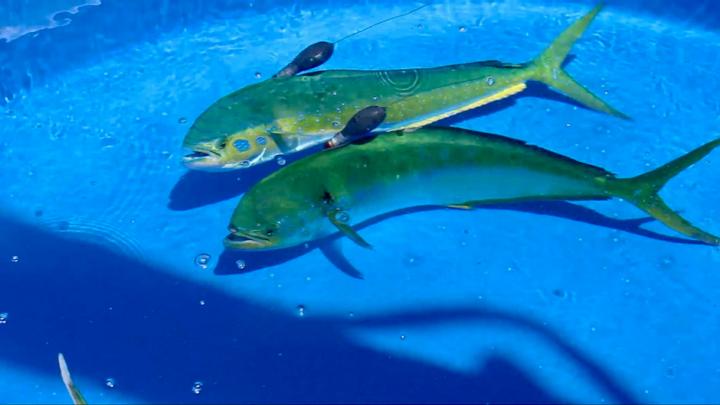 MIAMI–In the Florida Straits at night, and under a new moon is the preference for spawning mahi-mahi, according to a new study by scientists at the University of Miami (UM) Rosenstiel School of Marine and Atmospheric Science.

These new details on the daily life of the highly sought-after migratory fish can help better manage their populations and provide scientists with new information to understand the impacts to the animal from changing environmental conditions.

To uncover these important details about the behaviors of mahi-mahi, or dolphinfish, the research team tagged captive spawning fish located at the UM Experimental Hatchery to build predictive spawning models and then used the models with data collected from mahi-mahi tagged in the wild. The study is the first to use acceleration data from remotely transmitting pop-up satellite tags to predict the spawning habitat of a wild marine fish. The UM Experimental Hatchery is the only place in the country where spawning mahi-mahi are kept in captivity.

To build the predictive models, the research team tagged five spawning mahi-mahi (Coryphaena hippurus) at the UM Hatchery and waited overnight to record the timing of when they spawned. In total, 40 individual spawning events were tracked in captivity. Then, they paired the acceleration data collected from the tags with the exact time of spawning to estimate when the animals would spawn in the wild.

To test the models’ capability to estimate where and when the fish spawned in the wild, the researchers tagged 17 wild mahi-mahi off the coast of Miami and two in the Gulf of Mexico.

From an analysis of the satellite tag data, the researchers found that wild mahi-mahi spawn at night, primarily during a new moon at depths greater than they would normally be. The Florida Straits appeared to be an important spawning habitat for mahi-mahi, although the models suggest that some limited spawning takes place further north.

They found that mahi-mahi typically go deeper in the water column at night and are more surface oriented during the day. However, the phase of the moon had an effect on their nighttime depth distribution with a full moon bringing mahi-mahi closer to the surface at night.

They also found that mahi-mahi use behavioral thermoregulation to stay between a relatively narrow temperature window of about 27-28 degrees Celsius (80 – 82 degrees Fahrenheit). When surface waters are warmer, they move deeper and swim northward with the Gulf Stream to regulate their temperature, while fish tagged in cooler months stayed primarily in surface waters and migrated east and west between Florida and the Bahamas, rather than swimming north. They were also found to be the most active at cooler temperatures and in warm waters during a full moon at night.

“Mahi-mahi are highly sought after by recreational and commercial fisheries and are economically important,” said Lela Schlenker, an alumna of the UM Rosenstiel school and lead author of the study. “It is critical to understand their migrations and the frequency, timing, and location of where they reproduce as well as how changing environmental conditions–like warmer oceans–might affect them to manage their populations sustainably now and in the future.”

The team also found from the satellite tag data that the wild mahi-mahi travel long distances–up to 107 kilometers (105 miles) per day and dive to depths of 250 meters (820 feet).

“Together these findings suggest that as climate change continues to warm ocean waters, mahi-mahi will likely continue to shift northward and deeper throughout their migrations,” said Martin Grosell,” professor and chair of the Department of Marine Biology and Ecology at the UM Rosenstiel School. “This is important for recreational and commercial landings of mahi-mahi and the ecology of pelagic ecosystems. A fruitful collaboration between scientists from three departments at the Rosenstiel School, as well as colleagues from University of Massachusetts, Dartmouth and access to healthy spawning mahi-mahi in captivity revealed new information about these valuable fish,” said Grosell.