Study shows superbugs in the environment rarely transfer over to humans: Hospitals are more risky than farms

An international team of scientists investigating transmission of a deadly drug resistant bacteria that rivals MRSA, has found that whilst the bugs are found in livestock, pets and the wider environment, they are rarely transmitted to humans through this route. 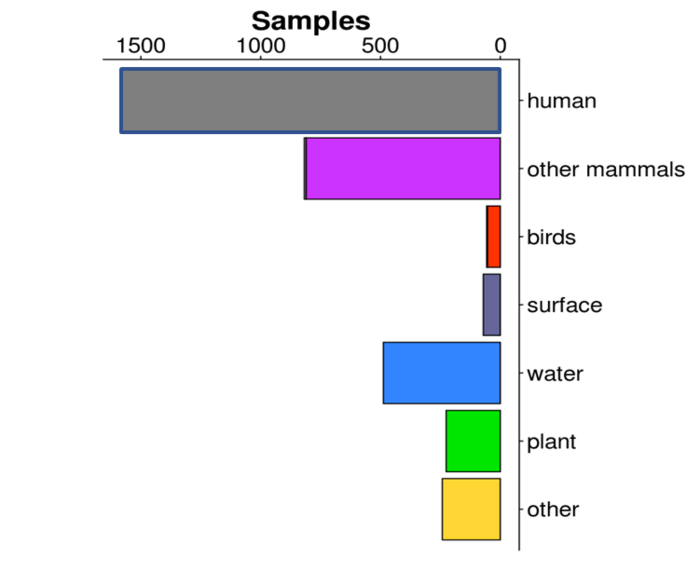 An international team of scientists investigating transmission of a deadly drug resistant bacteria that rivals MRSA, has found that whilst the bugs are found in livestock, pets and the wider environment, they are rarely transmitted to humans through this route.

The researchers, led by Professor Ed Feil from the Milner Centre for Evolution at the University of Bath, investigated the prevalence of Klebsiella, a family of bacterial species that lives harmlessly in the intestines, but can be dangerous if it spreads to other parts of the body.

Klebsiella pneumoniae is the most well-known species in this family, which can cause pneumonia, meningitis, urinary tract infections and infections in the bloodstream.

These bacteria are now highly resistant to antibiotics, with some strains even resistant to carbapenems, one of the so-called “last resort” class of antibiotics which is only used when no other antibiotic treatment works.

Klebsiella has overtaken MRSA as a health problem in the UK, with rates steadily increasing. The WHO has recognised the bacteria as a critical priority healthcare associated pathogen.

As well as being found in hospitals, the microbe has also previously been detected in the environment, including livestock and wastewater, but until now it wasn’t clear whether the bacteria were passed between clinical and non-clinical environments.

In the largest scale study ever conducted, the team collected 6,548 samples over a 15 month period from different locations in and around the Italian city of Pavia, where this pathogen is a major problem in hospitals, and analysed them using whole genome sequencing techniques to detect and identify any Klebsiella bacteria present.

The team swabbed patients in hospitals and healthy ‘carriers’ in the community, took samples from farms, puddles, domestic animals and even house flies and other insects to detect where the bacteria was present.

From this, they found 3,482 isolates including 15 different species of Klebsiella, with half of the positive samples containing K. pneumoniae.

When the team genetically sequenced the bacteria to find which strains were present, they found that there was very little overlap between those bugs found in the hospitals and those found in the environment.

Professor Ed Feil, who led the study, said: “Klebsiella infections are becoming increasingly resistant to antibiotics, so whereas you used to be able to treat most urinary tract infections easily, now it is more common that patients are getting infections that keep coming back and causing problems.

“Klebsiella can also cause pneumonia, which kills around half of patients. These bacteria are a bigger problem in the UK than MRSA.

“Our researchers wanted to find out whether resistant bacterias are now spreading into pets, farms, livestock, plants, and water, and so we wanted to investigate where Klebsiella is found and monitor how it spreads, to inform how best to prevent and control outbreaks.

“We found it was present everywhere, but were surprised that the strains found in hospital were different to those found in the environment, indicating there’s very little transfer between the two habitats: humans nearly always catch this from other humans.

“This confirms the best way to control infection for these bacteria remains stringent hospital hygiene, and that there is less chance that outbreaks may be caused by contact with animals or the environment than previously feared, at least in a high-resource country like Italy.”

Dr Harry Thorpe, from the University of Oslo (Norway) and first author of the paper, said: “The fear was that farmers might get these bacteria from their livestock or soil, that we could get infected by contaminated salad or get sick if we swim in lakes that are infected.

“Our research did not give any evidence of this, however, we did find resistant klebsiella in pets, such as cats and dogs. Vets and owners should be aware of this, as these animals could pose a risk for spreading the bacteria.”

The project consortium, called SpARK, was led by Bath but included researchers from the UK (Wellcome Sanger Institute, Universities of Bristol and Glasgow), Norway, France, Finland and Italy. The work was funded by the Joint Programming Initiative on Antimicrobial Resistance (JPI-AMR), and the MRC, and published in Nature Microbiology.

Professor Feil said: “This is the biggest, most systematic study that has been conducted at the same time in a single geographical location.

“We looked at transmission of strains, however antibiotic resistance can be conferred to other strains very easily when they swap and pick up circular pieces of DNA called plasmids.

“Next we want to track how plasmids are transferred between strains, using a technique called long read sequencing.”

The team has recently been awarded a network grant by the JPIAMR to do this, which builds on a GW4 research community and was supported by the GW4 AMR Alliance.