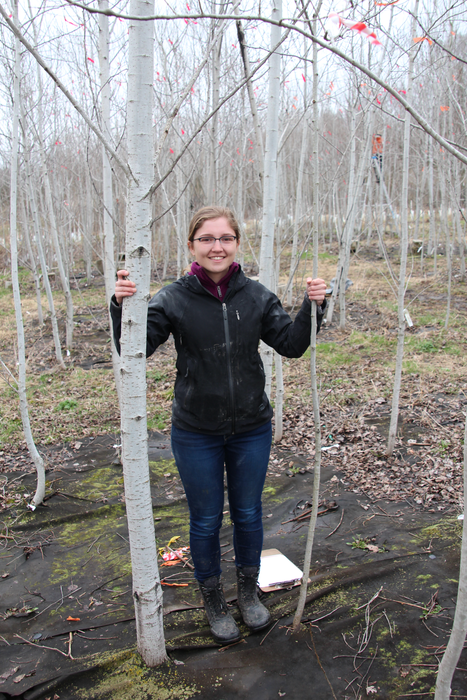 MADISON – Watching paint dry has nothing on watching a forest grow.

That achingly long wait has always made it challenging to study how forests adapt to environmental fluctuations — making it that much harder to predict how they’ll fare in a changing climate or under new pest pressures.

But a new decade-long study by University of Wisconsin­–Madison researchers reveals how aspen stands change their genetic structure over the years as trees balance defending themselves from pests with growth to compete for sunlight. Aspen is the most broadly distributed tree species in North America, and a bellwether species for how forests will adapt to an onslaught of human-influenced environmental changes.

When faced with stiff competition, trees genetically predisposed to prioritize growth win out. But the survivors are less equipped to handle damaging insects.

The experiment demonstrates how evolutionary forces can quickly shape entire forest stands. It also suggests that exposure to a litany of environmental changes can maintain diverse forests capable of responding to different stresses.

The findings are valuable for conservation biologists who want to preserve diverse forest ecosystems in the face of global warming, invasive species and other environmental changes.

“What this work has done is show how key traits — like growth and defense — can be coupled together and how genetic diversity will allow populations to adapt to new stresses,” says Rick Lindroth, a professor of entomology at UW–Madison, who supervised the new study.

Lindroth, lead author and former doctoral student Olivia Cope, and their colleagues at UW–Madison published their findings Sept. 6 in the Proceedings of the National Academy of Sciences.

Aspen often colonize disturbed environments, including the barren landscapes that appear after wildfires such as those in western North America in recent years. Thousands of trees will germinate in a small area, and the race begins to grow tall enough to escape the shade of their neighbors. This intense competition quickly selects for winners and losers.

The scientists simulated this environment by planting young seedlings in dense stands at the Arlington Agricultural Research Station near the UW–Madison campus. Then, they removed three-quarters of the seedlings in half the plots, reducing the amount of competition for sunlight each tree experienced. This produced two types of tree stands: a high-competition environment and a low-competition one.

Some trees were genetically predisposed to prioritize growth, while others put their resources into producing protective chemicals that can deter attacks by insects and mammals. When the trees were five years old, Cope started tracking how fast the trees grew and which survived for the next five years.

The scientists saw that the more trees focused on defense, the shorter they were. The shorter plants were more likely to die as they were shaded out by their taller neighbors. By the end of the study, the tallest trees towered more than 40 feet; the shortest surviving trees were just seven feet tall.

During the study period, there wasn’t a lot of insect damage on the trees. But during 2021, the invasive moth Lymantria dispar ate through almost all the leaves of a nearby experimental aspen stand. The researchers expect that periodic waves of pests like this would reward those aspen forests that balance growth with sufficient defense.

“You have this shifting dynamic because of a changing environment that ultimately selects for the maintenance of diversity within a population,” says Lindroth. “If that diversity has a genetic basis, the reason it can be maintained is that under some conditions one trait may be beneficial whereas under other conditions it may not be.”

Such decade-long experiments are relatively rare. Yet they are increasingly important in an era of progressive and widespread environmental changes, says Lindroth. This is especially true as record wildfires have swept through vast areas of the west, altering the composition of forests.

The study came about after a previous study in which the lab was examining the effect deer browsing had on aspens didn’t work out as planned. That serendipitous repurposing of trees — along with new funding — helped provide the timespan necessary to uncover evolutionary forces at work in the long-lived aspens.

“It takes a long time to understand the ecological responses of trees, let alone evolutionary responses within tree populations,” says Lindroth. “We had the good fortune of having that time.”