AMES, Iowa – By combining seawater data taken from clam shells and thousands of climate simulations, researchers found that 900 years of cooling in the Gulf of Maine were suddenly reversed in the late 1800s. 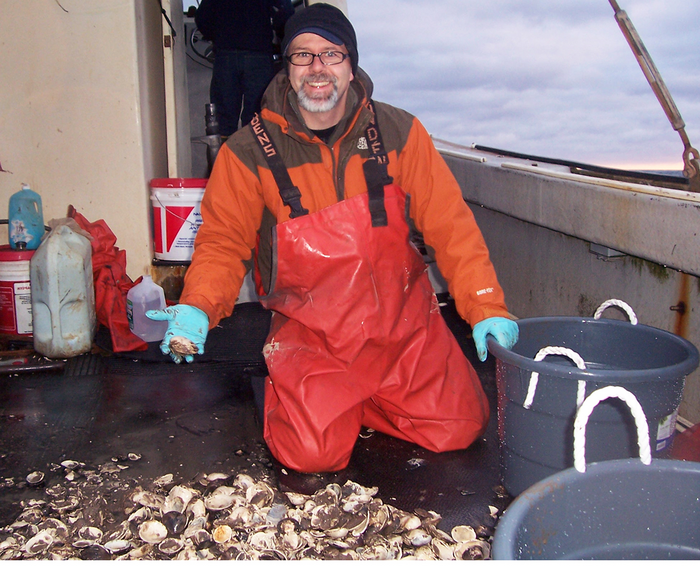 AMES, Iowa – By combining seawater data taken from clam shells and thousands of climate simulations, researchers found that 900 years of cooling in the Gulf of Maine were suddenly reversed in the late 1800s.

Why did that happen?

The “recent, rapid ocean warming” was “likely due to increased atmospheric greenhouse gas concentrations and changes in western North Atlantic circulation,” the researchers wrote in a paper just published by the scientific journal Communications Earth & Environment.

Will that keep happening?

The researchers also wrote that because of projected increases in greenhouse gas concentrations, plus projected weakening of the ocean currents that continually mix warm surface water and cooler, deeper water, “this warming trend in the Gulf of Maine is likely to continue, leading to continued and potentially worsening ecologically and economically devastating temperature increases in the region in the future.”

Nina Whitney, who earned a doctoral degree at Iowa State University in 2020 and is now a research assistant professor at Western Washington University, is the paper’s corresponding author. Alan Wanamaker, an Iowa State professor of geological and atmospheric sciences, is a co-author. (See sidebar for the entire research team.)

The research team traces the change back to the spread of industrialization, writing that cooling caused by the ash and gases produced by volcanic activity and ocean dynamics quickly reversed as machines, manufacturing and industry developed in the 1800s.

Wanamaker has been studying the Gulf of Maine ever since his doctoral studies at the University of Maine some 20 years ago. His field is paleoclimatology; he studies the variations and trends of past climates to understand what will influence future climates.

But, for most of the planet’s history, there were no instruments recording ocean temperature, circulation patterns and other vital signs. It wasn’t until 1905, for example, when the first sea surface temperature sensors were dropped in the Gulf of Maine’s Boothbay Harbor.

So how can researchers know what happened in the Gulf of Maine before 1905?

Wanamaker and his research group have developed a marine history for the Gulf of Maine by collecting geochemical information from the shells of Arctica islandica, the stuff of clam chowder. The shells are useful as a proxy for instrument data because they’re long-lived and create annual shell increments that reliably record environmental data. Oxygen isotopes from the shell layers, for example, can be correlated to seawater temperature. Nitrogen and radiocarbon measurements can provide information about ocean currents and the source of the water they feed into the Gulf of Maine.

By measuring, recording and cross-dating information from 34 shells, Wanamaker’s group was able to characterize Gulf of Maine water from 1761 to 2013. The group also validated its data by comparing shell data with data collected by instruments over the past 117 years. The researchers found general agreement between the data sets – warming at the rate of nearly 4 degrees Fahrenheit per century.

The researchers ran 10,000 climate model simulations and used the historical clam-shell data to corroborate the results. They also changed individual variables in some of the simulations, including greenhouse gas emissions, land use changes and volcanic eruptions.

“It is clear that the mid- to late-1800s were a time of dramatic change in the North Atlantic, as documented both in the Gulf of Maine geochemical records presented and discussed in this study, as well as other records of temperature and ocean circulation changes throughout the North Atlantic,” the researchers wrote.

The models say greenhouse gas emissions have been a major driver of warming in the Gulf of Maine. The researchers said weakening of ocean circulation (the Atlantic Meridional Overturning Circulation), possibly because of greenhouse gas emissions, has also changed the source water entering the Gulf of Maine, with more “Warm Slope Water” originating near the Gulf Stream that carries water from the Gulf of Mexico into the Atlantic and up the East Coast of the U.S., and less from northern sources, including the Labrador Sea.

A separate study co-authored by Wanamaker and recently published in Nature Geoscience also combined natural proxy data (in this case, rain and climate data taken from cave stalagmites in Portugal) with climate simulations. That study found climate changes since industrialization – specifically, there has been unprecedented expansion of a ridge of atmospheric high pressure (called the Azores High), creating unusually dry conditions across western Europe.

“There is a human fingerprint in both instances,” Wanamaker said.

The National Science Foundation provided partial support for the Gulf of Maine and the Azores High projects.

In addition to Alan Wanamaker, of Iowa State, and Nina Whitney, formerly of Iowa State and now with Western Washington University, the Gulf of Maine research team included: