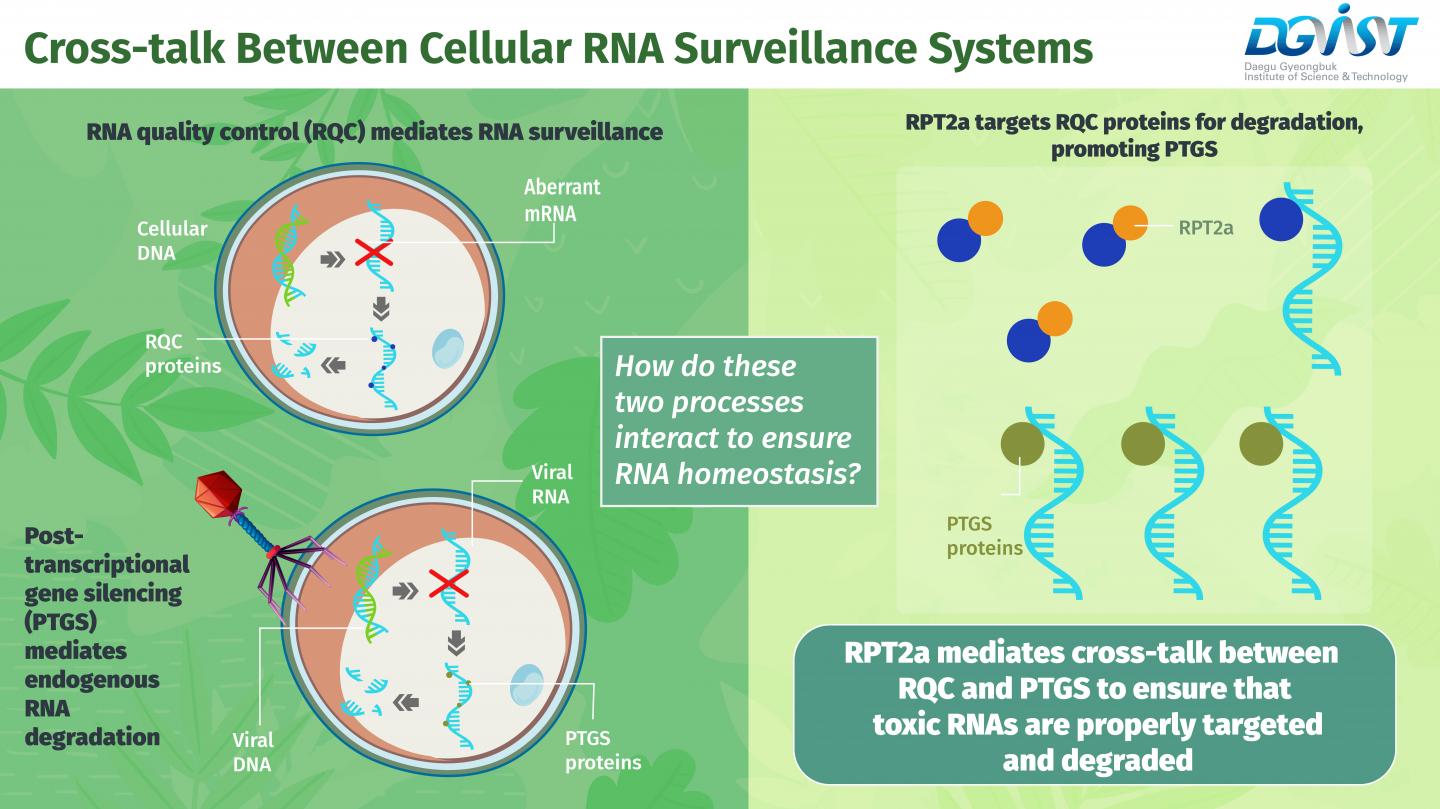 A recent study by a team of scientists in Korea reveals new findings about how various systems involved in cellular surveillance interact. This research is the first to identify a “cross-talk” molecule between these systems. Because these pathways are involved in fighting toxic cellular or foreign substances, the study has various potential applications in antiviral development, gene therapy, and agriculture.

The central dogma of molecular biology describes how, in a cell, the double-stranded DNA is transcribed into a single-stranded molecule called RNA, which is ultimately translated into protein. But, this process is not foolproof, and occasionally, it produces RNA or protein molecules containing errors, which can cause harm to the cell. To protect themselves from these potentially harmful molecules, as well as from foreign viral RNA, cells have developed complex surveillance systems to identify and degrade aberrant RNAs and proteins. For example, the RNA quality control (RQC) system targets the cell’s own error-containing RNAs, while post-transcriptional gene silencing (PTGS) primarily targets foreign RNAs (such as those of invading viruses) by “silencing” their genes. Similarly, a separate cellular system handles protein quality control. To maintain a proper balance of cellular processes, these surveillance systems must be tightly regulated. For example, as both RQC and PTGS target RNAs, when one process is suppressed, the other gets activated. But, exactly how the systems interact has so far remained a mystery.

In a new study published in Nature Plants, scientists at the Daegu Gyeongbuk Institute of Science and Technology, Korea, led by Prof June M. Kwak, uncovered a new link between the pathways involved in RNA degradation. Talking about the motivation for their research, Prof Kwak says, “We wanted to investigate novel mechanisms controlling gene silencing by small regulatory RNAs.”

For their investigation, the scientists designed a cell type-specific genetic system in the plant Arabidopsis, which allowed them to monitor RNA silencing. The green fluorescent protein gene was used as a target–or prey–molecule and was paired with a molecular construct called Orion, which exploits the PTGS system to target and degrade the prey RNA. Plant cells expressing the prey without Orion show green fluorescence, whereas those that express both the prey and Orion, referred to as PORI cells, show virtually no fluorescence.

Using this system, the researchers identified a defective PORI plant that nonetheless exhibited fluorescence. This plant carried a mutation in a protein called RPT2a, which is known to be part of the protein quality control system. Further investigations revealed that RPT2a is critical to the cross-talk between RQC and PTGS. Specifically, they found that RPT2a targets RQC proteins for degradation, which reduces the influence of RQC and promotes the role of PTGS. This is particularly beneficial when foreign RNA is present in the cell, as unlike RQC, PTGS includes an amplification process that alerts nearby cells to further silence the foreign RNA.

This study is the first in the world to show the role of RPT2a in maintaining the balance between the two RNA-degrading systems in a cell. Prof Kwak is optimistic about potential implications for this study. He says, “The RNA surveillance machinery involved here is the same used in other plant, animal, and human cells in response to viral infections or any foreign genetic material. Therefore, a better understanding of the working of these systems will be useful for developing new vaccines/antivirals to treat diseases, or implementing genetic manipulation, such as in agriculture or gene therapy.”

Dr June M. Kwak is a Professor at the Lab of Cell Signaling & Development, DGIST. His research focuses on understanding how environmental changes cause changes in plant growth and development. Prof Kwak uses multidisciplinary approaches in his research, including systems-level analysis, genetics, and cell and molecular biology. He has over 75 research articles to his credit, published in prestigious journals like Cell, Science, Nature, and PNAS. Moreover, he has won a number of national and international awards.

Surface effects affect the distribution of hydrogen in metals

Scienmag May 30, 2019
Credit: NIST Physicists at the National Institute of Standards and Technology (NIST) have teleported a…