BOSTON – New research reveals factors that control the interplay of natural killer (NK) cells—which are part of the body’s innate, or first line, immune response—with tumor cells, viral infections, and solid organ transplants. The results, which are published in Science Advances and were discovered by investigators at Massachusetts General Hospital (MGH), could be used to help protect people from cancer, invading pathogens, autoimmunity, inflammatory diseases, and transplant rejection. 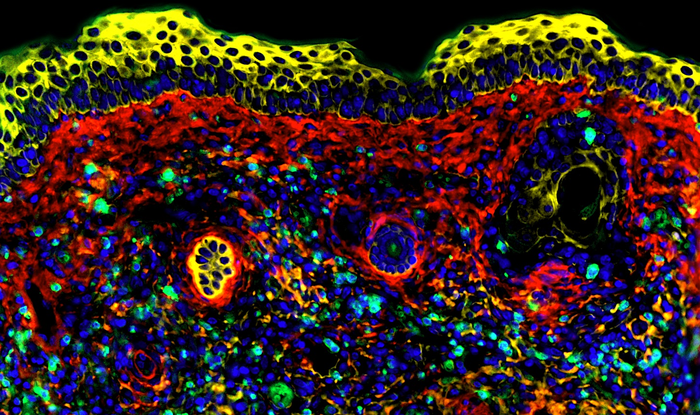 BOSTON – New research reveals factors that control the interplay of natural killer (NK) cells—which are part of the body’s innate, or first line, immune response—with tumor cells, viral infections, and solid organ transplants. The results, which are published in Science Advances and were discovered by investigators at Massachusetts General Hospital (MGH), could be used to help protect people from cancer, invading pathogens, autoimmunity, inflammatory diseases, and transplant rejection.

NK cells can effectively kill target cells in the blood, but they fail to kill infected and cancerous cells in tissues and organs like the skin, gastrointestinal tract, pancreas and breast. “This profound lack of NK cell killing function in solid organs has perplexed the field of NK cell biology for the last 60 years,” says Shawn Demehri, MD, PhD, a cancer immunologist, dermatologist and principal investigator at the MGH Center for Cancer Immunology and the Cutaneous Biology Research Center. Demehri’s work in recent years has uncovered a novel explanation for why NK cells lose their ability to kill target cells in solid organs: Organs are made of cells embedded in a dense extracellular matrix (ECM)—an elaborate matrix of proteins that form a scaffold to maintain organ structure and integrity. Interactions between NK cells and ECM proteins lead to an immediate switch in NK cell function from killer cells to helper cells when they exit the blood vessels and enter solid organs. As helper cells, NK cells produce molecules that activate and support other neighboring immune cells.

Demehri and his team postulate that NK cells’ rapid killer response in the blood and delayed helper response in tissues and organs can be explained by an evolutionary selection pressure to prolong human survival. “Infection of the blood requires immediate control by NK cells to ensure host survival; however, the suppression of a direct killer function of NK cells in the peripheral tissues may prevent over-reaction to localized insults, which could predispose the patient to excessive tissue damage and the development of chronic inflammation,” says Demehri. “Meanwhile, a helper function for the development of an overall more targeted, appropriately strong adaptive immune response may be best suited to combat viral infections in peripheral tissues.”

In this latest work involving skin transplantation and mouse melanoma models, the investigators identified collagens and elastin—major ECM proteins that are abundant in solid organs—to be the key regulators of NK cell function in tissues and cancers.

For example, the scientists showed for the first time that losartan, a drug that is commonly used to treat hypertension, can cause a previously resistant melanoma to become sensitive to NK cell killing by blocking collagen deposition in the tumor. The finding is significant because collagen is often abundant in solid cancers, including breast and pancreatic cancers.

“Our data strongly support the concept of blocking collagen–NK cell interactions in combination with current immunotherapies for optimal treatment of solid cancers,” says Vyas. “And our findings provide a strong rationale for future research to fully understand how ECM proteins regulate NK and other immune cell responses in health and disease. This will greatly expand the development of future therapies that exploit the interactions between ECM proteins and the immune system in the treatment of a large variety of diseases.”

Funding was provided by the Burroughs Wellcome Fund, the Sidney Kimmel Foundation, and the National Institutes of Health.

About the Massachusetts General Hospital
Massachusetts General Hospital, founded in 1811, is the original and largest teaching hospital of Harvard Medical School. The Mass General Research Institute conducts the largest hospital-based research program in the nation, with annual research operations of more than $1 billion and comprises more than 9,500 researchers working across more than 30 institutes, centers and departments. In August 2021, Mass General was named #5 in the U.S. News & World Report list of “America’s Best Hospitals.”

RTM consults for Bristol Myers Squibb. The other authors declare no competing interests.