The deep sea contains more than 90% of the water in our oceans, but only about a third of all fish species. Scientists have long thought the explanation for this was intuitive — shallow ocean waters are warm and full of resources, making them a prime location for new species to evolve and thrive. But a new University of Washington study led by Elizabeth Miller reports that throughout Earth’s ancient history, there were several periods of time when many fish actually favored the cold, dark, barren waters of the deep sea. 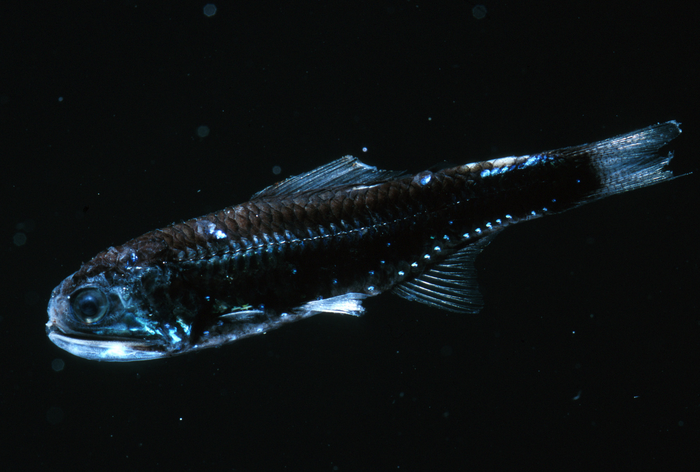 The deep sea contains more than 90% of the water in our oceans, but only about a third of all fish species. Scientists have long thought the explanation for this was intuitive — shallow ocean waters are warm and full of resources, making them a prime location for new species to evolve and thrive. But a new University of Washington study led by Elizabeth Miller reports that throughout Earth’s ancient history, there were several periods of time when many fish actually favored the cold, dark, barren waters of the deep sea.

“It’s easy to look at shallow habitats like coral reefs, which are very diverse and exciting, and assume that they’ve always been that way,” said Miller, who completed the study as a postdoctoral researcher in the UW School of Aquatic and Fishery Sciences and is now a postdoctoral fellow at the University of Oklahoma. “These results really challenge that assumption, and help us understand how fish species have adapted to major changes to the climate.”

The deep sea is typically defined as anything below about 650 feet, the depth at which there is no longer enough sunlight for photosynthesis to occur. That means there is far less food and warmth than in the shallows, making it a difficult place to live. But by analyzing the relationships of fish using their genetic records going back 200 million years, Miller was able to identify a surprising evolutionary pattern: the speciation rates — that is, how quickly new species evolved — flip-flopped over time. There were periods lasting tens of millions of years when new species were evolving faster in the deep sea than in more shallow areas.

In some ways, this discovery raised more questions than it answered. What was causing fish to prefer one habitat over another? What made some fish able to move into the deep sea more easily than others? And how did these ancient shifts help create the diversity of species we have today?

When Miller mapped these flip-flopping speciation rates onto a timeline of Earth’s history, she was able to identify three major events that likely played a role.

“The first was the breakup of Pangea, which occurred between 200 and 150 million years ago,” said Miller. “That created new coastlines and new oceans, which meant there were more opportunities for fishes to move from shallow to deep water. There were suddenly a lot more access points.”

Next was the Cretaceous Hot Greenhouse period, which occurred approximately 100 million years ago and marked one of the warmest eras in Earth’s history. During this time, many continents were flooded due to sea-level rise, creating a large number of new, shallow areas across the earth.

“It was around this period that we really see shallow-water fishes take off and diversify,” said Miller. “We can trace a lot of the species diversity we see in the shallows today to this time.”

The third event was yet another major climatic change about 15 million years ago, known as the middle Miocene climatic transition. This was caused by further shifting of the continents, which caused major changes in ocean circulation and cooled the planet — all the way down to the deep sea.

“Around this time we see deep-sea speciation rates really speed up,” Miller said. “This was especially driven by cold-water fishes. A lot of the species you see today off the coasts of Washington and Alaska diversified during this time.”

But climate changes alone don’t explain how fish came to colonize the deep sea in the first place. Not every species has the right combination of traits to survive in deeper water and make use of the relatively limited resources beyond the reach of sunlight.

“To evolve into a new species in the deep sea, first you have to get there,” said Miller. “What we found was that not only were the speciation rates flip-flopping through time, but what the deep-sea fishes looked like was as well.”

The earliest fish that were able to transition into the deep sea tended to have large jaws. These likely gave them more opportunities to catch food, which can be scarce at depth. The researchers found that much later in history, fish that had longer, tapered tails tended to be most successful at making the transition to deep water. This allowed them to conserve energy by scooting along the seafloor instead of swimming in the water column.

“If you look at who lives in the deep sea today, some species have a tapered body and others have big, scary, toothy jaws,” Miller said. “Those two body plans represent ancestors that colonized the deep sea millions of years apart.”

While these events might seem like ancient history, they may be able to teach us about how today’s changing climate will affect life in our oceans. Miller hopes that future research can build on these findings and investigate how modern deep-sea fish will respond to climate change, and potentially inform conservation efforts.

“What we learned from this study is that deep-sea fishes tend to do well when oceans are colder, but with climate change, oceans are getting warmer,” she said. “We can expect that this is really going to impact fish in the deep-sea in the coming years.”