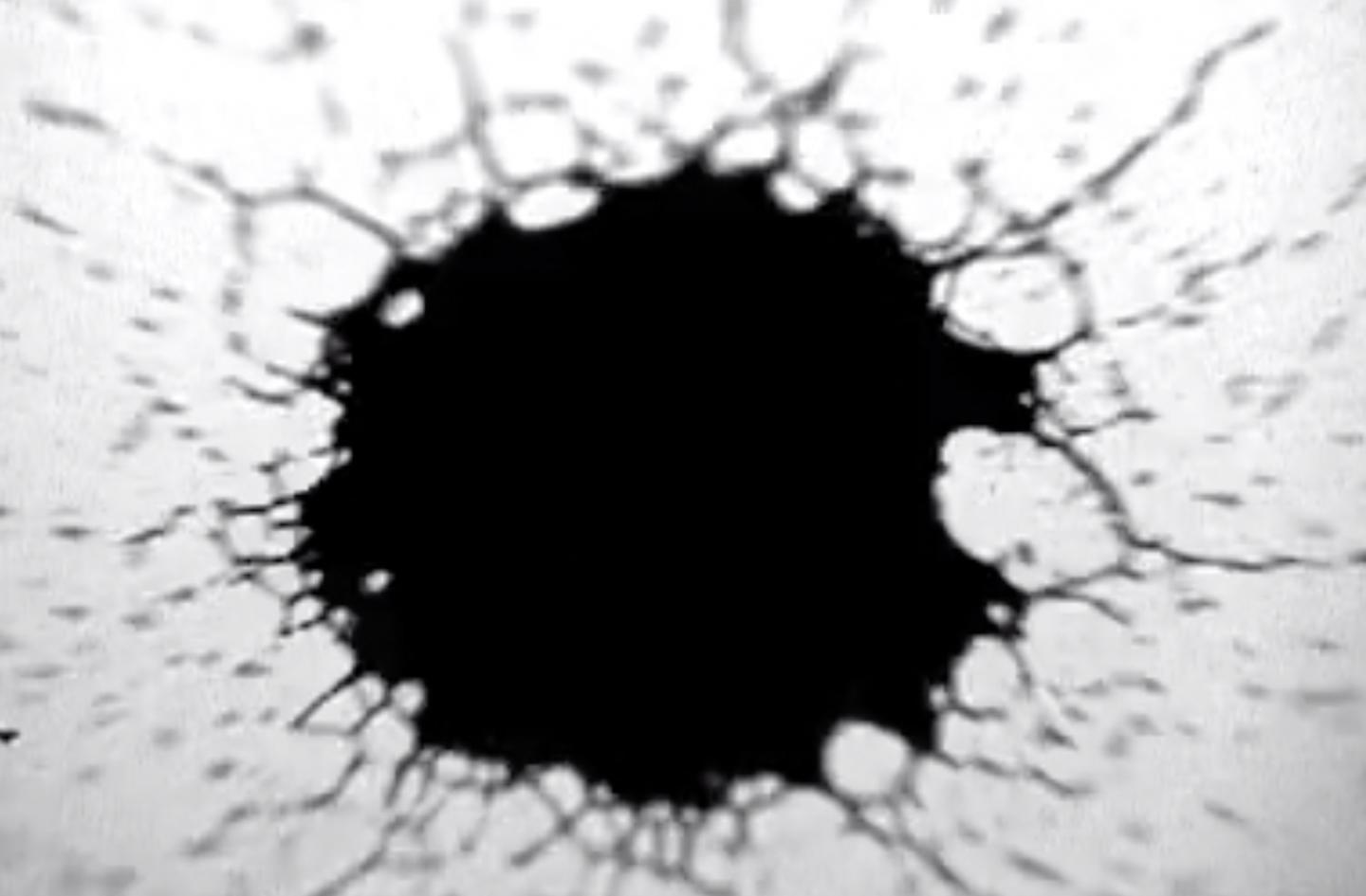 PROVIDENCE, R.I. [Brown University] — Splash some water on a hot skillet, and you’ll often see the droplets sizzle and quickly evaporate. But if you really crank up the heat, something different happens. The droplets stay intact, dancing and skittering over the surface in what’s known as the Leidenfrost effect. Now a team of researchers has detailed how these Leidenfrost droplets meet their ultimate fate.

In a paper published in Science Advances, the team shows that Leidenfrost droplets that start off small eventually rocket off the hot surface and disappear, while larger drops explode violently with an audible “crack.” Whether the droplet finally explodes or escapes depends on its initial size and the amount of solid contaminants — ambient dust or dirt particles — the droplet contains.

In addition to explaining the cracking sound that Johann Gottlob Leidenfrost reported hearing in 1756 when he documented the phenomenon, the findings could prove useful in future devices — cooling systems or particle transport and deposition devices — that may make use of the Leidenfrost effect.

“This answers the 250-year-old question of what produces this cracking sound,” said Varghese Mathai, a postdoctoral researcher at Brown University and the study’s co-lead author. “We couldn’t find any prior attempts in the literature to explain the source of the crack sound, so it’s a fundamental question answered.”

The research, published in Science Advances, was a collaboration between Mathai at Brown, co-lead author Sijia Lyu from Tsinghua University and other researchers from Belgium, China and the Netherlands.

In the years since Leidenfrost observed this peculiar behavior in water droplets, scientists have figured out the physics of how the levitation phenomenon occurs. When a liquid drop comes into contact with a surface that’s well beyond the liquid’s boiling point, a cushion of vapor forms beneath the droplet. That vapor cushion supports the drop’s weight. The vapor also insulates the drop and slows its rate of evaporation while enabling it to glide around as if it were on a magic carpet. For water, this happens when it encounters a surface in excess of around 380 degrees Fahrenheit. This Leidenfrost temperature varies for other liquids like oils or alcohol.

A few years back, a different research team observed the ultimate fate of tiny Leidenfrost drops, showing that they steadily shrink in size and then suddenly launch off the surface and disappear. But that didn’t explain the cracking sound Leidenfrost heard, and no one had done a detailed study to see where that sound came from.

For this new study, the researchers set up cameras at recording speeds up to 40,000 frames per second and sensitive microphones to observe and listen to individual drops of ethanol above their Leidenfrost temperatures. They found that when the droplets started out relatively small, they behaved in the way that the previous researchers had observed — shrinking and then escaping. At a certain point, when these droplets become sufficiently small and lightweight, the vapor flow around them causes them to suddenly fling into the air where they finally disappear.

But when droplets start out a millimeter in diameter or larger, the study showed, something very different happens. The larger drops steadily shrink, but they don’t get small enough to fly away. Instead, the larger droplets steadily sink toward the hot surface below. Eventually the droplet makes contact with the surface, where it explodes with an audible crack. So why don’t those larger droplets shrink down enough to take flight like the droplets that start out smaller? That, the researchers say, is a matter of contaminants.

No liquid is ever perfectly pure. They all have tiny particle contaminants — dust and other particles that influence the Leidenfrost process. As droplets shrink, the concentration of particle contaminants within them increases. That’s especially true for drops that start out larger because they have a higher absolute of particles to start with. So for drops that start out large, the researchers surmised, the concentration of contaminants can become so high that the particles accumulate into a solid shell along the droplet’s surface. That shell cuts off the supply of vapor that forms the cushion beneath. As a result, the droplet sinks toward the hot surface beneath and explodes on contact.

To test this idea, the researchers observed liquid droplets that had different levels of contamination with titanium dioxide microparticles. They found that as the contaminant level increased, so did the average size of the droplets at the moment of explosion. The research was also able to image the contaminant shells among the explosion debris.

Taken together, the evidence suggests that even minute quantities of contaminants play a key role in determining the fate of Leidenfrost droplets. The finding could have practical applications beyond just explaining the cracking sound that Leidenfrost first reported.

Recent research has shown that the direction in which Leidenfrost drops move can be controlled. That could make them useful as levitating particle carriers in microelectronic fabrication processes. There’s also the possibility of using Leidenfrost drops in heat exchangers that are designed to keep electronic components at specific temperatures.

“You can use these contaminants to change the lifetime of a Leidenfrost droplet,” Mathai said. “So you can figure out in principle where it’s going to deposit the particles, or control how long the heat transfer persists by fine-tuning the amount of contaminants.”

The research results could potentially be used to develop new purity testing methods for water and other liquids because the size at which droplets explode is so closely linked to its contaminant load.

Scienmag Dec 11, 2019
New research shows that for every £1 invested in pollinator monitoring schemes, at least £1.50 can be saved, from…

What are the northern lights? (video)