Study reveals Ebola virus can hide in brain, persist even years after treatment

In a groundbreaking study published today, scientists describe how Ebola virus, which can persist in certain areas of the body, can re-emerge to cause fatal disease—even long after treatment with monoclonal antibodies. Their research, using a nonhuman primate model of Ebola virus infection, appears on the cover of today’s edition of Science Translational Medicine. 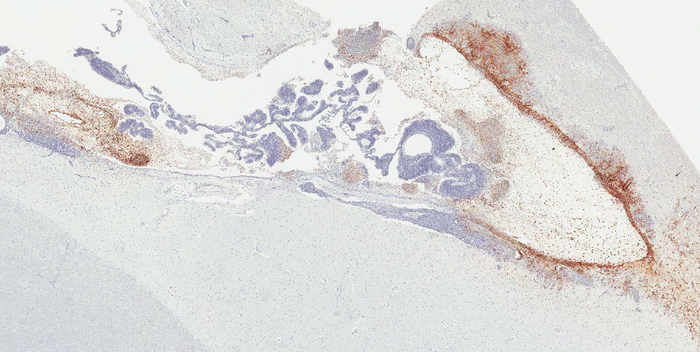 In a groundbreaking study published today, scientists describe how Ebola virus, which can persist in certain areas of the body, can re-emerge to cause fatal disease—even long after treatment with monoclonal antibodies. Their research, using a nonhuman primate model of Ebola virus infection, appears on the cover of today’s edition of Science Translational Medicine.

Some recent Ebola virus disease outbreaks in Africa have been linked to persistent infection in patients who had survived previous outbreaks, according to the paper’s senior author, Xiankun (Kevin) Zeng, Ph.D. In particular, the 2021 outbreak of Ebola virus disease in Guinea re-emerged from a persistently infected survivor of the previous major outbreak at least five years ago. However, the exact “hiding place” of persistent Ebola virus and the underlying pathology of subsequent recrudescent, or recurring, disease in survivors—especially those treated with standard-of-care monoclonal antibody therapeutics—were largely unknown. So Zeng and his team at the U.S. Army Medical Research Institute of Infectious Diseases used a nonhuman primate model, the one that most closely recapitulates Ebola virus disease in humans, to address these questions.

“Ours is the first study to reveal the hiding place of brain Ebola virus persistence and the pathology causing subsequent fatal recrudescent Ebola virus-related disease in the nonhuman primate model,” Zeng explained. “We found that about 20 percent of monkeys that survived lethal Ebola virus exposure after treatment with monoclonal antibody therapeutics still had persistent Ebola virus infection—specifically in the brain ventricular system, in which cerebrospinal fluid is produced, circulated, and contained—even when Ebola virus was cleared from all other organs.”

Recrudescence has previously been reported in human survivors of Ebola virus disease, according to the authors. For example, a British nurse experienced Ebola virus relapse in the brain, suffering from meningoencephalitis nine months after recovering from severe Ebola virus disease. She had received therapeutic antibodies during the 2013-2016 outbreak in Western Africa, the largest such outbreak to date. In addition, a vaccinated patient who had been treated with monoclonal antibody therapeutics for Ebola virus disease six months earlier relapsed and died at the end of the 2018-2020 outbreak in the Democratic Republic of the Congo. Unfortunately, that case also led to many subsequent human-to-human transmissions.

During the past several years, Zeng’s team at USAMRIID has performed systematic studies of Ebola virus persistence using nonhuman primate survivors as a model. That research showed that the virus, despite being cleared from all other organs, can hide and persist in specific regions of immune-privileged organs—such as the vitreous chamber of eyes, the seminiferous tubules of testes, and the ventricular system of brain reported in this study.

“The persistent Ebola virus may reactivate and cause disease relapse in survivors, potentially causing a new outbreak,” said USAMRIID’s Jun Liu, Ph.D., who served as co-first author of the current paper with John C. Trefry, Ph.D.

Ebola virus causes one of the deadliest infectious diseases known to humankind. It is still a major threat in Africa, and there were three outbreaks in Africa in 2021 alone, according to the World Health Organization. Global research efforts have led to regulatory approval for two vaccines and two monoclonal antibody therapeutics to prevent and treat Ebola virus disease in recent years. Those therapeutics are now part of the standard of care for infected patients.

“Fortunately, with these approved vaccines and monoclonal antibody therapeutics, we are in a much better position to contain outbreaks,” added Zeng. “However, our study reinforces the need for long-term follow-up of Ebola virus disease survivors—even including survivors treated by therapeutic antibodies—in order to prevent recrudescence. This will serve to reduce the risk of disease re-emergence, while also helping to prevent further stigmatization of patients.”

About the U.S. Army Medical Research Institute of Infectious Diseases:

For over 53 years, USAMRIID has provided leading edge medical capabilities to deter and defend against current and emerging biological threat agents. The Institute is the only laboratory in the Department of Defense equipped to safely study highly hazardous viruses requiring maximum containment at Biosafety Level 4. Research conducted at USAMRIID leads to vaccines, drugs, diagnostics, and training programs that protect both Warfighters and civilians. The Institute’s unique science and technology base serves not only to address current threats to our Armed Forces, but is an essential element in the medical response to any future biological threats that may confront our nation. USAMRIID is a subordinate laboratory of the U.S. Army Medical Research and Development Command. For more information, visit www.usamriid.army.mil.

The animal studies described in this paper were supported by the Biomedical Advanced Research and Development Authority.