TAMPA, Fla. (June 2, 2022) – A new study reveals that 68 percent of COVID-19 deaths during the first year of the pandemic were adults in low socioeconomic positions (SEP) employed in labor, service and retail jobs that require on-site attendance and prolonged close contact with others. 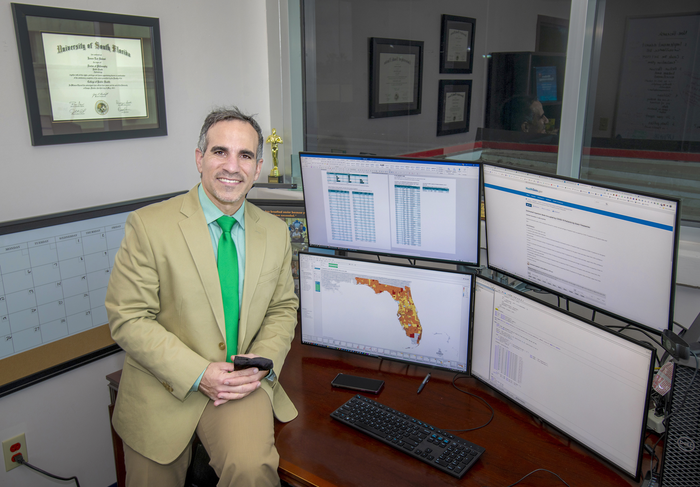 TAMPA, Fla. (June 2, 2022) – A new study reveals that 68 percent of COVID-19 deaths during the first year of the pandemic were adults in low socioeconomic positions (SEP) employed in labor, service and retail jobs that require on-site attendance and prolonged close contact with others.

In collaboration with a team of epidemiologists from the COVKID Project, Salemi, an associate professor in USF’s College of Public Health, launched a national investigation into COVID-19 deaths in 2020 with data released by the U.S. National Center for Health Statistics.

The study, published in the International Journal of Environmental Research and Public Health, analyzed nearly 70,000 adults, ages 25 to 64, who died from COVID-19.

“The degree to which it takes a toll on communities is very unevenly distributed and we wanted to call attention to that issue,” Salemi said.

The National Center for Health Statistics uses one’s level of education as a measure of socioeconomic status because it is considered a more stable indicator of SEP over time. In tandem, the team categorized each person’s SEP by their level of education – low SEP adults had no education beyond high school, intermediate SEP had at least one year of college attendance and high SEP adults had at minimum a bachelor’s degree.

The findings reveal a person’s level of education is strongly associated with occupation segregation – with the majority of low SEP adults employed in working-class jobs across all gender, race and ethnicity groups in the United States.

Salemi and the team confirmed that hazardous conditions of work, such as working in close proximity with others, were primary drivers of disparities in COVID-19 mortality rates.

“If we were to immediately heed the calls to return to ‘normal’ and stop worrying about community spread of the virus, there are certain subsets and members of our community who are going to suffer way more so than other members – and these people have already borne the disproportionate brunt of this pandemic,” Salemi said.

As a result, Salemi says the most urgent implication of this study points to possible actions that could be considered to protect the working class from infection, such as strengthening labor laws, empowering the U.S. Occupational Safety and Health Administration, adopting safety and health hazard policies and allowing unions to organize for greater protections for worker safety.

Salemi hopes to expand on this study with mortality data from 2021 and beyond.

Joint Effects of Socioeconomic Position, Race/Ethnicity, and Gender on COVID-19 Mortality among Working-Age Adults in the United States