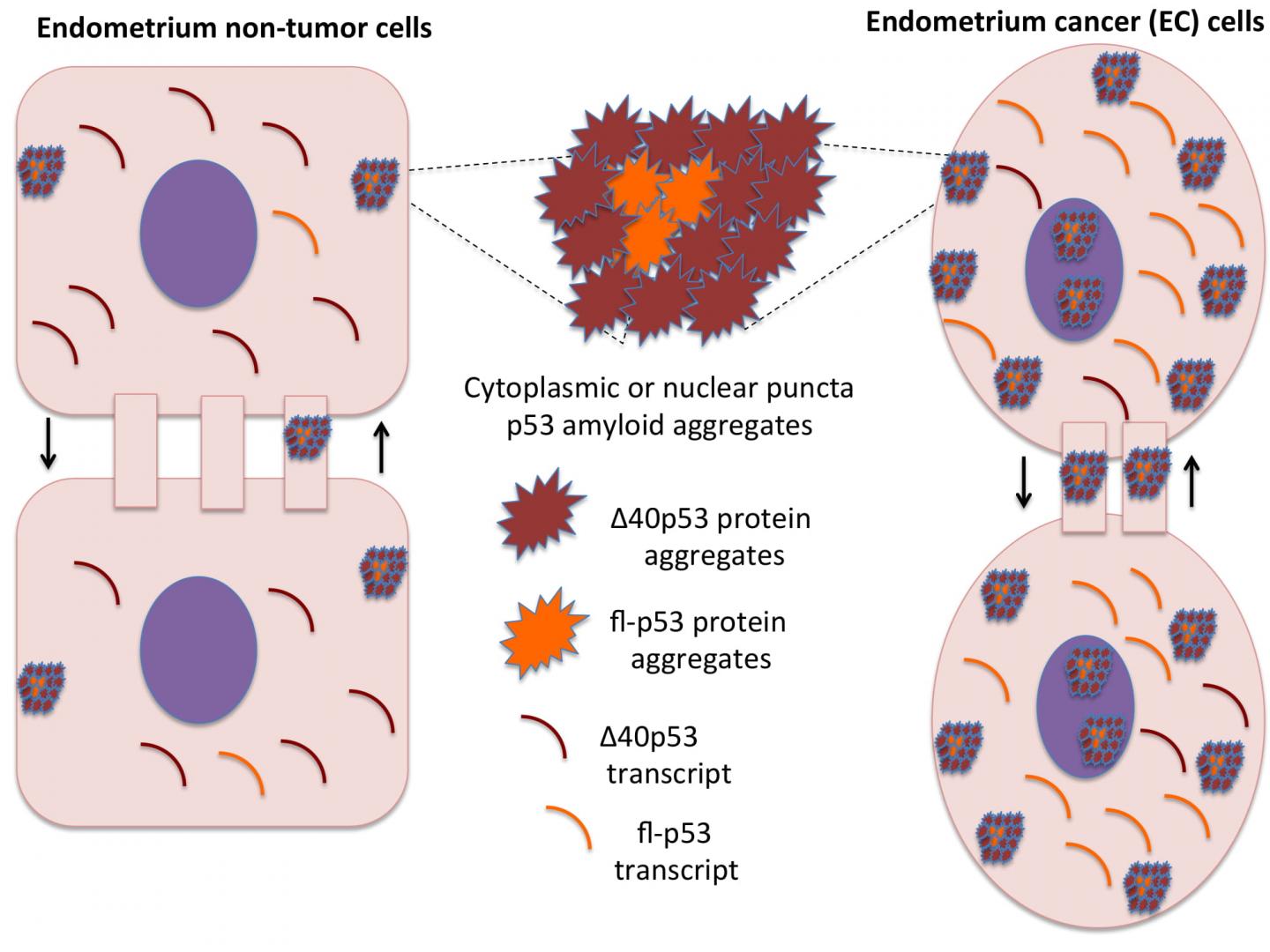 Brazilian scientists identify the predominant presence of a truncated variant of the p53 protein in amyloid aggregates in endometrial cancer cells. Such structures are related to the progression of this tumor.

A finding by Brazilian researchers promises new perspectives for the treatment of Type 2 endometrial cancer, the most aggressive form of one of the most frequent gynecological tumors. Using in-vitro tests, they identified a high accumulation of aggregates formed by a truncated variant of p53 protein, termed Δ40p53. The variant was found in the cytoplasm of cancer cells. This is the first time that scientists have observed variants of p53 forming amyloid aggregates in tumor cells (similar to that found with mutant whole p53).

Called the guardian of the human genome, p53 is a protein that normally inhibits the onset and growth of tumors by regulating the cell cycle and protecting DNA. Mutations in the genes coding for this protein, however, may promote loss of function and gain of a new behavior, detrimental to the cell. These genetic changes occur in more than half of cancer cases worldwide, and one of the consequences is the formation of p53 amyloid aggregates, resulting in the unbridled growth of tumor cells.

However, not all tumors have mutations in the p53 gene. In some cases, they present alterations in other cellular and genetic mechanisms related to this protein, such as its location in the cell or the abnormal presence of its truncated isoforms. These variants of the protein have been known for at least 14 years, but scientists didn’t know whether they contributed to the formation of p53 protein aggregates. This is the phenomenon the Brazilians set out to study.

The researchers observed that, in the case of endometrial cancer, the Δ40p53 isoform plays the predominant role, presenting higher aggregation properties than the full p53 in the cancer cells. The novelty in this recent work is the higher propensity of the truncated form to assemble into the amyloid clumps, especially in the cytoplasm, in contrast to mutant full-length p53 that tends to aggregate in the nucleus. “This shows that these variants can modulate the aggregation state of p53”, explains Etel Gimba.

Based on these results it should be possible to find compounds capable of inhibiting the formation of these aggregates through a specific action on the truncated variants. “One of the major difficulties [in cancer treatment] is being able to undo these aggregates as a therapeutic strategy”, says Etel Gimba. “By specifically undoing the aggregates formed by these variants, we increase the chances of reversing their misfolded, aggregated state, opening the door for the body to discard the aberrant cells”, adds the researcher.

This may represent a revolution in the treatment of endometrial cancer, since changes in p53 are associated with Type 2 of the disease, with a high mortality rate. It is crucial for the prognostic evaluation of endometrial tumors. “Patients who have alterations in the p53 pathway since the beginning of the development of the tumors will present very aggressive tumors, difficult to treat”, highlights the research coordinator.

The tests were done in vitro, with the use of immunofluorescence, light-scattering kinetics, circular dichroism and transmission electron microscopy.

The article entitled “Loss of the p53 transactivation domain results in high amyloid aggregation of the Δ40p53 isoform in endometrial carcinoma cells” can be read in the Journal of Biological Chemistry.

The sense of touch is formed in the brain before birth

Gold adds the shine of reversible assembly to protein cages

Scienmag Jun 18, 2019
An international team including researchers from the University of Tsukuba reports the gold led reversible…