LAWRENCE — During experiments in animal models, researchers at the University of Kansas have discovered a possible new approach to immunization against Alzheimer’s disease (AD). 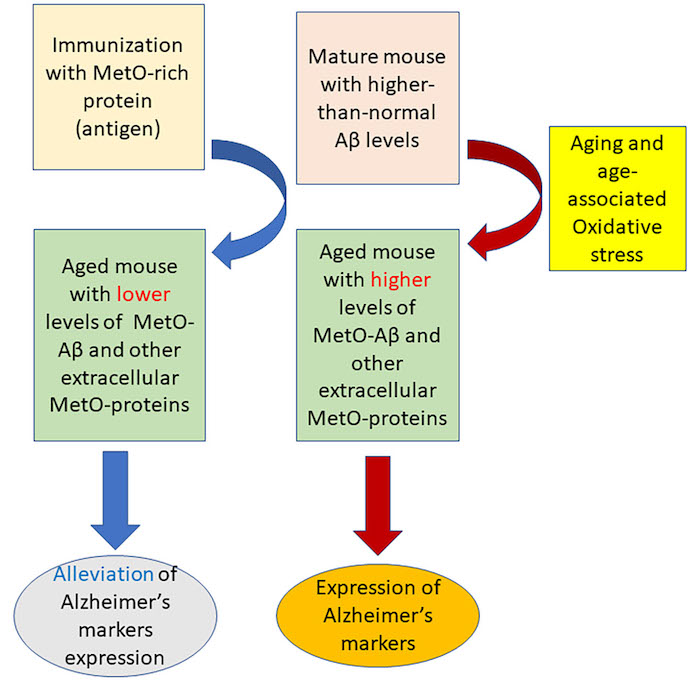 LAWRENCE — During experiments in animal models, researchers at the University of Kansas have discovered a possible new approach to immunization against Alzheimer’s disease (AD).

Their method uses a recombinant methionine (Met)-rich protein derived from corn that was then oxidized in vitro to produce the antigen: methionine sulfoxide (MetO)-rich protein. This antigen, when injected to the body, goads the immune system into producing antibodies against the MetO component of beta-amyloid, a protein that is toxic to brain cells and seen as a hallmark of Alzheimer’s disease. The findings have been just published in the peer-reviewed open-access journal Antioxidants.

“As we age, we have more oxidative stress, and then beta-amyloid and other proteins accumulate and become oxidized and aggregated – these proteins are resistant to degradation or removal,” said lead researcher Jackob Moskovitz, associate professor of pharmacology & toxicology at the KU School of Pharmacy. “In a previous 2011 published study, I injected mouse models of Alzheimer’s disease with a similar methionine sulfoxide-rich protein and showed about 30% reduction of amyloid plaque burden in the hippocampus, the main region where damage from Alzheimer’s disease occurs.”

The MetO-rich protein used by Moskovitz for the vaccination of AD-model mice is able to prompt the immune system to produce antibodies against MetO-containing proteins, including MetO-harboring beta-amyloid. The introduction of the corn-based MetO-rich protein (antigen) fosters the body’s immune system to produce and deploy the antibodies against MetO to previously tolerated MetO-containing proteins (including MetO-beta-amyloid), and ultimately reduce the levels of toxic forms of beta-amyloid and other possible proteins in brain.

In the new follow-up study, Moskovitz and his co-authors injected the MetO-rich protein into 4-month-old AD-model mice that were genetically modified to develop the familial form of Alzheimer’s disease. Subsequent testing showed that this approach provoked the mice’s immune systems into producing antibodies that could alleviate the presence of AD phenotypes at an older age (10-month-old mice).

“This treatment induced the production of anti-MetO antibody in blood-plasma that exhibits a significant titer up to at least 10 months of age,” according to the authors.

In a series of tests, the KU researchers assessed the memory of injected mice against similar mice that didn’t receive the corn-based methionine sulfoxide.

“We measured short-term memory capability through a ‘Y’ maze, and that’s very important in Alzheimer’s disease — because when people get Alzheimer’s, their short-term memory is going away, while the old memories are still there,” Moskovitz said. “You put a mouse in a maze shaped like a ‘Y’ so they can go either the left or right arm. But then you introduce a third arm in the middle and if they recognize the third arm as new, they’ll spend more time exploring that new arm because they have curiosity. If they don’t even notice there’s a third arm — because they forget it the minute after they saw it — they will spend more time in right or left.”

According to Moskovitz, there was a roughly 50% improvement in the memory of mice injected with the methionine sulfoxide (MetO)-rich protein versus the control.

In another experiment, mice were tasked with locating a platform in a water maze.

“We gave them six days to learn, and even the ones with Alzheimer’s eventually learn the location of the platform — but we found after the second day there was a big difference, the injected mice with the antigen learn much faster than the nonimmunized mice,” Moskovitz said. “Then we remove the platform to see if they remember where the platform was just by memory, not by looking. And again, we saw a big difference. The antigen-immunized mice remember and spend more time in the vicinity of the platform they were trained on compared to the nonimmunized control mice.”

In addition to short-term memory improvement, the study showed the antigen-injected mice exhibited better long memory capabilities, reduced beta-amyloid levels in both blood-plasma and the brain, as well as “reduced beta-amyloid burden and MetO accumulations in astrocytes in hippocampal and cortical regions; reduced levels of activated microglia; and elevated antioxidant capabilities (through enhanced nuclear localization of the transcription factor Nrf2) in the same brain regions.”

The researchers found the data collected in the study likely are translational, suggesting active immunization “could give a possibility of delaying or preventing AD onset.”

Moskovitz said such an immunization could be given to people as the risk of Alzheimer’s disease increases later in life, “around the time people are told to go get a colonoscopy for the first time in their 50s or 60s,” he said. “Further booster shots could maintain immunization, a process which people are so familiar with from the COVID vaccines.”

Moskovitz said the next steps in this line of research would be to conduct pre-clinical and clinical trials in humans in conjunction with the sponsorship of interested pharmaceutical companies.