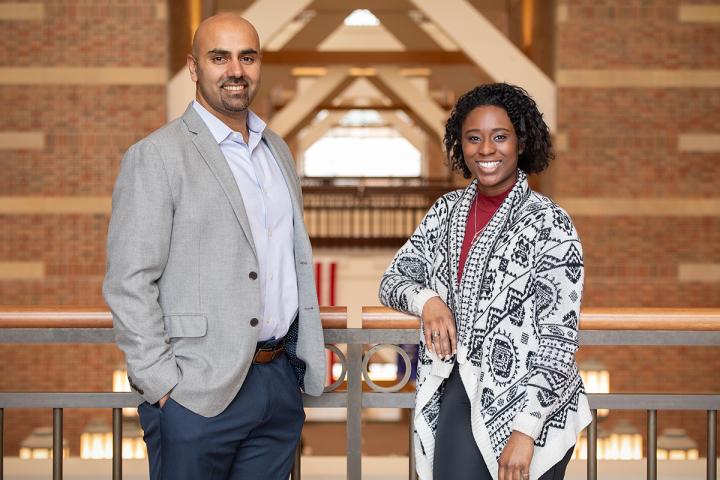 CHAMPAIGN, Ill. — Researchers report that 4-6-year-old children who walk further than their peers during a timed test – a method used to estimate cardiorespiratory health – also do better on cognitive tests and other measures of brain function. Published in the Journal of Clinical Medicine, the study suggests that the link between cardiorespiratory fitness and cognitive health is evident even earlier in life than previously appreciated.

Most studies of the link between fitness and brain health focus on adults or preadolescent or adolescent children, said doctoral student Shelby Keye, who led the new research with Naiman Khan, a professor of kinesiology and community health at the University of Illinois Urbana-Champaign. Such research has consistently found positive correlations between people’s aerobic exercise capacity and their academic achievement and cognitive abilities, she said. Studies have found that higher cardiorespiratory fitness in older children and adults corresponds to the relative size and connectivity of brain structures that are important to cognitive control.

“But it isn’t yet known at what point in the developmental trajectory of childhood this relationship emerges,” Keye said.

“This is worrisome, since brain development of core cognitive control processes begins in early childhood and continues well into early adulthood,” Khan said. And yet, studies of this age group are limited, he said.

To better understand the relationship between cardiorespiratory fitness and brain health in 59 preschool-aged children, the researchers subjected them to several tests. The children walked as far as they could in six minutes, a test that allowed researchers to estimate their cardiorespiratory fitness. An early cognitive and academic development test gave the team a measure of each child’s intellectual abilities, and a computerized “flanker” task measured how well they were able to focus on the important part of an image while ignoring distracting information. Participants also took part in a computerized task that required them to alter their responses depending on whether flowers or hearts appeared on the screen – a measure of mental flexibility.

A subset of 33 children also engaged in an auditory task that required them to respond to certain sounds and not others while wearing an EEG cap. The EEG measured electrical activity during the cognitive control task.

“The EEG offers a noninvasive way to measure children’s ability to pay attention despite distractions and process information in real time as they complete tasks,” Keye said.

Statistical analyses revealed a relationship between the children’s physical fitness and their cognitive abilities and brain function, the researchers said.

“Preschool children with higher estimated cardiorespiratory fitness had higher scores on academic ability tasks related to general intellectual abilities as well as their use of expressive language,” Keye said. “They had better performance on computerized tasks requiring attention and multitasking skills, and they showed the potential for faster processing speeds and greater resource allocation in the brain when completing these computerized tasks.”

The study does not prove that cardiorespiratory fitness enhances cognitive abilities in young children but adds to a growing body of evidence that the two are closely linked – even in children as young as four years old, the researchers said.

This research was funded by the National Dairy Council, with partial funding provided by the department of kinesiology and community health and the Graduate College Fellowship at the U. of I.

The paper “Six-minute walking test performance relates to neurocognitive abilities in preschoolers” is available online and from the U. of I. News Bureau.