Students’ identities can play a key role in how comfortable they feel and how often they speak up in the classroom, especially in STEM fields. For instance, women generally speak far less than men in undergraduate engineering classes, but this is not always the case, according to Princeton researchers. When classes are taught by women instructors, the gender gap practically disappears. 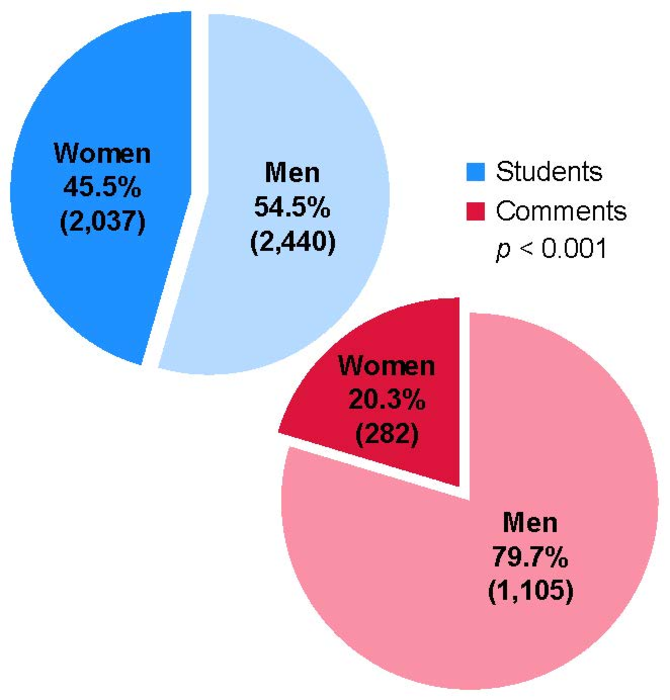 Students’ identities can play a key role in how comfortable they feel and how often they speak up in the classroom, especially in STEM fields. For instance, women generally speak far less than men in undergraduate engineering classes, but this is not always the case, according to Princeton researchers. When classes are taught by women instructors, the gender gap practically disappears.

Another major factor in women’s class participation is participation by other women — the researchers found that women are much more likely to speak after another woman has spoken in class.

“That was one of the findings that I was most excited about, because it felt like something that could really be leveraged to change teaching practices,” said study coauthor Nikita Dutta, who completed a Ph.D. in mechanical and aerospace engineering at Princeton in 2021 and is now a Director’s Postdoctoral Fellow at the National Renewable Energy Laboratory. “It’s kind of like a waterfall effect once one woman starts to participate.”

While much progress has been made in recent decades, women remain significantly underrepresented in engineering and other STEM fields. In 2018, women earned 22.2% of engineering bachelor’s degrees in the United States. (Princeton Engineering’s current undergraduate population is 41% women.) Previous work has shown that experiences with mentors, peer groups and classroom climates play critical roles in undergraduate women’s success in engineering.

The study, published online March 1 in IEEE Transactions on Education, included observations of 1,387 student comments over 89 class periods in 10 different courses in Princeton’s engineering school. Five of the courses were taught by women and five were taught by men, although only 30 of the observed class periods were taught by women. While the students observed in the courses were 45.5% women and 54.5% men, only 20.3% of the classroom comments came from women. (The study setup did not allow for students to self-identify their gender; the observers noted the perceived gender of each student as “man,” “woman” or “non-binary.”)

Investigating the timing of students’ comments, the researchers found that after one woman participated in class, during the next minute the proportion of comments by women rose to 32.4% — an effect that decayed over time but lasted for nine minutes after the initial comment.

Dutta conducted her dissertation research with Craig Arnold, the Susan Dod Brown Professor of Mechanical and Aerospace Engineering and director of the Princeton Institute for the Science and Technology of Materials. In fall 2018, she also served as an assistant in instruction for Arnold’s course, “Structure and Properties of Materials.”

During lectures, she noticed that women seemed to answer questions and offer comments less often than men; she started tracking students’ participation informally, and found variability from one class session to the next. She became curious about what might be behind these fluctuations, and whether other engineering courses might reveal larger trends. At the semester’s end, Dutta presented her findings to Arnold and the rest of his research group during their weekly meeting.

“My jaw dropped. I thought, ‘This is remarkable; this is incredible.’ She started talking about her plans … and ultimately it turned into a real scientific study,” said Arnold, who coauthored the paper with Dutta.

Dutta and Arnold submitted a proposal to Princeton’s Institutional Review Board, which oversees research on human subjects. They also consulted with pedagogy and educational assessment experts at Princeton’s McGraw Center for Teaching and Learning, where Dutta had been trained as a graduate teaching fellow.

During the next two semesters, they enlisted other graduate students to assist with observations in lecture courses representing different class sizes and levels. Although the study was curtailed by the COVID-19 pandemic, they were able to gather sufficient data to draw some meaningful conclusions.

Besides recording student commenters’ genders, observers labeled comments as “unprompted,” “solicited” or “involuntary.” The gender gaps in unprompted and solicited participation were similar to the overall gender gap. The number of involuntary comments was small, since only three of the 10 instructors called on students who had not raised a hand, but the observations suggest that instructors called on men and women equally.

Observers also classified comments as “concept questions,” “clarifiers,” “answers” or “general comments” unrelated to course content. Women participated more frequently after another woman’s comment, regardless of comment type, which points to icebreaker questions as a strategy that instructors can employ to promote participation and refresh students’ attention.

“I think the fact that the conversational comments still had the effect of increasing participation by women is a really empowering result, because it means that you can solicit less intimidating forms of participation,” said Dutta. “For instance, in a materials class, you can ask students where they have observed these kinds of properties in real life. That is a technique that some professors are already using, but I think this shows how it can be helpful not just for encouraging more participation, but for encouraging more equitable participation.”

The researchers also noted that involving more women as co-instructors, guest lecturers and teaching assistants could help close the participation gender gap by tapping into the effect seen in courses taught by women. It could be especially useful to draw on early-career researchers as instructors and role models, given the long timespan of changing gender representation among university faculty.

For women and students from other underrepresented groups in STEM fields, decades of research have shown the importance of “feeling like they’re part of that community, that they can be part of the conversation and speak in a group setting, get clarity or answer a question with confidence,” said Kelly Godfrey, assistant director of educational and program assessment at the McGraw Center, who advised on the research. “Being part of the community is the end goal, and this is one of the ways that we can clear that path.”

“The challenges of inclusive teaching often seem so big: How are we going to fight systematic oppression and hundreds of years of patterns; how can we make a difference in that?” said Sarah Schwarz, senior associate director for graduate pedagogy at the McGraw Center. “I think there’s often really compelling small touches that make a difference in creating classrooms that are more inclusive, and this is one of many powerful examples of that.”

Dutta and Arnold said they hope educators at Princeton and other institutions will implement some of the strategies they suggest, as well as expand on this initial study by examining participation patterns in a broader range of students and courses, including the participation of students from other underrepresented groups.

“The results we found are just the beginning — there is much more learn,” said Arnold. “I hope this paper gets people thinking about some of the small things you can do in the classroom that can make a big difference.”