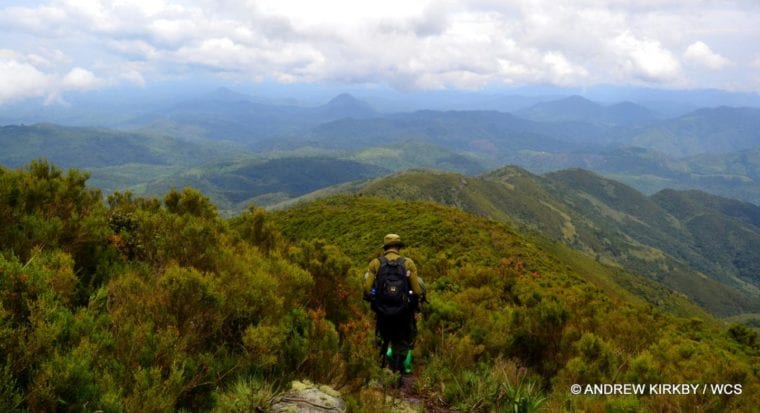 A new study by WCS looks at the job satisfaction of front line conservation rangers working in challenging conditions at a national park in the eastern Democratic Republic of the Congo (DRC) and identifies ways to improve motivation to make them more effective at enforcing the law.

Very little research has been conducted into the wellbeing of the rangers and staff who work in the field of conservation, how motivated they are and what this might mean for the conservation work they do. Rangers who are not motivated to do their job won’t be effective at protecting wildlife in the parks where they work. This study was a unique opportunity to give park rangers in this part of the world a voice through one-on-one interviews to express what they liked and disliked about their job, and what affected their motivation. Kahuzi-Biega National Park, located in eastern DRC, was chosen as a case study to assess these aspects of the rangers’ lives.

The new study appears today in the journal Oryx. The authors are: Charlotte Spira and Andrew Kirkby of WCS, and Andrew Plumptre, formerly with WCS and now with Birdlife International.

“We found that park rangers often started out optimistic and motivated, but as time passed their motivation and job satisfaction decreased” said WCS researcher Charlotte Spira, the lead author of the study. “However, there are a number of ways that this can be improved. In order to keep park rangers motivated and satisfied, managers need to provide rangers with a salary that reflects the cost of living and the risks associated with the job, have more regular occurrences and opportunities to promote rangers, provide internal and external recognition for their work, positive performance incentives, and improved living conditions in remote patrol posts. Without a guarantee of security, rangers are unmotivated to conduct patrols and are less able to do their job effectively, which include protecting highly endangered species such as the Grauer’s gorilla that can only be found in this part of the world.”

Meanwhile the context in eastern DRC continues to be extremely challenging. This region has a huge quantity of weapons in circulation left from the civil war that broke out in 1996, as well as ongoing conflict involving the multitude of armed groups that are active in the region (many within national parks). Rangers need to be adequately equipped and trained with which to deal with these situations effectively and responsibly. The rangers’ day-to-day patrol duties in national parks often lead to life threatening situations during encounters with armed militias who are exploiting natural resources illegally. Furthermore, wildlife offenders who are arrested and transferred to local courts are often freed after a short period of time, and sometimes retaliate against the rangers involved in their arrest.

“The country’s judicial system needs to be improved to ensure offenders serve the time they are sentenced and get punished if they retaliate against rangers” said Richard Tshombe, Director for WCS’s Democratic Republic of Congo Program. “Specific legal measures and clear directives also need to be put in place that recognize the dangers rangers face in their day to day jobs and support them in acting responsibly during armed confrontations’.

This work was supported by the U.S. Agency for International Development.

Just how much does enhancing photosynthesis improve crop yield?

Scienmag Apr 8, 2019
Credit: ARC Centre of Excellence for Translational Photosynthesis In the next two decades, crop yields need to…