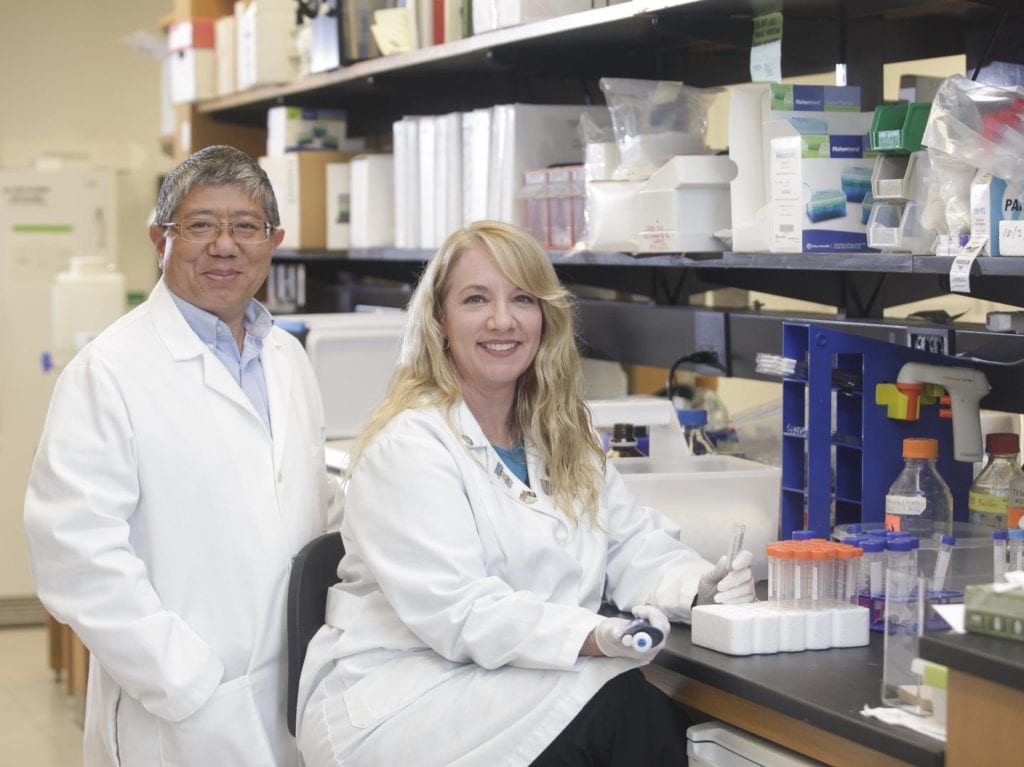 AUGUSTA, Ga. (Jan. 3, 2019) – Scientists are narrowing in on checklists of both errant genes and the environmental factors that could trigger those genes to more accurately assess type 1 diabetes risk and help children and their families avoid it.

“The next five years is the time to put the puzzle together,” says Dr. Jin-Xiong She, director of the Center for Biotechnology and Genomic Medicine at the Medical College of Georgia at Augusta University and Georgia Research Alliance Eminent Scholar in Genomic Medicine.

She is talking about the TEDDY – The Environmental Determinants of Diabetes in the Young – study that started in 2003 at MCG and five other clinical centers across four countries and is following nearly 9,000 children and their families. She is principal investigator for studies in Georgia and Florida. TEDDY also has clinical centers in Colorado, Washington, Finland, Sweden and Germany.

“This will enable us to continue working with families, collecting and analyzing samples and data, for the next five years,” says She, who recently received a $3 million grant from the National Institutes of Health to continue his part of the studies in two of the most populous and fastest-growing states in the nation.

He’s optimistic that the unprecedented, prospective study documenting how genes and environment collide to cause a condition that typically surfaces in youth and destroys the insulin-producing beta cells in the pancreas, will enable prevention of the condition that affects about 1 in 300 by age 18, according to the NIH.

Today there is no proven way to prevent type 1 diabetes, which hits at the heart of what TEDDY is about, She says.

Two peak ages ranges for type 1 diabetes are 2-4 and 12-15 and since TEDDY began, parents have been keeping exhaustive diaries on everything from a well-baby visit to the doctor to vaccinations to over-the-counter drugs the children take. They also collect nail, stool and blood samples throughout the 15-years each child is being followed. Scientists have been analyzing it all, including the water children drink, which can vary from one metropolis to the next. The international scope of the study is enabling identification of even regional differences that may be factors in disease development.

The massive data that continues to be generated by some 9,000 TEDDY families is yielding previously unknown high-risk genes and environmental factors that will ultimately lead to those genetic and environmental checklists.

“How to predict risk is an important question, but the main question of TEDDY is what can we do about that risk?” She says. Ideally that will mean keeping the immune system of high-risk children from ever making autoantibodies against their insulin producing cells. That means screening should start early, probably within the first year of life, She says, possibly even as one of the blood tests done for newborns.

The Georgia-Florida TEDDY contingent She leads includes about 600 children. To date 22 children have developed type 1 diabetes and another 58 are autoantibody positive. He suspects by the end of the next five years, about half those children will also have the disease.

Autoantibodies are evidence that the child’s immune system has started to target the child’s insulin producing cells. It’s the attack and eventual destruction of the beta cells by the immune system that leave children dependent on insulin therapy the rest of their lives.

To date about 12 percent of TEDDY children had autoantibodies by age 10 and nearly 8 percent have multiple antibodies.

They suspect over the next five years as children age and more develop autoantibodies and/or disease, they’ll find the triggering environmental factors will change as well, another reason investigators says five more years of monitoring is important.

Technological advances that have occurred over the life of TEDDY also now mean they can monitor advancement from a single to multiple autoantibodies to full-blown disease. Parallel environmental exposures over that timeframe already are providing more insight into causes and logical points for intervention.

To first enroll study participants, TEDDY screened for two known high-risk genes out of the handful of genes known at that time. Children with those genes – and no first-degree relative with the disease – have about a 3 percent disease risk, 10 times higher than children without those genes. Those with the genes and a first- degree relative with type 1 have about a 14 percent chance of developing type 1 diabetes. Identifying more high-risk genes should significantly improve the ability to identify risk, She says.

TEDDY has helped identify multiple additional high-risk genes with more to come, he says, and future screens will likely look at a few hundred genes.

“We are working on a new test that may analyze hundreds of genes that we think will be more accurate, more predictive,” She says.

Environmental factors include dietary triggers, so the scientists are now following up on observations already made in TEDDY like the fact that adequate vitamin D levels are associated with lower risk of type 1 diabetes particularly in children with even one minor genetic variation on their vitamin D receptor gene. They’ve also found that exposure to probiotics in infancy decreases diabetes development risk in the highest risk children while consuming hydrolyzed infant formula – which is considered hypoallergenic and good for infants who can’t digest cow milk – increases risk.

They also are looking further at the psychosocial impact of the study itself as well as the disease on parents and children. TEDDY families experiencing maladjustments are offered counseling and the investigators already have noted issues such as: increased parent anxiety when an autoantibody is detected; parents who still underestimate the full impact of the disease; and parents who pursue unproven methods to prevent type 1 diabetes development.

Now that at-risk children are older, they can also talk with them about the emotional and behavioral impact, and look for signs of stress like presence of the stress hormone cortisol in their toenail clippings.

They also are generating data on the physical activity of the TEDDY participants and keeping measures of their body composition to explore how they might affect risk of developing autoantibodies and progression to type 1 diabetes.

While weight and inactivity are considered major risk factors for type 2 diabetes, “How much it contributes to type 1, we don’t know,” says She. “That is why we are looking, and in the next five years, we will be able to give you an answer.”

She and TEDDY research manager Diane Hopkins regularly laud the TEDDY families for their extraordinary commitment to the long, extensive study and recently hosted a party for about 300 TEDDY families from the two-state area they manage. Attrition has been low and some families even came back after dropping out, She notes.

Type 1 diabetes can affect the entire body, cause heart and blood vessel disease, kidney, eye and foot damage and nerve damage. It generally reduces life expectancy by about a decade.

Extraordinary treefrog discovered in the Andes of Ecuador

Can a video game-based 'digital medicine' help children with autism and co-occurring ADHD?

A secret in saliva: Food and germs helped humans evolve into unique…

Cellular aging is linked to structural changes in the brain