A study by a University of Texas at Dallas researcher published Sept. 17 in the journal Science Advances identifies a pattern of racial attention deficit, shedding light on why diversity efforts in organizations often fail. It also suggests a remedy: When white workers can witness the accomplishments of Black peers — rather than being told about them — the attentional gap subsides. 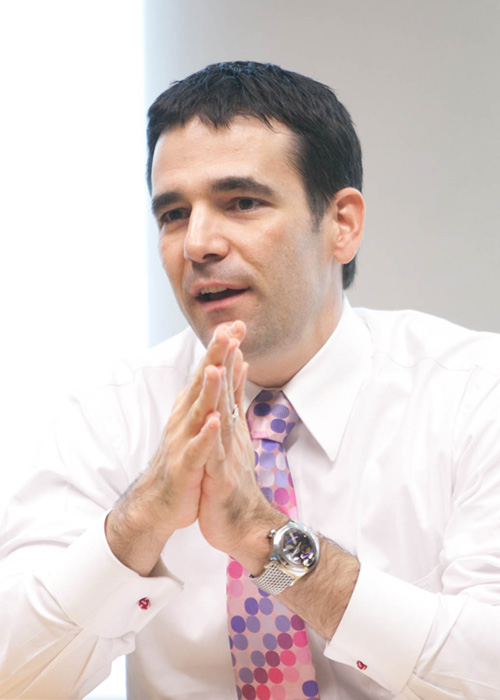 A study by a University of Texas at Dallas researcher published Sept. 17 in the journal Science Advances identifies a pattern of racial attention deficit, shedding light on why diversity efforts in organizations often fail. It also suggests a remedy: When white workers can witness the accomplishments of Black peers — rather than being told about them — the attentional gap subsides.

Dr. Sheen S. Levine, assistant professor of organizations, strategy and international management in the Naveen Jindal School of Management and the study’s lead author, said the findings evince a racial attention deficit: Even when in their best interest, white Americans pay less attention to Black peers.

In a multiyear experiment designed to understand how people pay attention to peers of different races, the researchers gathered over 2,500 white working-age Americans, men and women, who were presented with a difficult problem. The participants could observe how peers solved the same problem.

“Diversity has been advanced as a booster of performance because it allows learning from different skills and perspectives,” said Levine, who studies how human behavior affects other people, organizations and markets. “But do these learning opportunities materialize? Or perhaps discrimination has taken a more subtle form, interfering with the attention given to minorities?”

Levine said the results of the study suggest that white Americans are prone to making poor decisions when they ignore their Black peers, and that, even when in their self-interest, they tend to pay less attention to Black peers.

“We find that white decision-makers are more likely to disregard information emanating from Black peers, even if objectively essential,” Levine said. “By failing to recognize the perspective of someone from a different race and clinging to their observational viewpoint alone, they miss opportunities to learn, thus undermining their own performance.”

Study participants, who were between 18 and 65 years old, were tasked with solving a puzzle that would earn them cash if they solved it correctly. The puzzle was difficult, containing ambiguous and seemingly contradictory information, as real-world tasks often do.

Each participant was matched with two peers who bore more typically Black or white names and solved the same puzzle. Participants could only solve it accurately if they noticed the peers’ choices and incorporated the information into their decision-making. Whether the participants paid attention to their peers was evident from their choices. Participants who failed to notice others’ solutions made poor decisions.

The researchers concluded that if people allocate their attention along racial lines, they will be less likely to learn from those of a different race.

“Organizations can encourage — or mandate — the hiring of minorities, but this merely lets them through the door and does not guarantee a seat at the table. We find that, even when in their self-interest, white Americans overlook Black peers,” Levine said.

When they were given information about their Black peers’ prior accomplishments, participants rated the peers as equally skillful — but remained hesitant to learn from their choices. “When participants received the test scores of the peers, they no longer viewed Black peers as less competent, but amazingly they were still likely to overlook the advice of the Black peers, compared to white peers,” Levine said.

However, in a second intervention, called experiential recognition, researchers did not give information about credentials. They just let participants repeatedly solve problems and observe how their peers solved the same problems.

When white participants could witness the ongoing accomplishments of Black peers, rather than being told about them, the racial attention deficit subsided, the researchers found.

Levine said if biased choices are made because of a racial attention deficit, it is easier to understand the ineffectual outcomes of initiatives to reduce prejudice.

“However well intended, these cures may be treating the wrong disease. Our results show that diversity is not enough. Neither is the common strategy of mentioning the credentials of Black peers,” he said. “What does lead to a real change in perceptions and behavior is experiencing the ongoing accomplishments of peers by witnessing them. It may not be a quick or easy treatment, but it could be one that can bring inclusion without the cynicism and backlashes sometimes triggered by efforts to promote equal treatment.”

Levine said the study’s findings also provide crucial lessons for those in science — from grantors to principal investigators and university administrators — and in organizational affairs, including businesses, nonprofits and government agencies.

“Our study suggests that achieving the full benefits of racial diversity requires policies and practices of inclusion,” he said. “As part of such a strategy, our findings point to inclusive recognition as a critical component of organizational life. Also, by mitigating the attention deficit, recognition enhances problem-solving. Thus, more attention can improve everyone’s performance. If you want to do right and do better, pay attention to who’s paying attention to whom.”

Co-authors of the study include Dr. Charlotte Reypens, a former visiting scholar at UT Dallas who is now a policy advisor for the British government, and Dr. David Stark, a professor of sociology at Columbia University.

“The authors of this paper have made a significant contribution to the social sciences by demonstrating behaviorally how and how much whites ignore, overlook and underestimate Blacks,” said Dr. Michele Lamont, professor of sociology and of African and African American Studies and the Robert I. Goldman Professor of European Studies at Harvard University. “Their study of ‘recognition gaps’ explores new paths in our understanding of how inequality operates, which has everything to do with how everyday judgements of worth are omnipresent and make racism so hard to combat.”

“Diversity promotes enhanced levels of performance,” said theoretical physicist Dr. Sylvester James Gates, president of the American Physical Society and a recipient of the National Medal of Science. “However, diversity only works if there is a vigorous exchange of ideas. In the paper, Racial Attention Deficit, Levine, Reypens and Stark illustrate how this communication is not occurring between colleagues of different races, to the detriment of the workplace environment.”

“This research is crucial to understanding how we as people relate to one another,” said Jonathan McBride, a partner at the consulting firm Heidrick & Struggles and former global head of inclusion and diversity at BlackRock. “This kind of evidence is vital to those of us trying to crack the code of getting people to perform better improving their experience of being at work. We all can learn more about how people can be more inclusive — or less exclusionary, even if unintentional — of one another.”

Learn more about the study and its results in this video on YouTube.