The rate of glacier ice flow is more sensitive to stress than previously calculated, according to a new study by MIT researchers that upends a decades-old equation used to describe ice flow. 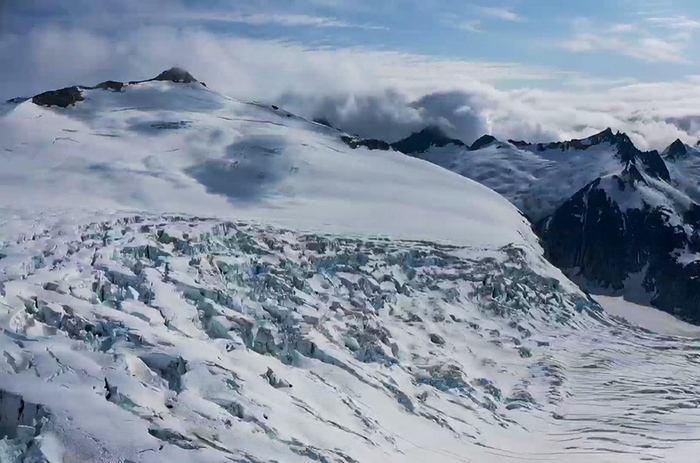 The rate of glacier ice flow is more sensitive to stress than previously calculated, according to a new study by MIT researchers that upends a decades-old equation used to describe ice flow.

Stress in this case refers to the forces acting on Antarctic glaciers, which are primarily influenced by gravity that drags the ice down toward lower elevations. Viscous glacier ice flows “really similarly to honey,” explains Joanna Millstein, a PhD student in the Glacier Dynamics and Remote Sensing Group and lead author of the study. “If you squeeze honey in the center of a piece of toast, and it piles up there before oozing outward, that’s the exact same motion that’s happening for ice.”

The revision to the equation proposed by Millstein and her colleagues should improve models for making predictions about the ice flow of glaciers. This could help glaciologists predict how Antarctic ice flow might contribute to future sea level rise, although Millstein said the equation change is unlikely to raise estimates of sea level rise beyond the maximum levels already predicted under climate change models.

“Almost all our uncertainties about sea level rise coming from Antarctica have to do with the physics of ice flow, though, so this will hopefully be a constraint on that uncertainty,” she says.

Other authors on the paper, published in Nature Communications Earth and Environment, include Brent Minchew, the Cecil and Ida Green Career Development Professor in MIT’s Department of Earth, Atmospheric, and Planetary Sciences, and Samuel Pegler, a university academic fellow at the University of Leeds.

The equation in question, called Glen’s Flow Law, is the most widely used equation to describe viscous ice flow. It was developed in 1958 by British scientist J.W. Glen, one of the few glaciologists working on the physics of ice flow in the 1950s, according to Millstein.

With relatively few scientists working in the field until recently, along with the remoteness and inaccessibility of most large glacier ice sheets, there were few attempts to calibrate Glen’s Flow Law outside the lab until recently. In the recent study, Millstein and her colleagues took advantage of a new wealth of satellite imagery over Antarctic ice shelves, the floating extensions of the continent’s ice sheet, to revise the stress exponent of the flow law.

“In 2002, this major ice shelf [Larsen B] collapsed in Antarctica, and all we have from that collapse is two satellite images that are a month apart,” she says. “Now, over that same area we can get [imagery] every six days.”

The new analysis shows that “the ice flow in the most dynamic, fastest-changing regions of Antarctica — the ice shelves, which basically hold back and hug the interior of the continental ice — is more sensitive to stress than commonly assumed,” Millstein says. She’s optimistic that the growing record of satellite data will help capture rapid changes on Antarctica in the future, providing insights into the underlying physical processes of glaciers.

But stress isn’t the only thing that affects ice flow, the researchers note. Other parts of the flow law equation represent differences in temperature, ice grain size and orientation, and impurities and water contained in the ice — all of which can alter flow velocity. Factors like temperature could be especially important in understanding how ice flow impacts sea level rise in the future, Millstein says.

Millstein and colleagues are also studying the mechanics of ice sheet collapse, which involves different physical models than those used to understand the ice flow problem. “The cracking and breaking of ice is what we’re working on now, using strain rate observations,” Millstein says.

The researchers use InSAR, radar images of the Earth’s surface collected by satellites, to observe deformations of the ice sheets that can be used to make precise measurements of strain. By observing areas of ice with high strain rates, they hope to better understand the rate at which crevasses and rifts propagate to trigger collapse.

The research was supported by the National Science Foundation.

“Ice viscosity is more sensitive to stress than commonly assumed”