A study involving scientists from the Chinese Ministry of Agriculture and Rural Affairs (MARA)-CABI Joint Laboratory (Joint Lab) has highlighted the mass rearing capabilities of a natural enemy to fight the brown marmorated stink bug pest. 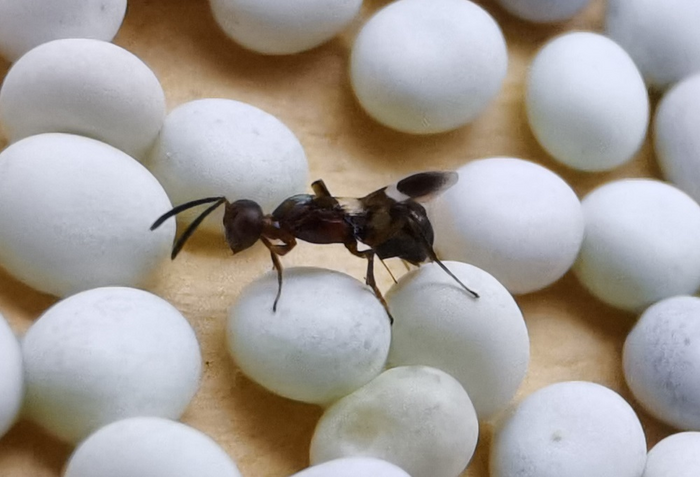 A study involving scientists from the Chinese Ministry of Agriculture and Rural Affairs (MARA)-CABI Joint Laboratory (Joint Lab) has highlighted the mass rearing capabilities of a natural enemy to fight the brown marmorated stink bug pest.

He, and colleagues from the Joint Lab as well as from the University of California,the Guangdong Academy of Agricultural Sciences, the Sun Yat-Sen University, and the Hexi University, believe that mass rearing of the wasp could achieve long-term sustainable management of the brown marmorated stink bug on important economic crops such as kiwifruit.

The brown marmorated stink bug, is a polyphagous pest native to East Asia and invasive in the United States, Canada, Europe, and Chile. It can cause significant damage to many important crops in both its native and invaded ranges.

Occasional outbreaks have been reported in kiwifruit orchards in China. Losses of approximately 30% in kiwifruit production, for example, have been reported in some orchards in Italy. In 2016, the brown marmorated stink bug caused US $60m worth of damage to Georgia’s hazelnut crop and in 2010, US $37m worth of apples were destroyed in parts of the USA.

Chemical control with broad-spectrum insecticides have been broadly used to control the brown marmorated stink bug in conventional farming systems. This is despite harm to human health and the environment.

Dr Zhang said, “Our present study is the first important step towards the successful use of A. japonicus. We assessed the reproductive attributes of A. japonicus reared on the factitious host Antheraea pernyi (Guérin-Méneville) (Lepidoptera: Anthelidae) – particularly adult longevity and both age specific and lifetime fecundity.

“We also evaluated the age-specific functional response of individual A. japonicus females to varying densities of A. pernyi, as well as their response to conspecific females (i.e., mutual interference) in terms of progeny production and progeny sex ratio.

“We found that higher lifetime fecundity, longer oviposition period and female-biased progeny production in the beginning of production not only make the rearing system of A. pernyi – A. japonicus more cost effective but also make it feasible to use A. japonicus for inundative biological control against the brown marmorated stink bug.”

In conclusion, the scientists suggest that large-scale and cost-effective A. pernyi-based mass rearing and field release testing are needed to evaluate field efficacy and non-target effects before recommending the use of mass releases of A. japonicus for control of the brown marmorated stink bug to growers.

The paper can be read in full open access here: https://onlinelibrary.wiley.com/action/showCitFormats?doi=10.1002%2Fps.7088

Reproductive attributes and functional response of Anastatus japonicus on eggs of Antheraea pernyi, a factitious host.