A study led by Simon Fraser University researchers has discovered that sufficient water flows during summer can be critical to a Chinook salmon population in the interior of British Columbia. 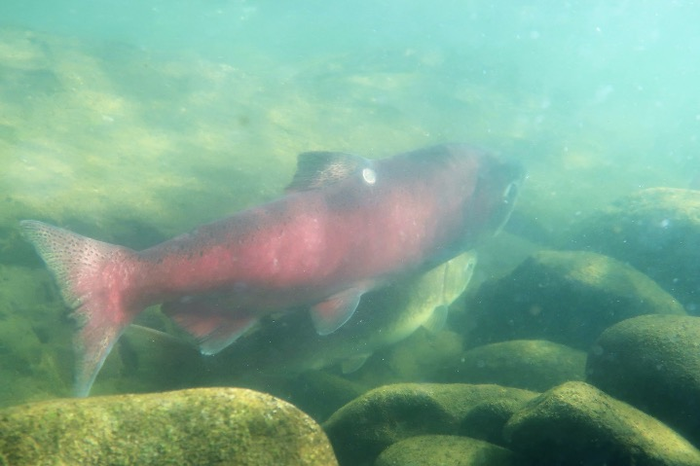 A study led by Simon Fraser University researchers has discovered that sufficient water flows during summer can be critical to a Chinook salmon population in the interior of British Columbia.

The researchers investigated how water flows in the Nicola watershed affect early summer-run Chinook salmon. The team used an advanced time-series model to understand 22 years of variation in Chinook salmon productivity. After accounting for ocean survival and density dependence, they discovered that the flow during August, when Chinook are rearing as juveniles, was the most important predictor of productivity. Higher August flows during adult spawning and migration also likely boost productivity, while lower flows during this time are linked to decline.

The results could help to inform water management given watershed activities and climate change in the region. The findings are newly published in the journal Ecological Solutions and Evidence.

“We found that August flows during juvenile rearing had the greatest impact on Chinook productivity out of any factor; the effect was very large,” says the study’s lead author, Luke Warkentin, who carried out the project as part of his masters research in SFU’s Salmon Watersheds Lab, in collaboration with scientists from Fisheries and Oceans Canada. “If there isn’t enough water during the summer, Chinook populations tend to decline.” On average, cohorts that experienced 50 per cent below average flows in the August of spawning and rearing had 29 per cent lower productivity.

Over the past 100 years, Nicola River flows in August have decreased by 26 per cent, on average, based on analyses of long-term flow data.

“These long-term changes are probably the cumulative effect of climate change, water withdrawals for agricultural and other uses, and land use such as forestry,” says SFU biological sciences professor Jonathan Moore, the paper’s co-author.

Managing flows for people and fish

Water flows in rivers are controlled by many different human activities, such as water withdrawals for agriculture, dam operations, and forestry, as well as climate variability. The seasonal patterns of water flow can impact the survival and productivity of fishes. Yet, it can be difficult to know how much water particular rivers need in order to sustain or recover fish and their fisheries. The findings from this study can help guide management of environmental flows in systems with multiple demands on water systems, such as the Nicola River, and elsewhere.

In 2021, this region of B.C. suffered catastrophic floods and a heat dome that broke records and caused substantial harm to people and property.

“This data is helping to inform ongoing watershed planning and on-the-ground action in the Nicola by the five Nicola Bands and the Province,” says Leona Antoine who helps lead the Nicola Watershed Governance Project, and is associated with the Scw’exmx Tribal Council, not involved in the study. “Science such as this, as well as traditional knowledge and other sources of expertise, are guiding real change on the ground to steward this watershed.”