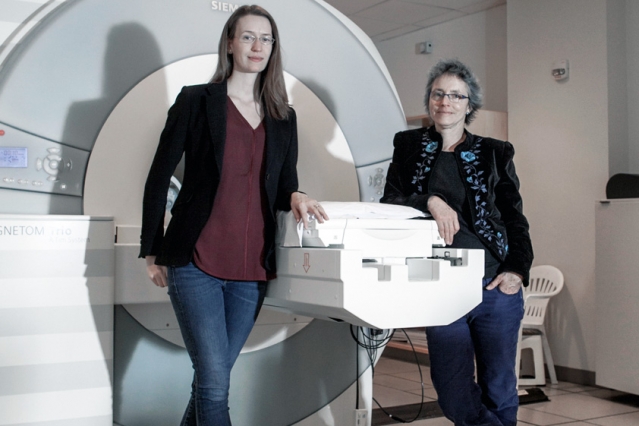 MIT and Harvard University neuroscientists have found a link between a behavioral symptom of autism and reduced activity of a neurotransmitter whose job is to dampen neuron excitation. The findings suggest that drugs that boost the action of this neurotransmitter, known as GABA, may improve some of the symptoms of autism, the researchers say.

Brain activity is controlled by a constant interplay of inhibition and excitation, which is mediated by different neurotransmitters. GABA is one of the most important inhibitory neurotransmitters, and studies of animals with autism-like symptoms have found reduced GABA activity in the brain. However, until now, there has been no direct evidence for such a link in humans.

“This is the first connection in humans between a neurotransmitter in the brain and an autistic behavioral symptom,” says Caroline Robertson, a postdoc at MIT’s McGovern Institute for Brain Research and a junior fellow of the Harvard Society of Fellows. “It’s possible that increasing GABA would help to ameliorate some of the symptoms of autism, but more work needs to be done.”

Robertson is the lead author of the study, which appears in the Dec. 17 online edition of Current Biology. The paper’s senior author is Nancy Kanwisher, the Walter A. Rosenblith Professor of Brain and Cognitive Sciences and a member of the McGovern Institute. Eva-Maria Ratai, an assistant professor of radiology at Massachusetts General Hospital, also contributed to the research.

Many symptoms of autism arise from hypersensitivity to sensory input. For example, children with autism are often very sensitive to things that wouldn’t bother other children as much, such as someone talking elsewhere in the room, or a scratchy sweater. Scientists have speculated that reduced brain inhibition might underlie this hypersensitivity by making it harder to tune out distracting sensations.

In this study, the researchers explored a visual task known as binocular rivalry, which requires brain inhibition and has been shown to be more difficult for people with autism. During the task, researchers show each participant two different images, one to each eye. To see the images, the brain must switch back and forth between input from the right and left eyes.

For the participant, it looks as though the two images are fading in and out, as input from each eye takes its turn inhibiting the input coming in from the other eye.

“Everybody has a different rate at which the brain naturally oscillates between these two images, and that rate is thought to map onto the strength of the inhibitory circuitry between these two populations of cells,” Robertson says.

Performance on this task was also linked to patients’ scores on a clinical evaluation of communication and social interaction used to diagnose autism: Worse symptoms correlated with weaker inhibition during the visual task.

The researchers then measured GABA activity using a technique known as magnetic resonance spectroscopy, as autistic and typical subjects performed the binocular rivalry task. In nonautistic participants, higher levels of GABA correlated with a better ability to suppress the nondominant image. But in autistic subjects, there was no relationship between performance and GABA levels. This suggests that GABA is present in the brain but is not performing its usual function in autistic individuals, Robertson says.

“GABA is not reduced in the autistic brain, but the action of this inhibitory pathway is reduced,” she says. “The next step is figuring out which part of the pathway is disrupted.”

“This is a really great piece of work,” says Richard Edden, an associate professor of radiology at the Johns Hopkins University School of Medicine. “The role of inhibitory dysfunction in autism is strongly debated, with different camps arguing for elevated and reduced inhibition. This kind of study, which seeks to relate measures of inhibition directly to quantitative measures of function, is what we really to need to tease things out.”

In addition to offering a possible new drug target, the new finding may also help researchers develop better diagnostic tools for autism, which is now diagnosed by evaluating children’s social interactions. To that end, Robertson is investigating the possibility of using EEG scans to measure brain responses during the binocular rivalry task.

“If autism does trace back on some level to circuitry differences that affect the visual cortex, you can measure those things in a kid who’s even nonverbal, as long as he can see,” she says. “We’d like it to move toward being useful for early diagnostic screenings.”