CHAMPAIGN, Ill. — A study of a herpes virus that infects chickens offers new insights into potentially problematic interactions between vaccines made from live viruses and the viruses they are meant to thwart. 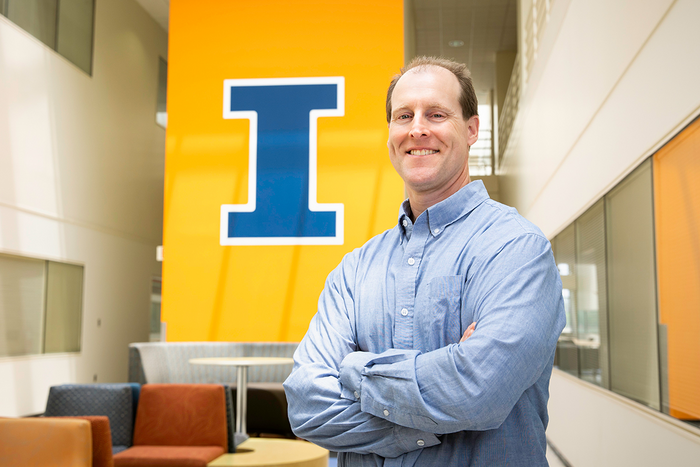 CHAMPAIGN, Ill. — A study of a herpes virus that infects chickens offers new insights into potentially problematic interactions between vaccines made from live viruses and the viruses they are meant to thwart.

Reported in the journal Virulence, the study offers direct evidence that a vaccine and virus can infect the same cells in living animals and share molecular tools that allow the virus to infect other animals – in this case, chickens.

The study focused on Marek’s disease, a viral infection that spreads when one chicken inhales fragments of dead skin or feather tissue from an infected chicken.

“We’ve been trying to understand how the virus spreads from one host to another,” said University of Illinois Urbana-Champaign pathobiology professor Keith Jarosinski, who led the research. “We’re not only doing it for the benefit of the chickens in the poultry industry, but also because it’s a very similar mechanism that the virus that causes chickenpox uses, where it enters through the respiratory route and infects the lymphocytes, and that gets it to the skin.”

The poultry industry has a practice of vaccinating newly hatched chickens against the Marek’s disease virus, Gallid alphaherpesvirus 2. Some even vaccinate chicks in the egg, Jarosinski said. The use of live vaccines that have been modified so that they’re not infectious is the most effective strategy for controlling symptoms of the disease, which include failure to thrive, tumors and death.

Vaccines made from live viruses do a better job than other vaccines in training the immune system to recognize Marek’s disease virus, but these vaccines do not lead to eradication of the virus, Jarosinski said. This leaves room for the natural virus and the modified viral vaccines to interact in ways that may promote viral evolution or infectiousness.

Previous studies have shown that viruses can pick up genes from the vaccines designed to fight them, allowing the viruses to evolve in ways that sometimes boost virulence. But no studies have demonstrated that viruses and vaccines actually infect the same cells in live animals, Jarosinski said.

Another potential interaction between viruses and vaccines involves a process known as “complementation,” where vaccines, for example, produce a molecule that the virus can use to help it become infectious or more infectious, he said.

The goals of the new study were to determine whether vaccines and natural viruses could infect the same cells in living chickens and to track whether a vaccine could supply a molecule that helps the virus spread to healthy chickens.

To do this, researchers used a combination of viruses and vaccines, some of which contained all the genes for transmission and some that were modified in ways that rendered them unable to infect new hosts. This sometimes involved deleting the gene for a protein needed to enter cells and infect the new host.

The vaccines were tagged with a red fluorescent molecule and the nontransmissible virus was tagged with green, allowing the researchers to track the course of vaccine and viral infection in cells. A combination of red and green fluorescence yields yellow light, so only cells that glowed yellow were infected with both the virus and vaccine.

The research revealed that some cells in inoculated birds contained both virus and vaccine – the first demonstration of this phenomenon in live animals, Jarosinski said.

The study also found that a Marek’s disease virus that lacked a particular molecule needed for infection – in this case a protein on the virus’s outer envelope – was able to pick up that molecule from a vaccine that had infected the same cell. This allowed the virus to infect new chickens.

“Other studies haven’t really shown that complementation between vaccines and viruses occurs except in artificial laboratory circumstances where they’re using human-specific herpes viruses in mice or pigs, for example,” Jarosinski said. “One of the unique things about this study is that we’ve looked at this process in a more natural model of infection, where we’re using a virus that is specific to chickens in chickens.”

The study should not be used to spread alarm or panic, Jarosinski said, since complementation events are less worrisome than viruses swapping genes with vaccines. But the findings should inform the design of vaccines to eliminate potential attributes that might help viruses spread.

The U.S. Department of Agriculture and the National Institutes of Health supported this research.

To reach Keith Jarosinski, email [email protected]
The paper “Coinfection in the host can result in functional complementation between live vaccines and virulent virus” is available online and from the U. of I. News Bureau.