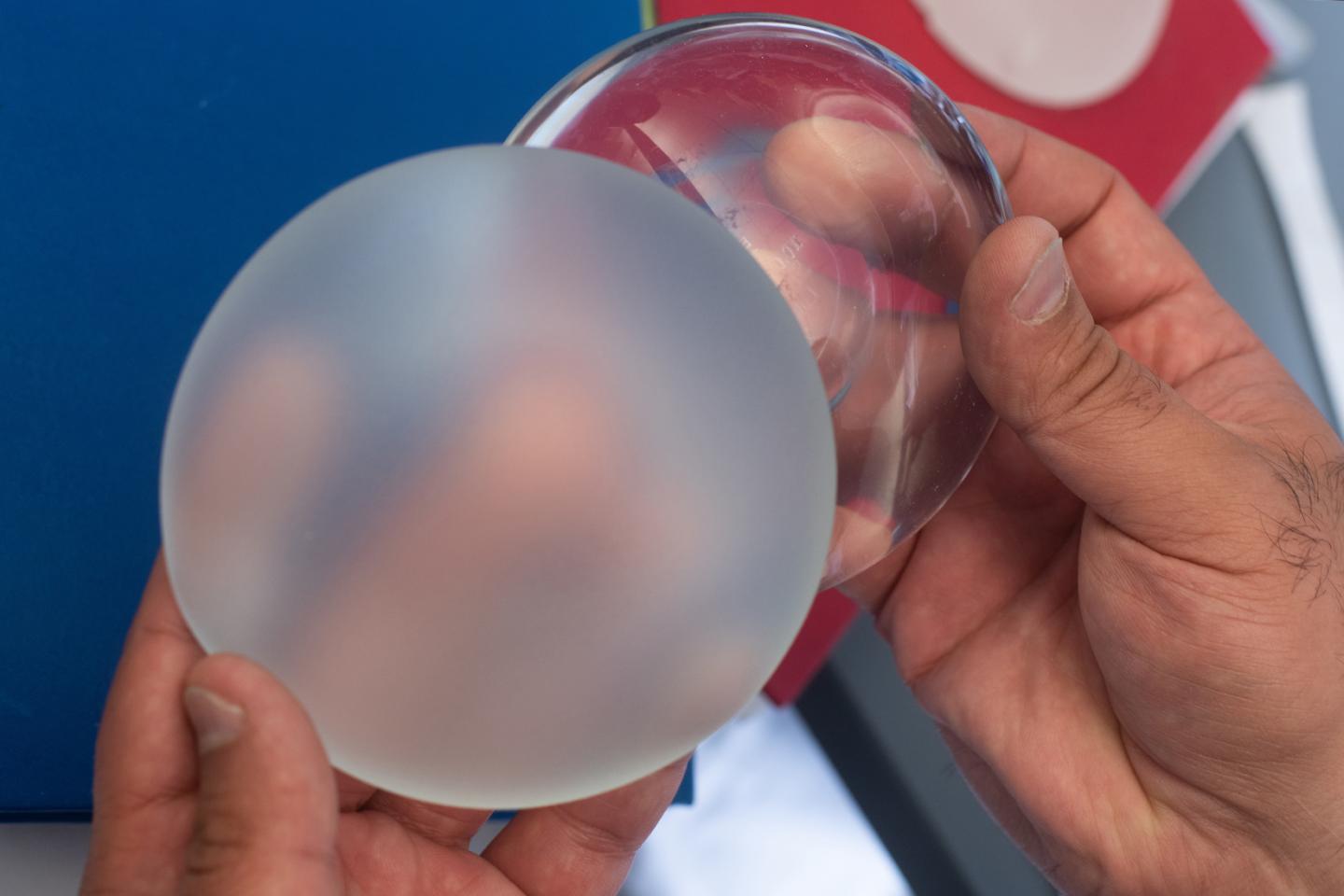 HOUSTON – (June 21, 2021) – Rice University bioengineers collaborated on a six-year study that systematically analyzed how the surface architecture of breast implants influences the development of adverse effects, including an unusual type of lymphoma.

Every year, about 400,000 people receive silicone breast implants in the United States. According to FDA data, most of those implants need to be replaced within 10 years due to the buildup of scar tissue and other complications.

A team including researchers from the Massachusetts Institute of Technology (MIT), Rice, the University of Texas MD Anderson Cancer Center and Baylor College of Medicine published its findings online today in Nature Biomedical Engineering.

“The surface topography of an implant can drastically affect how the immune response perceives it, and this has important ramifications for the [implants’] design,” said Omid Veiseh, an assistant professor of bioengineering at Rice who began the research six years ago during a postdoctoral fellowship at MIT. “We hope this paper provides a foundation for plastic surgeons to evaluate and better understand how implant choice can affect the patient experience.”

Veiseh, whose lab focuses on developing and studying biocompatible materials, said he is particularly excited about the discovery that surface architecture can be tuned to reduce host immune responses and fibrosis to breast implants.

“There’s a lot we still don’t understand about how the immune system orchestrates its response to implants, and it is really important to understand that within the context of biomaterials,” Veiseh said.

Veiseh continued the research after joining Rice’s faculty in 2017 as a CPRIT Scholar from the Cancer Prevention and Research Institute of Texas. He and two Ph.D. students from his lab, Amanda Nash and Samira Aghlara-Fotovat, collaborated on the project with the research groups of MD Anderson’s Clemens and Baylor’s Hodges to correlate findings from MIT animal studies with clinical data from human patients.

“Clinically, we have observed that patients exposed to textured-surface breast implants can develop breast implant-associated large cell lymphoma (BIA-ALCL), but this has not occurred with smooth-surface implants,” said Clemens, an associate professor of plastic surgery at MD Anderson who leads a multidisciplinary treatment team on the disease. “This paper gives important novel insights into cancer pathogenesis with clear implications for preventing disease before it develops.”

“That’s the most exciting part of this: it could lead to safer, more compatible biomaterials and implant designs,” Veiseh said.

Silicone breast implants have been in use since the 1960s. The earliest versions had smooth surfaces, but patients with these implants often experienced a complication called capsular contracture, in which scar tissue formed around the implant and squeezed it, creating pain or discomfort as well as visible deformities. Implants could also flip after implantation, requiring surgical adjustment or removal.

In the late 1980s, some companies introduced rougher surfaces intended to reduce capsular contracture rates and make implants stay in place. The textured surfaces have peaks of varying heights. The peaks of some average hundreds of microns.

In 2019, the FDA requested breast implant manufacturer Allergan recall highly textured breast implants that had an average surface roughness of about 80 microns due to risk of BIA-ALCL, a cancer of the immune system.

In 2015, Veiseh and Doloff, then postdocs in the lab of MIT’s Langer, began testing five commercially available implants with different surface designs to see how they would interact with surrounding tissue and the immune system. These included the highly textured one that had been previously recalled, one that was completely smooth and three that were somewhere in between.

In a study of rabbits, the researchers found tissue exposed to the more heavily textured implant surfaces showed signs of increased activity from macrophages — immune cells that normally clear out foreign cells and debris.

All of the implants stimulated immune cells called T cells, but in different ways. The study found implants with rougher surfaces stimulated more pro-inflammatory T cell responses. Among the non-smooth implants, those with the smallest degree of roughness (4 microns) stimulated T cells that appeared to inhibit tissue inflammation.

The findings suggest that rougher implants rub against surrounding tissue and cause more irritation. This may explain why the rougher implants can lead to lymphoma: The hypothesis is that some of the texture sloughs off and gets trapped in nearby tissue, where it provokes chronic inflammation that can eventually lead to cancer.

The researchers also tested miniaturized versions of implants in mice. They manufactured these implants using the same techniques used to manufacture human-sized versions, and showed that more highly textured implants provoked more macrophage activity, more scar tissue formation and higher levels of inflammatory T cells. The researchers worked with the Hodges’ lab at Baylor to perform single-cell RNA sequencing of immune cells from these tissues to uncover the specific signals that made the immune cells more inflammatory.

“The surface properties of the implants have profoundly different effects on key signals between immune cells that help recognize and respond to foreign materials,” said Hodges, an assistant professor of molecular and cellular biology at Baylor. “The results show that the lightly textured surface avoided the strong negative cytokine immune response induced by the rough surface.”

After their animal studies, the researchers examined how human patients respond to different types of silicone breast implants by collaborating with MD Anderson on the analysis of tissue samples from BIA-ALCL patients.

“Doing across-the-board comparisons in mice, rabbits and then in human [tissue samples] really provides a much more robust and substantial body of evidence about how these compare to one another,” Veiseh said.

The authors said they hope their datasets will help other researchers optimize the design of silicone breast implants and other types of medical silicone implants for better safety.

“We are pleased that we were able to bring new materials science approaches to better understand issues of biocompatibility in the area of breast implants,” said Langer, the study’s senior author and MIT’s David H. Koch Institute Professor. “We also hope the studies that we conducted will be broadly useful in understanding how to design safer and more effective implants of any type.”

CAPTION: Rice University bioengineers (from left) Amanda Nash, Omid Veiseh and Samira Aghlara-Fotovat and collaborators systematically analyzed how the surface roughness of silicone breast implants influenced the development of adverse effects, which in rare cases can include an unusual type of lymphoma. (Photo by Jeff Fitlow/Rice University)