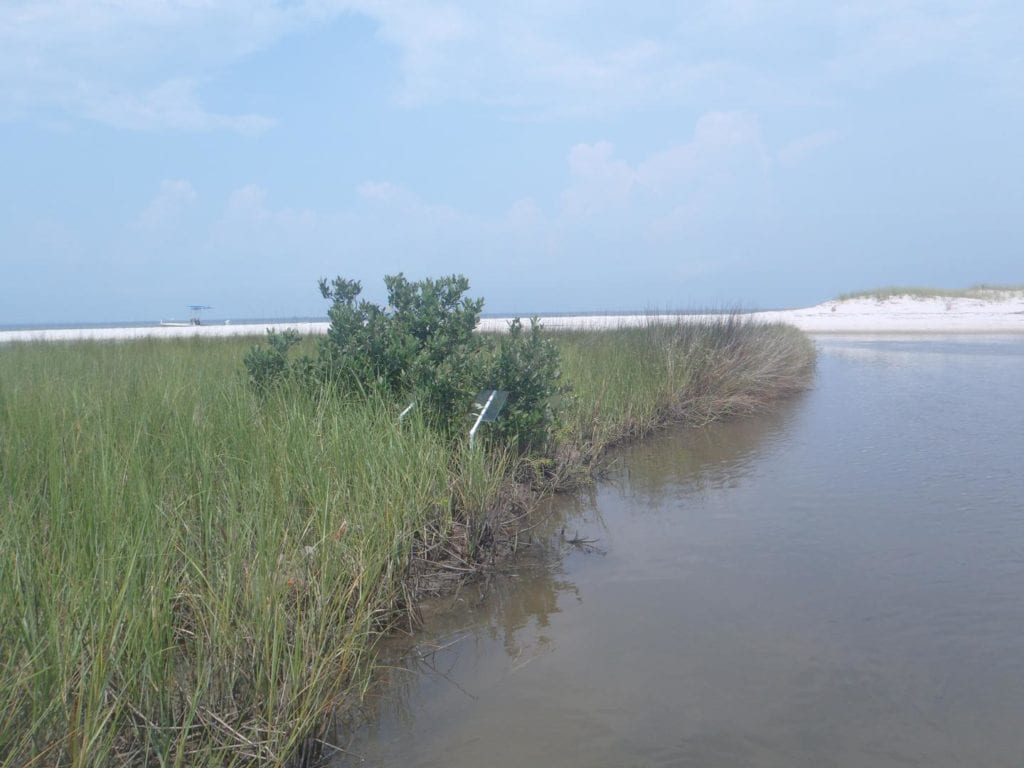 Warmer temperatures are causing more tropical species to move northward. Among these are black mangroves, whose abundance is steadily increasing in the northern Gulf of Mexico. Black mangroves grow as short trees in a dwarf forest and displace many plants common to Gulf salt marshes.

An article published this month, Tropicalization of the barrier islands of the northern Gulf of Mexico: A comparison of herbivory and decomposition rates between smooth cordgrass (Spartina alterniflora) and black mangrove (Avicennia germinans), examines how this tropical species is impacting the salt marsh food web.

In this study, researchers with the Dauphin Island Sea Lab, University of South Alabama, and the Mississippi-Alabama Sea Grant Consortium teamed up to determine the black mangroves ability to shift both grazing and decomposer trophic pathways.

To determine which leaf the grazers prefer, the team took a novel approach by studying cumulative leaf damage of black mangroves and smooth cordgrass. The research team worked off the coast of Mississippi on Horn Island from 2012 to 2013 on three sites.

The sites included sample areas with just smooth cordgrass and those with mixed vegetation. Throughout the study period, the teams took leaf samples to note grazing habits.

“Cumulative leaf damage offers a two-way perspective, for the impact to the plant and for the sustenance of the grazers,” Aaron Macy, a graduate student at the Dauphin Island Sea Lab and the University of South Alabama, explained. “Reconstructing missing leaf portions of Spartina alterniflora, commonly known as smooth cordgrass, allowed us to consider several possible grazing levels and a greater sampling effort over traditional leaf tagging methods.”

Comparing leaf composition from samples, there was a great deal more black mangrove leaf material consumed and ingested than smooth cordgrass. However, more surface area of the smooth cordgrass was removed due to the leaf tips falling off as a byproduct of grazing. The preference for the higher ingestion of black mangrove could be motivated by it’s greater nutritional value.

After the leaves fall off and reach the ground, bacteria and microbes began to decompose them, and these organisms showed a preference for black mangrove leaves.

By understanding the food preference of the salt marsh grazers, scientists can better identify and explain the changes to shifts associated with these economically and ecologically valuable systems.

Personality type could shape attitudes toward body weight of others, researchers say

Obstacles to overcome before operating fleets of drones becomes reality

If you teach them, they will care