A new study in the journal Biological Conservation has documented Nigeria’s staggering role in trafficking of wild pangolins, the anteater-like mammal whose scales are used in traditional Chinese medicines; all international commercial trade in pangolins and their parts is illegal. 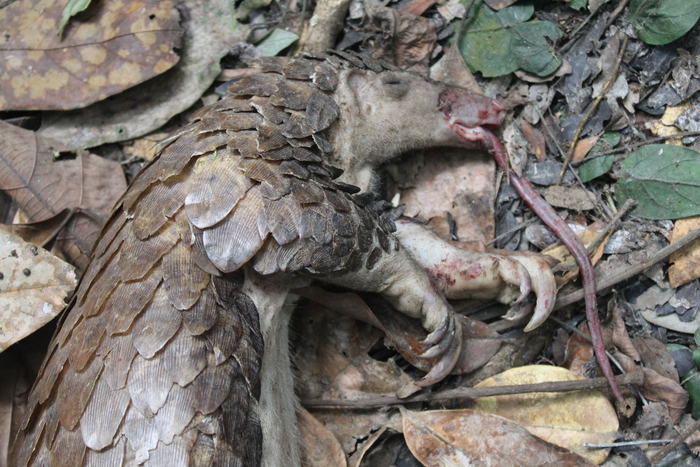 A new study in the journal Biological Conservation has documented Nigeria’s staggering role in trafficking of wild pangolins, the anteater-like mammal whose scales are used in traditional Chinese medicines; all international commercial trade in pangolins and their parts is illegal.

Scientists from Cambridge University, IUCN’s Pangolin Specialist Group, Wildlife Conservation Society (WCS) and other groups worked with Nigerian law enforcement to characterize and quantify Nigeria’s involvement in pangolin trafficking. In addition to reported seizures, they gathered data from seized pangolin scales which they reported to have been harvested from the four African pangolin species. They found that a total of 190,407 kg (418,775 pounds) of pangolin derivatives (99.9 percent scales) were trafficked between 2010 to September 2021, representing an estimated 800,000 to nearly a million animals. But as large as those numbers seem, the authors say that the actual amount of pangolins traded can be orders of magnitude higher.

Said lead author Charles Emogor of Cambridge’s Department of Zoology and a WCS Harry Schwarz Conservation Scholar: “The figures in our research suggest there may be a gross underestimation of the scale of pangolin trafficking in Nigeria and indeed Africa as a whole, which could translate into mismatched anti-trafficking policies.”

Said Andrew Dunn, director of WCS’s Nigeria Program and a co-author of the study: “We already know the global trade in pangolins is huge but for the first time this paper documents the role played by Nigeria in global pangolin trafficking.”

The Convention on International Trade in Endangered Species of Wild Fauna and Flora (CITES) has prohibited all commercial trans-national trade in pangolin specimens since 2017. However, African pangolins are continually trafficked to Asia for traditional medicine, with Nigeria considered a key hub.

According to the study, all shipments confiscated in transit were destined for Asia, with a rapid increase in the mass of maritime shipments over time. The authors found that Nigeria’s law enforcement efforts improved from 2017, the same year Nigeria apparently began playing a hub role.

Additionally, the impact of pangolin’s CITES Appendix I listing on pangolin trafficking was unclear, as the marked rise in seizures from 2017 when the listing became effective, coincided with improvements in Nigerian law enforcement efforts. However, it is apparent from the detected and reported trafficking cases that the listing of pangolins in CITES Appendix I did not stop the illegal trade, and much more needs to be done.  Importantly, the study also shows that COVID-19–induced travel restrictions likely reduced trafficking activities in 2020 which may have resumed in 2021, through creating a unique avenue for improved law enforcement efforts to intercept pangolin shipments that may have been stockpiled.

To reduce pangolin trafficking, the authors recommend the following based on the study’s findings:

The scale of Nigeria’s involvement in the trans-national illegal pangolin trade: Temporal and spatial patterns and the effectiveness of wildlife trade regulations