Study could lead to production of more efficient optoelectronic devices

Resonant-tunneling diodes are used in high-frequency oscillators, wave emitters and detectors, logic gates, photodetectors, and optoelectronic circuits. The study was a collaboration between Brazilian and German researchers. 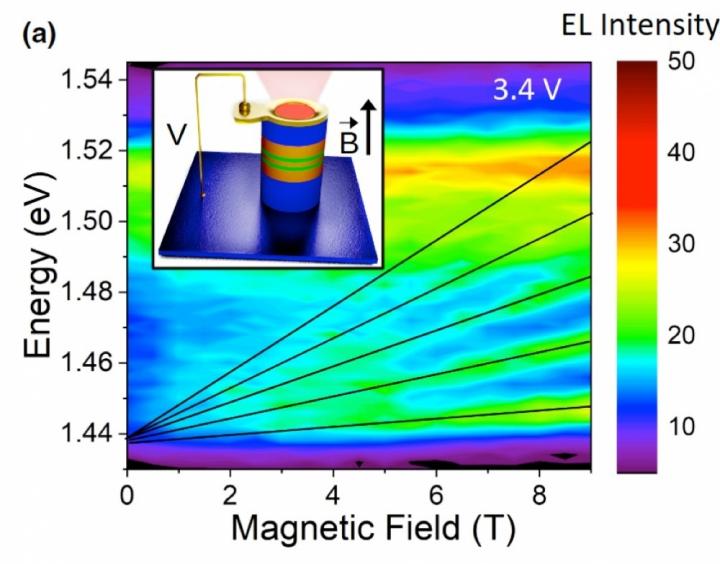 Diodes are widely used electronic devices that act as one-way switches for current. A well-known example is the LED (light-emitting diode), but there is a special class of diodes designed to make use of the phenomenon known as “quantum tunneling”. Called resonant-tunneling diodes (RTDs), they are among the fastest semiconductor devices and are used in countless practical applications, such as high-frequency oscillators in the terahertz band, wave emitters, wave detectors, and logic gates, to take only a few examples. RTDs are also sensitive to light and can be used as photodetectors or optically active elements in optoelectronic circuits.

Quantum tunneling (or the tunnel effect) is a phenomenon described by quantum mechanics in which particles are able to transition through a classically forbidden energy state. In other words, they can escape from a region surrounded by a potential barrier even if their kinetic energy is lower than the potential energy of the barrier.

“RTDs consist of two potential barriers separated by a layer that forms a quantum well. This structure is sandwiched between extremities formed by semiconductor alloys with a high concentration of electrical charges, which are accelerated when a voltage is placed across the RTD. The tunnel effect occurs when the energy in the electrical charges accelerated by application of the voltage coincides with the quantized energy level in the quantum well. As the voltage is applied, the energy of the electrons retained by the barrier increases, and at a specific level, they are able to cross the forbidden region. However, if an even higher voltage is applied, the electrons can no longer get through because their energy exceeds the quantized energy in the well,” said Marcio Daldin Teodoro, a professor in the Physics Department of the Federal University of São Carlos (UFSCar), in the state of São Paulo, Brazil.

Teodoro was the principal investigator for a study that determined charge buildup and dynamics in RTDs throughout the applied voltage range. A paper describing the study is published in Physical Review Applied. The study was supported by FAPESP via four projects (13/18719-1, 14/19142-2, 14/02112-3 and 18/01914-0).

“The operation of RTD-based devices depends on several parameters, such as charge excitation, accumulation and transport, and the relationships among these properties,” Teodoro said. “Charge carrier density in these devices has always been determined before and after the resonance area, but not in the resonance area itself, which carries the key information. We used advanced spectroscopy and electronic transport techniques to determine charge accumulation and dynamics throughout the device. The tunneling signature is a peak current followed by a sharp drop to a specific voltage that depends on the RTD’s structural characteristics.”

Previous studies measured charge carrier density as a function of voltage using the magneto-transport technique, which correlates current intensity and magnetic field. However, magneto-transport tools may not be able to characterize charge accumulation throughout the operating range, and there can be blind spots for certain voltage values. As a result, the researchers also used a technique called magneto-electroluminescence, which investigates the light emission induced by the voltage applied as a function of the magnetic field.

“Magneto-electroluminescence enabled us to study voltage bands that were magneto-transport blind spots. The results matched at points where charge density can be measured by both techniques,” said Edson Rafael Cardozo de Oliveira, first author of the paper. “These two experimental techniques proved complementary for a complete investigation of charge density across the entire RTD operating voltage range.”

Cardozo de Oliveira earned a PhD in physics with Teodoro as his thesis advisor, after a sandwich doctorate in Germany at the University of Würzburg’s Department of Technical Physics. Among his other contributions to the study was writing the software used to process the huge amount of data, on the order of gigabytes, produced by the experiments.

“The study can guide further research on RTDs, potentially leading to the production of more efficient optoelectronic devices,” he said. “By monitoring charge buildup as a function of voltage, it will be possible to develop novel RTDs with optimized charge distribution to enhance photodetection efficiency or minimize optical losses.”

Because RTDs are such complex structures, knowing how charges are distributed in them is important. “We now have a more complete map of RTD charge distribution,” said Victor Lopez Richard, a professor at UFSCar and a co-author of the paper.

The paper “Determination of carrier density and dynamics via magneto-electroluminescence spectroscopy in resonant-tunneling diodes” is at: journals.aps.org/prapplied/abstract/10.1103/PhysRevApplied.15.014042.