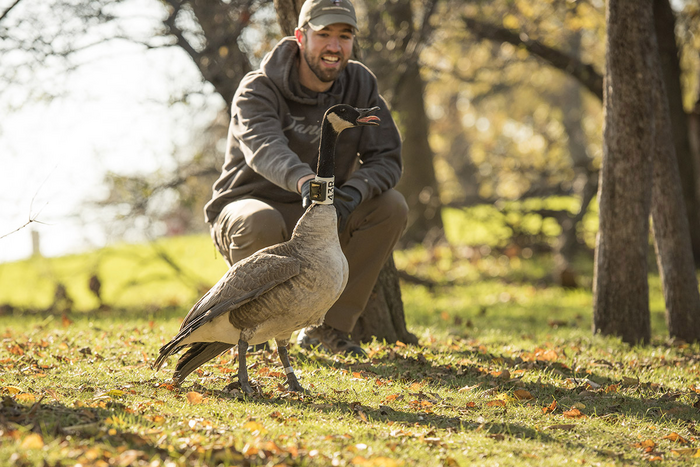 “Harassment is part of an energy equation. If a bird is hanging around Chicago in winter, it’s probably not in good shape. It’s cold and doesn’t have a lot of food,” says Mike Ward, professor in the Department of Natural Resources and Environmental Sciences (NRES) at Illinois and co-author on the study. “The goal of harassment is never to hurt the geese, but to get them to use up energy during an already tough season, forcing them to migrate to warmer climates. Unfortunately, we found that doesn’t happen in practice.”

The study isn’t the first to find harassment doesn’t work, but it is the first to explain why. The researchers used GPS transmitters with Fitbit-like movement trackers to learn where Canada geese go and how their behavior changes when they’re harassed.

Ward’s doctoral student, Ryan Askren, now a postdoctoral researcher at the University of Arkansas-Monticello, worked with USDA-Wildlife Services personnel to harass Canada geese at Marquette Park near Midway Airport in Chicago. During the winters of 2017 and 2018, members of the research team walked or drove toward geese while clacking boards together.

Did the geese leave? Yes. But they returned to the area almost two times faster than on days when they weren’t harassed and left the park on their own.

“When they’re not being harassed, they’re making the choice to leave the park because it’s beneficial to them – there’s a resource elsewhere they want to access,” Askren says. “Whereas when we’re harassing them, they probably have a biological reason to be there. There’s some sort of resource, such as food or water, and they want to be there at that moment.

“When we harass them, it causes them to leave momentarily, but more than likely they still have that drive to come back. So they’re returning more quickly, whereas the geese that leave in the absence of harassment are staying away to make use of a resource elsewhere.”

Most harassed geese either moved elsewhere in the same park or were back within the hour. Those that did leave went to commercial rooftops, railyards, other parks, water treatment ponds, and sports fields; not exactly migrating long-distance and away from the urban environment.

As for harassment draining energy reserves during a vulnerable time, Ward and Askren didn’t find much evidence for that in geese behavior. Harassed birds spent a little more time flying and in alert mode than geese that weren’t harassed, but they spent just as much time foraging and resting, important factors in the energetic equation.

“I thought using these Fitbit-like devices on the neck collar was a creative way to understand resting, flying, or foraging behaviors. And when Ryan was doing all this physical work to figure out what this accelerometry data would tell us, I was very eager to see what the results were,” Ward says. “But when it was all analyzed, I was like, ‘Wow, that’s not too exciting.’ Basically, when you harass, they fly a little bit more because you’re scaring them, or they might be alert a little more, but it wasn’t a fundamental difference.”

Although harassment didn’t change geese behavior much, the research team noticed a pattern that could be exploited during the worst winter weather.

“If it was crazy cold and snowy, our colleagues did not go out to harass the geese,” Ward says. “But that’s probably when you should harass because the geese are most stressed. If you look at their behavior, they’re going to areas just to rest and essentially wait out this terrible weather. So if you could harass them during those really tough times, they would probably have to leave the area because they wouldn’t be able to find the resources they need to survive.”

Could the outcome have differed with another harassment method? The researchers say it’s possible, but the methods showing the most promise don’t usually go over well with the public.

“The literature suggests unless there’s a lethal aspect to harassment, unless they really have a strong fear that they’re going to die or some of them are actually dying, then most harassment methods just don’t seem to be very effective,” Askren says.

Lastly, the research team wondered if Chicago-based geese simply had acquired more grit in the busy urban environment, making them less easily spooked. Because they had tracked these geese long-term for other studies, the researchers knew which geese were migrants from rural areas and which were longtime Chicago residents. Turns out, neither group was particularly perturbed by harassment.

Askren credits Canada geese with strong adaptability, excellent memory, and a keen ability to discern legitimate threats from mild annoyances. It’s why we likely won’t be rid of them anytime soon.

Ward agrees. “People don’t realize how smart geese are. They’ve learned what the real risks are over the course of their lives or from each other. Maybe we’ll figure out a good harassment technique, but it’s likely they’re going to continue to increase in urban areas because they found a good place. They’re nesting on top of buildings. I mean, who would have ever thought a goose would nest on top of a building? They should be nesting in wetlands. But they’re very adaptable.”