SAN ANTONIO (Feb. 14, 2022) — Aneurysms are weak, bulging portions of blood vessel walls. These blood-filled sacs resemble balloons in structure and have necks like balloons. Some aneurysms have larger necks and are called “wide-neck” aneurysms. These aneurysms, identified through imaging, can be significantly more difficult to treat. 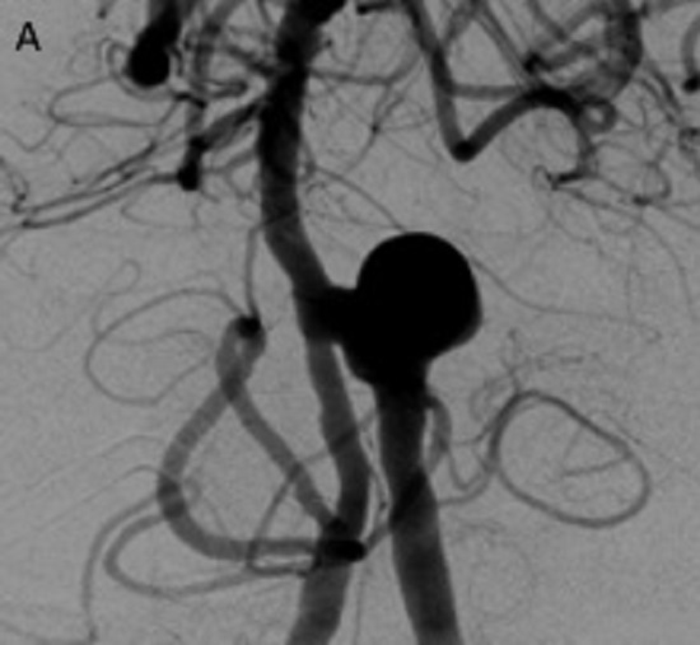 SAN ANTONIO (Feb. 14, 2022) — Aneurysms are weak, bulging portions of blood vessel walls. These blood-filled sacs resemble balloons in structure and have necks like balloons. Some aneurysms have larger necks and are called “wide-neck” aneurysms. These aneurysms, identified through imaging, can be significantly more difficult to treat.

Justin Mascitelli, MD, FAANS, a neurosurgeon at The University of Texas Health Science Center at San Antonio (UT Health San Antonio), is a co-author on recently published multicenter studies that compared a pair of treatments for wide-neck aneurysms: endovascular therapy and microsurgery. One study, published Nov. 5, 2021, evaluated the treatments in ruptured wide-neck aneurysms (the EVERRUN Registry). The second study, published Dec. 24, 2021, made the comparison in unruptured wide-neck aneurysms. The studies are published in the Journal of Neurosurgery and were supported by a 2017 grant from The Bee Foundation.

Endovascular therapy is a minimally invasive way to seal off the aneurysm by means of metal coils and/or mesh stents. The coils or stents are delivered to the aneurysm or blood vessel, respectively, through a catheter. These devices promote thrombosis of the aneurysm and prevention of aneurysm rupture (or rerupture) in the future.

During microsurgery, meanwhile, surgeons approach the aneurysm through the skull using a microscope to surgically dissect the small blood vessels. A small metal clip is placed on the aneurysm neck to seal off the blood flow, again to prevent aneurysm rupture (or rerupture) in the future.

The EVERRUN Registry analysis published Nov. 5 reviewed one-year outcomes of 87 ruptured aneurysms: 55 in patients treated with endovascular therapy and 32 treated with microsurgery. The study demonstrated similar clinical outcomes in the two groups. Microsurgery was longer lasting, with 12.7 percent of patients in the endovascular therapy group needing retreatment versus no patients whose aneurysms were clipped during microsurgery.

“I was not surprised by the results in the ruptured aneurysm cohort of EVERRUN,” Dr. Mascitelli, lead author of the publications, said. “The hypothesis was that microsurgical clipping would compare well to advanced endovascular techniques for ruptured wide-neck aneurysms, which is what we found. In the unruptured aneurysm cohort, however, the complication rate in the microsurgical arm was higher than expected. More investigations are warranted.”

Dr. Mascitelli will continue the studies through a $25,000 grant from the Joe Niekro Foundation. Mr. Niekro was a major league baseball pitcher who died at age 61 in October 2006 after suffering a brain aneurysm. A knuckleballer, he won more than 140 games with the Houston Astros.

The University of Texas Health Science Center at San Antonio, also referred to as UT Health San Antonio, is one of the country’s leading health sciences universities and is designated as a Hispanic-Serving Institution by the U.S. Department of Education. With missions of teaching, research, patient care and community engagement, its schools of medicine, nursing, dentistry, health professions and graduate biomedical sciences have graduated 39,700 alumni who are leading change, advancing their fields, and renewing hope for patients and their families throughout South Texas and the world. To learn about the many ways “We make lives better®,” visit www.uthscsa.edu.