Thousands of images collected from the US, India, Mexico and Kenya showed 83 mammal species, including 12 threatened or endangered 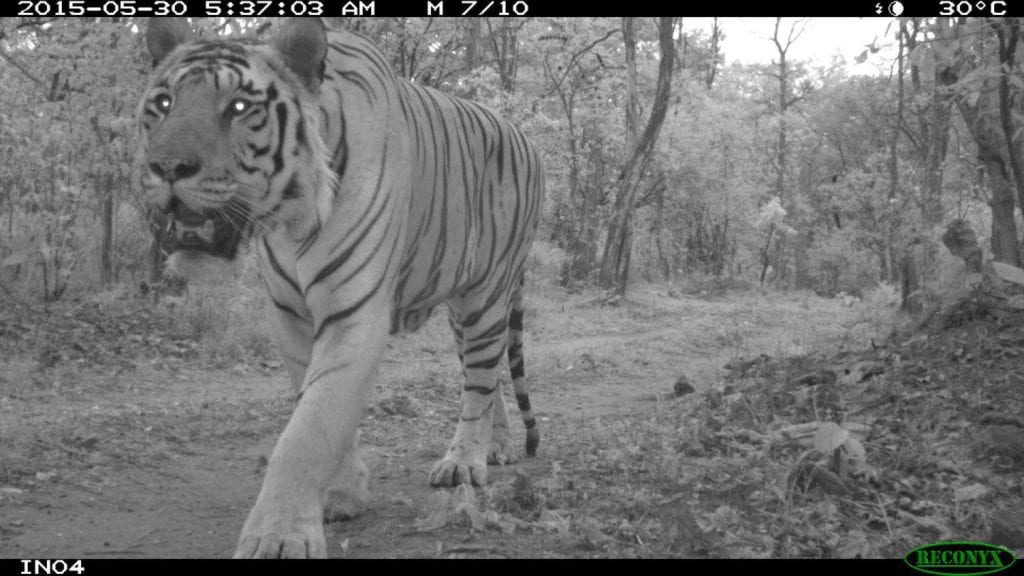 (RALEIGH, N.C.) — Children all over the world are learning science by collecting data and running experiments in their classroom. But what if the data they collected during their school day could be used to help scientists? Turns out, it can. Researchers at the North Carolina Museum of Natural Sciences and NC State University, running a large-scale camera-trap study called eMammal, recently enlisted the help of K-12 students from 28 schools and four countries — the United States, India, Mexico and Kenya. What the researchers, and the kids, discovered was surprising.

“At first, we were worried the cameras would mostly photograph dogs, cats and rodents,” says Stephanie Schuttler, Museum Research Associate and lead author of a new paper highlighting the results of the study. “We were surprised by the results. The camera traps set by these kids yielded thousands of images with a total 83 native mammal species, including 12 that were threatened or endangered. For example, students photographed the endangered black rhinoceros, Bengal tiger, Grevy’s zebra and Asiatic wild dog. And in one instance, students at a school in India caught more tigers on their camera traps than researchers did in nearby Bor Tiger Reserve and Pench National Park.”

Schuttler and her colleagues initially worked with participating teachers to match eMammal’s scientific protocols to the education standards that the teachers needed to cover. Then over the past four years, the teachers would help their students (as young as nine years old) set up motion-activated cameras on or near their school grounds, upload resulting photos into the eMammal software, and identify the species that were photographed. Scientists later verified each photo to make sure the identifications were correct.

What’s so important about discovering school-ground species? Due to the large-scale decline of biodiversity across the globe, scientists need to monitor trends for conservation purposes — particularly in the spaces near where people live, work and go to school — to understand how people and wildlife can coexist. To determine how school habitat measured up to natural areas, researchers compared species diversity from this study to previous studies involving adult citizen scientists and professional researchers in nearby protected areas. They found that in most countries, species diversity at schools was comparable to those of parks. They also found that children performed as well as adult citizen scientists in setting and monitoring camera traps.

“Citizen science is hardly ever implemented in classrooms and when it is, it is very labor-intensive on the scientists’ behalf,” Schuttler notes. “With eMammal, we have kids collecting camera trap images on a variety of mammal species from four countries, making it an effective and non-labor intensive way to gather data that helps us understand the distribution, abundance and behavior of mammals across the world, all while providing students with a hands-on lesson in real science.”

Additionally, teachers reported that eMammal engaged their students and provoked their curiosity, and that the students were more willing to participate in eMammal than in other classroom activities. When the students became aware that the photos they collected would be stored in a Smithsonian repository acting as digital museum specimens, it gave their classroom activities meaning and purpose, resulting in the students’ setting cameras more carefully and caring more about the data.

The students also learned real-world lessons about communication and conservation. Schools organized events in which their photographs were displayed, leading to community discussions about the management and conservation of local mammals. Students in Mexico even engaged directly with government officials, presenting their results to the mayor of Guadalajara. Overall, the researchers found that children can collect valuable mammal monitoring data using camera traps while connecting with nature and learning through their own scientific discoveries.

A video about this research, for media use, can be found here: https://youtu.be/TEOgOQgsv1A

For teachers wanting to get involved with eMammal, visit emammal.si.edu/students-discover.

This work was conducted with funding from the National Science Foundation grant #1319293 and through the Museums Connect Grant from the American Alliance of Museums, U.S. Department of State, and Bureau of Educational and Cultural Affairs.

Abstract: Citizen science has been touted as an effective means to collect large-scale data while engaging the public. We demonstrate that children as young as 9 years old can collect valuable mammal monitoring data using camera traps while connecting with nature and learning through their own scientific discoveries. Indian, Kenyan, Mexican, and American students used camera traps near their schools and detected 13-37 species, all of which were verified by professionals. These data describe rich mammal faunas near schools, sometimes surpassing nearby protected areas, and included five endangered species. Ninety-four percent of the camera traps were set in accordance with scientific protocols, and the teachers reported the experience as highly engaging for their students. Furthermore, the generated photos and results had community-wide impacts involving local politicians, community members, and the media. We show that children can run sensors to contribute valid scientific data important for conservation and research.

Coral larvae use sound to find a home on the reef