Structure of virus that infects bacteria in hot springs is revealed

Discovery by Rutgers and other scientists could enhance targeted drug delivery 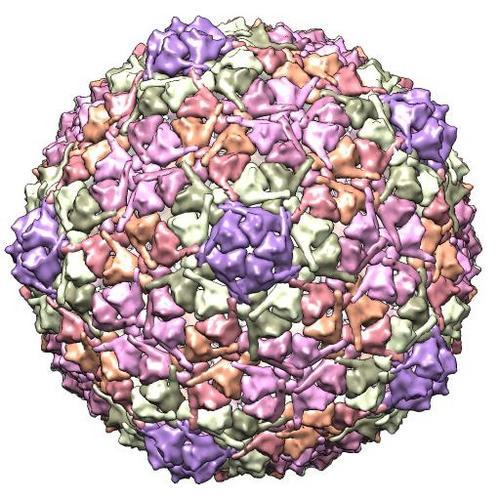 Scientists have revealed the structure of a virus infecting bacteria that thrive in 160-degree hot springs in places like Yellowstone National Park in Wyoming.

The discovery could lead to better targeted delivery of drugs into cells and new DNA sequencing technology, according to a study by Rutgers and other scientists in the Proceedings of the National Academy of Sciences.

The scientists studied a virus that infects bacteria (Thermus thermophilus) taken from a hot spring in Kamchatka, Russia.

“We literally go ‘hunting’ for these viruses and bacteria they infect in hot springs in the United States, Chile, Russia, Italy and other countries,” said study co-author Konstantin Severinov, a principal investigator at the Waksman Institute of Microbiology and professor of molecular biology and biochemistry at Rutgers University-New Brunswick.

Viruses that infect bacteria have a protein shell that forms a “head” shaped like a polyhedron with 20 triangular faces. Inside the head, the virus’s DNA is packaged very tightly – almost as dense as a crystal – and under great pressure. When a virus binds to a cell that it infects, the pressure is released through a small hole, or portal, in the virus head. Then viral DNA is rapidly injected into the cell.

In the course of infection, empty virus heads form inside a cell and then are filled with viral DNA through the portal using a special viral “packaging machine,” Severinov said. The study showed how DNA can be packed into the head in a test tube.

“The ability to pack DNA into viral heads and then release it under pressure through a portal in a controlled manner can be very important for the targeted delivery of molecules, including drugs, into various cells,” he said. “It may also be a game changer for the development of new DNA sequencing technology, where single DNA molecules will be rapidly threaded through a membrane by a packaging machine.”

“The packaging machine of the virus that we studied is very robust, which should allow its further development for practical needs in drug discovery and biotechnology.”

Next steps include trying to figure out how to thread various DNA molecules through the portal while simultaneously reading the sequence of DNA that passes through it, he said.