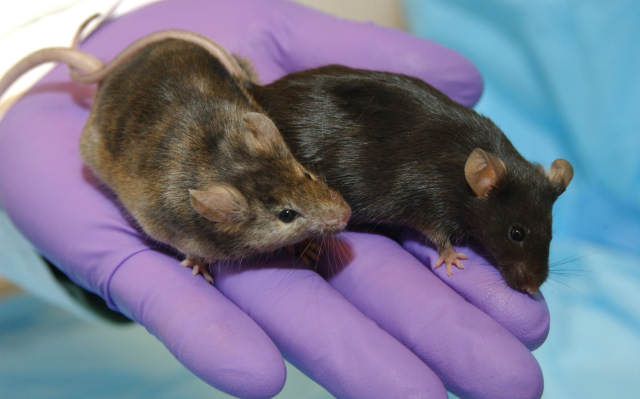 Findings from the study were published recently in PLOS ONE.

The researchers treated 10-day-old mice that had incurred hypoxic-ischemic brain injury (caused by a decrease in blood flow and oxygen to the brain, as occurs during a stroke) with a fat emulsion containing either DHA or EPA–omega-3 fatty acids that are found in certain foods and in supplements. The researchers evaluated the mice’s neurological function 24 hours and 8 to 9 weeks after the brain injury.

EPA and DHA are bioactive omega-3 fatty acids that are found in oils extracted from cold-water fish. The CUMC researchers and other scientists have shown that these fish-oil fatty acids protect organs and cells in numerous ways after oxygen deprivation, reducing inflammation and cell death.

At 24 hours, mice treated with DHA, but not EPA, had a significant reduction in brain injury. In the following weeks, the DHA group also had significantly better results in multiple brain functions compared to the EPA-treated mice and untreated (control) mice.

The researchers also discovered that these mice had increased concentrations of DHA in their brain mitochondria, energy-producing structures in cells that can be injured by free radicals when blood flow is restored to the brain after a stroke. This process, known as reperfusion injury, is a common cause of brain damage following the oxygen and nutrient deprivation that occurs after a stroke.

“Our findings suggest that injecting the omega-3 fatty acid DHA after a stroke-like event has the ability to protect brain mitochondria against the damaging effects of free radicals,” said senior co-author, Vadim S. Ten, MD, PhD, associate professor of pediatrics at CUMC.

Interruption of blood flow and oxygen supply to the brain during or shortly after birth is a major cause of brain damage in newborns, causing life-long neurological impairments in more than 25 percent of those affected. Many of the pathways involved in this type of brain damage are similar to those in an adult stroke.

“Clinical trials are needed to determine if administering lipid emulsions containing DHA shortly after a stroke-like brain injury offers the same neuroprotective effects in babies and adults, as seen in mice. If successful, such trials could lead to the development of a novel therapy for stroke in newborns, children, and adults, addressing a major medical need,” said senior co-author Richard J. Deckelbaum, MD, CM, the Robert R. Williams Professor of Nutrition (in Pediatrics) and Professor of Epidemiology and director of the Institute of Nutrition at CUMC.

Columbia University Medical Center provides international leadership in basic, preclinical, and clinical research; medical and health sciences education; and patient care. The medical center trains future leaders and includes the dedicated work of many physicians, scientists, public health professionals, dentists, and nurses at the College of Physicians and Surgeons, the Mailman School of Public Health, the College of Dental Medicine, the School of Nursing, the biomedical departments of the Graduate School of Arts and Sciences, and allied research centers and institutions. Columbia University Medical Center is home to the largest medical research enterprise in New York City and State and one of the largest faculty medical practices in the Northeast. For more information, visit cumc.columbia.edu or columbiadoctors.org.

The Institute of Human Nutrition (IHN) provides outstanding academic, professional education and training programs in human nutrition, and conducts basic science and translational research on the role of nutrition in human health. IHN programs include projects, symposia and other initiatives for health practitioners, scientists, policy makers, educators, and individuals that advance understanding of the importance of nutrition for individuals and populations worldwide.