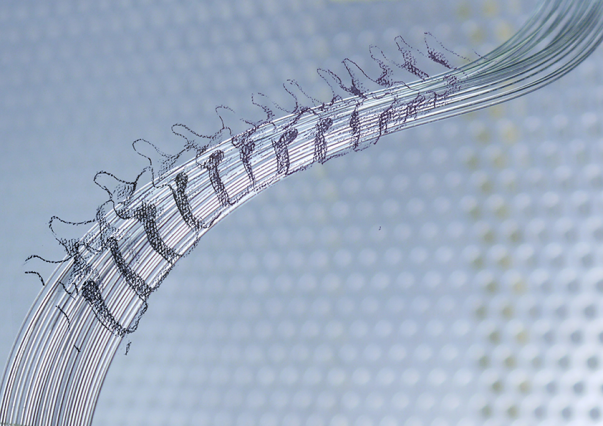 Polymer fibers designed to mimic fibrous nerve geometry allow for simultaneous optical stimulation and neural recording in the spinal cord. This image illustrates the flexibility of the bifunctional neural probes and their ability to accommodate deformation due to the movement of vertebrae.

MIT researchers have demonstrated a highly flexible neural probe made entirely of polymers that can both optically stimulate and record neural activity in a mouse spinal cord — a step toward developing prosthetic devices that can restore functionality to damaged nerves.

"Our goal was to create a tool that would enable neuroscientists and physicians to investigate spinal-cord function on both cellular and systems levels with minimal impact on the tissue integrity," notes Polina Anikeeva, the AMAX Assistant Professor in Materials Science and Engineering and a senior author of the paper published Nov. 7 in Advanced Functional Materials.

Department of Materials Science and Engineering graduate student Chi (Alice) Lu, who designed and implanted the probe, is the lead author of the study. Co-authors include Ulrich Froriep of the Simons Center for the Social Brain; Ryan Koppes of the Research Laboratory of Electronics; Andres Canales and Jennifer Selvidge of the Department of Materials Science and Engineering; and Vittorio Caggiano and Emilio Bizzi of the McGovern Institute for Brain Research. Professor Yoel Fink provided access to the fiber-drawing tower.

Although optogenetics, a method that makes mammalian nerve cells sensitive to light via genetic modification, has been applied extensively in investigation of brain function over the past decade, spinal-cord research has lagged. Earlier this year Caggiano and Bizzi have demonstrated inhibition of motor functions using optogenetics, and now the collaboration between the two groups yielded a device suitable for spinal optical excitation of muscle activity, while giving the researchers an electrical readout.

"Working in a spinal cord is significantly more difficult than in the brain because it experiences more movements. The radius of the mouse spinal cord is about 1 millimeter, and it is very soft, so it took some time to figure out how to design a device that would perform the stimulation and recording without damaging that tissue," Lu explains.

The fiber was drawn from a template nearly 1.5 inches thick to its final diameter comparable to that of a human hair. It is flexible enough to be tied in a knot. The probe consists of a transparent polycarbonate optical core; parallel conductive polyethylene electrodes for recording neuronal electrical activity; and cyclic olefin copolymer acting both as electrical insulation and optical cladding. The flexible probe maintains its optical and electrical functions when bent by up to 270 degrees at very small radii of curvature (e.g. 500 µm), albeit with somewhat diminished light-carrying capacity at those conditions. The device still performed well after repeated bending and straightening, holding up under stresses expected from normal body movements, the report shows. MIT has filed a patent on the device platform.

The researchers conducted experiments with their neural probe in genetically-altered mice that express the light-sensitive protein channelrhodopsin 2(ChR2) labeled with yellow fluorescent protein. The ChR2 makes neurons in the mice respond to blue light. These mice, developed by Professor Guoping Feng and colleagues at the McGovern Institute for Brain Research, provide a convenient model system for optoelectronic neural prosthetics. "When pulses of blue light are delivered to the spinal cord, we can directly observe neuronal response by getting an electrical recording," explains Lu, who entered the third year of her doctoral program this fall.

"Laser pulses … delivered through the [polycarbonate] core of the fiber probe robustly evoked neural activity in the spinal cord, as recorded with the … electrodes integrated within the same device," the researchers report.

The fiber was inserted into the proximal lumbar section of the spinal cord in mice, and light delivered through it triggered activity in one of the calf muscles, the gastrocnemius muscle. The results in the optically-sensitive mice were validated by comparison with results in wild type mice, which showed no response to the optical trigger. A toe pinch showed the device could still record mechanically stimulated neuronal activity in the wild-type mice. The researchers monitored muscle activity through electromyographical (EMG) recording, while the conductive polyethylene electrodes in the new device recorded neuronal activity in the spinal cord.

The MIT researchers' combination in a single system of both recording activity from neurons and stimulating neurons with light is new, says Ravi V. Bellamkonda, the Wallace H. Coulter Professor and Department Chair of Biomedical Engineering at Georgia Institute of Technology and the Emory School of Medicine. "In principle, one would like to use 'closed-loop' systems, i.e., you detect a neurological event — like the brain wanting to move a limb — and then stimulate to affect that function when the natural link between them is severed due to an injury like spinal cord damage," he explains.

"This is excellent engineering combining electrical and optical engineering for an important biological application — modulation of neural function in a closed-loop way. I am eager to see this technology being used in a biologically significant ways in the future," Bellamkonda says.

The work was funded in part by grants from the National Science Foundation through the Center for Sensorimotor Neural Engineering and Center for Materials Science and Engineering; the McGovern Institute for Brain Research Neurotechnology Program; and the Simons Foundation.