Patients identified by nuclear stress testing as having severe stress-induced myocardial ischemia (lack of blood flow to the heart) are likely to benefit from heart bypass surgery or angioplasty, while those with mild or no ischemia are not, according to a new study from the Icahn School of Medicine at Mount Sinai. 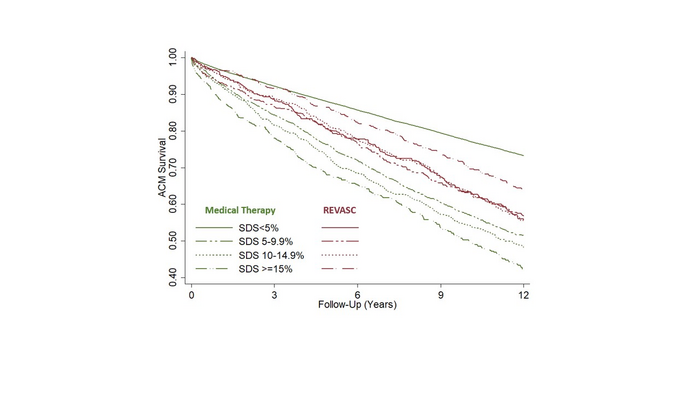 Patients identified by nuclear stress testing as having severe stress-induced myocardial ischemia (lack of blood flow to the heart) are likely to benefit from heart bypass surgery or angioplasty, while those with mild or no ischemia are not, according to a new study from the Icahn School of Medicine at Mount Sinai.

The research, published July 11 in the Journal of the American College of Cardiology, is the first large-scale study to look at the impact of stress testing on patient management when applied to the full spectrum of patients who have both varying degrees of myocardial ischemia and heart function. This new study can help guide physicians on how to manage caring for patients with suspected heart disease.

Physicians order stress tests when they suspect that a patient’s chest pain or other clinical symptoms are from coronary artery disease (CAD), or plaque build-up inside the coronary arteries. These help determine if a patient has obstructive CAD which leads to significant ischemia. If the ischemia due to obstructive CAD is severe, physicians can restore adequate blood flow to the heart by performing coronary artery bypass grafting surgery or percutaneous coronary intervention (PCI), a less invasive procedure in which interventional cardiologists use a catheter to place stents in the blocked coronary arteries to restore the blood flow. Nuclear stress testing is the most common stress test used to detect myocardial ischemia.

“There is keen interest in assessing how measurement of myocardial ischemia during stress testing can help shape physicians’ decision to refer patients for coronary revascularization procedures, but this issue has not been well studied among patients who have underlying heart damage,” explains lead author Alan Rozanski, MD, Professor of Medicine (Cardiology) at the Icahn School of Medicine at Mount Sinai, and Director of Nuclear Cardiology and Cardiac Stress Testing and Chief Academic Officer for the Department of Cardiology at Mount Sinai Morningside. “Our study, which evaluated a large number of patients with pre-existing heart damage who underwent cardiac stress testing, finally addresses this clinical void.”

The researchers analyzed records of more than 43,000 patients who underwent nuclear stress testing with suspected CAD between 1998 and 2017 at Cedars Sinai Medical Center in Los Angeles with a median 11-year follow-up for mortality/survival. The investigators grouped patients according to both their level of myocardial ischemia during stress testing as well as their left ventricular ejection fraction (or “LVEF”), which measures the percent of blood volume pumped out of the heart’s main chamber during each heartbeat. Low LVEF measurements indicate prior heart damage that could be from scarring of the heart due to a prior heart attack.

The study provides two important clinical insights. First, the study showed that the frequency of myocardial ischemia during stress testing varies according to patients’ heart function. Of the 39,883 patients with normal heart function (LVEF above 55 percent), fewer than 8 percent of them had ischemia. However, among the 3,560 patients with reduced heart function (LVEF less than 45 percent, which indicates prior heart damage), more than 40 percent of them had myocardial ischemia. The study also showed that the presence of myocardial ischemia increases the risk of death in patients with normal and reduced heart function. Among both groups of patients, performing bypass or PCI procedures was not associated with improved survival among the large percentage of patients who had either no or only mild ischemia during the cardiac stress test. Among patients with severe ischemia, coronary procedures were associated with more than 30 percent higher survival rates compared to those managed with medication only. This was the case for patients with and without heart damage.

“These results confirm the benefits of stress testing for clinical management. What you want from any test when considering coronary revascularization procedures is that the test will identify a large percentage of patients who are at low clinical risk and do so correctly, while identifying only a small percentage of patients who are at high clinical risk and do so correctly. That is what we found with nuclear stress testing in this study,” explains Dr. Rozanski. “Importantly, the presence of severe ischemia does not necessarily mean that coronary revascularization should be applied. New data from a large clinical trial suggests that when medical therapy is optimized it may be as effective as coronary revascularization in such patients. But regardless, the presence of severe ischemia indicates high clinical risk which then requires aggressive management to reduce clinical risk.”

Mount Sinai Health System is one of the largest academic medical systems in the New York metro area, with more than 43,000 employees working across eight hospitals, over 400 outpatient practices, nearly 300 labs, a school of nursing, and a leading school of medicine and graduate education. Mount Sinai advances health for all people, everywhere, by taking on the most complex health care challenges of our time — discovering and applying new scientific learning and knowledge; developing safer, more effective treatments; educating the next generation of medical leaders and innovators; and supporting local communities by delivering high-quality care to all who need it.

Through the integration of its hospitals, labs, and schools, Mount Sinai offers comprehensive health care solutions from birth through geriatrics, leveraging innovative approaches such as artificial intelligence and informatics while keeping patients’ medical and emotional needs at the center of all treatment. The Health System includes approximately 7,300 primary and specialty care physicians; 13 joint-venture outpatient surgery centers throughout the five boroughs of New York City, Westchester, Long Island, and Florida; and more than 30 affiliated community health centers. We are consistently ranked by U.S. News & World Report‘s Best Hospitals, receiving high “Honor Roll” status, and are highly ranked: No. 1 in Geriatrics and top 20 in Cardiology/Heart Surgery, Diabetes/Endocrinology, Gastroenterology/GI Surgery, Neurology/Neurosurgery, Orthopedics, Pulmonology/Lung Surgery, Rehabilitation, and Urology. New York Eye and Ear Infirmary of Mount Sinai is ranked No. 12 in Ophthalmology. U.S. News & World Report’s “Best Children’s Hospitals” ranks Mount Sinai Kravis Children’s Hospital among the country’s best in several pediatric specialties. The Icahn School of Medicine at Mount Sinai is one of three medical schools that have earned distinction by multiple indicators: It is consistently ranked in the top 20 by U.S. News & World Report‘s ”Best Medical Schools,” aligned with a U.S. News & World Report ”Honor Roll” Hospital, and top 20 in the nation for National Institutes of Health funding and top 5 in the nation for numerous basic and clinical research areas. Newsweek’s “The World’s Best Smart Hospitals” ranks The Mount Sinai Hospital as No. 1 in New York and in the top five globally, and Mount Sinai Morningside in the top 20 globally. For more information, visit https://www.mountsinai.org or find Mount Sinai on Facebook, Twitter, and YouTube.

Journal of the American College of Cardiology