Stress protein in fibroblasts may be a good target for future cancer drugs, Penn study finds

PHILADELPHIA — A stress protein that is overactive in many types of tumor cells also has a key role in tumor-supporting cells called fibroblasts, and may be a good target for future cancer treatments, suggests a study from researchers at the Perelman School of Medicine at the University of Pennsylvania. 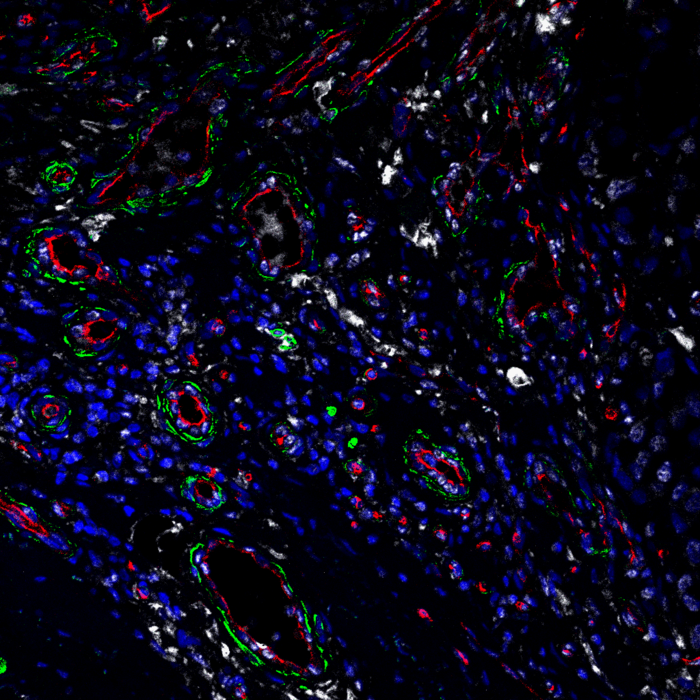 PHILADELPHIA — A stress protein that is overactive in many types of tumor cells also has a key role in tumor-supporting cells called fibroblasts, and may be a good target for future cancer treatments, suggests a study from researchers at the Perelman School of Medicine at the University of Pennsylvania.

The researchers, whose findings appear in Nature Cell Biology, discovered in experiments with mouse models of pancreatic cancer and melanoma that the stress protein, known as ATF4, enables fibroblasts to support tumor growth by promoting the formation of tumor-serving blood vessels. Deleting ATF4 in fibroblasts severely impaired new tumor-supportive vessel formation as well as tumor growth, without causing significant harm to the mice, the researchers found.

“Our results suggest that inhibiting ATF4 could work against many types of cancer, and we’re now actively pursuing that strategy,” said study senior author Constantinos Koumenis, PhD, the Richard H. Chamberlain Professor of Research Oncology in the department of Radiation Oncology at Penn. “Every tumor we’ve looked at upregulates ATF4.”

The study’s first author, who performed most of the experiments, was Ioannis Verginadis, PhD, a senior research investigator and adjunct assistant professor in Koumenis’s laboratory.

ATF4 is produced in cells as part of a broad response to stresses such as oxygen- or nutrient-deprivation. It works as a master switch for the activities of hundreds of genes that help cells survive these stresses. As Koumenis’s laboratory and others have shown in recent years, many tumor types rely on this ATF4-associated stress response to survive despite the severe stresses they create for themselves by their rapid growth.

The researchers began the new study by engineering mice whose ATF4 gene could be deleted body-wide at any time. They found that if they deleted ATF4 before or even after tumors began growing in the mice, the growth of the tumors and their ability to spread to distant organs were greatly impaired. The scientists then used a powerful and relatively new technique called single-cell RNA sequencing to examine the impact of ATF4 deletion in all the cell types within the tumor—and observed a strikingly large effect on a population of tumor-supporting cells called cancer-associated fibroblasts (CAFs).

Fibroblasts are support cells that exist in virtually all organs, producing the key structural protein collagen, promoting new blood vessel formation, and generally assisting with tissue repair and maintenance. Many tumor types co-opt nearby fibroblasts, switching them to CAF mode in which they principally support the tumor. However, the researchers observed that in their ATF4-deficient mice, CAFs often lacked the usual markers of activation, and were defective in producing collagen and secreting molecules that promote new vessel growth. As a result, levels of collagen and tumor-supplying blood vessels were greatly reduced within the mouse tumors, causing large die-offs of tumor cells.

“These findings indicate that ATF4’s support for tumors is mediated to a great extent by CAFs,” Verginadis said.

Underscoring the likely relevance of their results to human cancers, the researchers found that in tumor tissue from human pancreatic cancer and melanoma patients there was a significant correlation between markers of ATF4 activity and markers of collagen production. Moreover, in the melanoma cases, higher collagen production correlated with worse prognoses.

The researchers are hopeful that targeting ATF4 won’t have unacceptable side effects, since the mice in which the gene was deleted in adulthood showed only modest and temporary weight loss and other minor abnormalities.

“On the whole, ATF4 appears to be an attractive cancer target,” Koumenis said. “A drug that inhibits it would block its pro-tumor effect not only in tumor cells but also in cancer-associated fibroblasts, so it should be a double-whammy for the tumor. But we’re still a few years away from that.”

Koumenis’s laboratory is now working to develop inhibitors of ATF4 that could be tested in further animal studies and ultimately in human cancer patients.