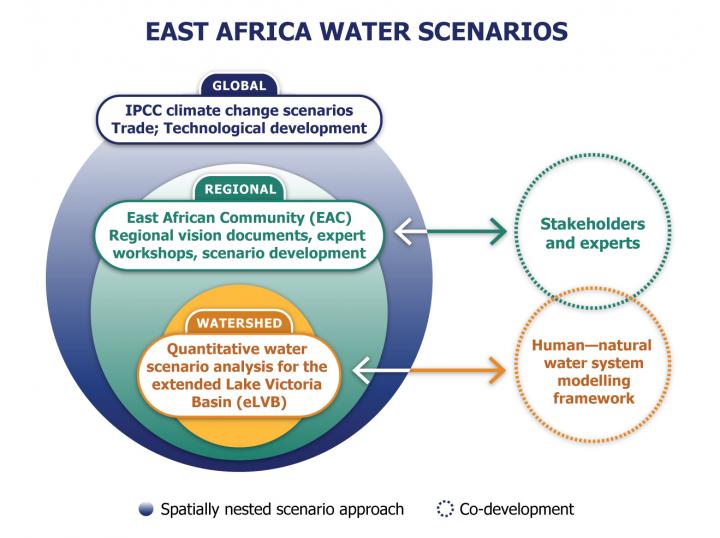 IIASA researchers worked with local stakeholders from the East African Community to explore and co-develop regional water scenarios that can enhance understanding of the up- and downstream water sector interactions in the extended Lake Victoria Basin to facilitate rational water resource planning.

East Africa is the world’s fastest growing region outside of Asia, with an estimated growth of 5% and above over the last decade. Part of this success can likely be attributed to the East Africa Vision 2050, which was launched in 2015 by the Heads of States of the East African Community (EAC) – an intergovernmental organization composed of six countries in the African Great Lakes region in eastern Africa. If the region’s rapid development were to continue in a sustainable manner, it will have beneficial impacts for the entire African continent. The region’s dynamic socioeconomic development – which is characterized by rapid economic and population growth, along with a growing rate of urbanization – will lead to increased water demand and put pressure on water quality. As the water sector is a lever for development, understanding the up- and downstream linkages in hydrological processes and human water use is essential for water resources planning in river basins.

To contribute to and facilitate such understanding, IIASA researchers undertook a quantitative modeling analysis for the transboundary headwaters of the Nile – the extended Lake Victoria Basin, which incorporates parts of seven countries and the basins of all inflows into Lake Victoria, as well as the basins of the Victoria and Albert Niles. Guided by the basin approach (a key principle in integrated water-resource management) the researchers worked with local stakeholders from the EAC and the Lake Victoria Basin Commission to explore and co-develop regional water scenarios that could be used to explore possible development pathways up to 2050 against the background of uncertain futures. Co-development of scenarios such as the researchers undertook in this study are rare, as is the combined modeling of socioeconomic and biophysical (climate change, land use change, and environmental constraints) aspects, which makes the contribution of this novel work quite significant.

“Together with local stakeholders, we assessed upstream and downstream water sector interactions in the extended Lake Victoria Basin to determine the best approach for rational water resource planning,” explains Sylvia Tramberend, a researcher with the IIASA Water Security Research Group and first author of the study published in the journal One Earth. “Scenarios are an essential part of sustainability research as they help make the long-term consequences of near-term decisions understandable. In this case, the scenarios we co-developed in close collaboration with stakeholders in East Africa, aids in the identification of sustainable water-development pathways to leverage development opportunities and contribute to development. By using scenarios to portray alternative plausible development pathways, we can pursue sustainable, long-term water security.”

The study’s scenario assessments suggest that water use and withdrawal will increase significantly (at least fourfold) due to population and GDP growth, coupled with ambitions to significantly increase irrigation for agricultural purposes, which is currently almost non-existent in the region. Furthermore, climate change is likely to increase variability, marked by a seasonal shift in rainfall and more pronounced dry and wet periods, although this scenario is subject to a high degree of uncertainty. In addition, respecting environmental flow requirements – in other words, making sure that enough freshwater is retained in rivers and lakes throughout the year to sustain water ecosystem services – will require a significant proportion of water infrastructure in the region to rely on advanced technologies to ensure efficient water use, which are often more costly.

In light of the above, the researchers urge that the ongoing regional integration of East Africa requires that harmonization of water policy be a priority in the urgently needed development of water infrastructure, which makes interconnected analyses over time and guided by co-developed scenarios, indispensable for planning sustainable water-development pathways. The analyses of water systems must bridge the gap from the local to the regional and global scales, making cooperation and co-development of strategies and approaches to achieve this critical. Although there are still many challenges that need to be overcome in this regard, the researchers point out that the co-development of scenario narratives worked reasonably well. They however note that significantly more resources are needed to achieve true co-development between modeling exercises, which usually require input from experts and researchers, while also taking into account what stakeholders need.

“Water is a pivotal sector for sustainable development and requires smart investment strategies. Similarly important is that we foster co-development initiatives and analyses that respect both upstream and downstream interactions. This requires institutions whose mandate covers entire watersheds like the Lake Victoria Basin Commission who we worked closely with on this assessment. Strengthening these institutions is critical for water security enabled by effective implementation of sustainable development pathways,” concludes Hilda Luoga, Projects Development Officer with the East African Community in the Lake Victoria Basin Commission.

The International Institute for Applied Systems Analysis (IIASA) is an international scientific institute that conducts research into the critical issues of global environmental, economic, technological, and social change that we face in the twenty-first century. Our findings provide valuable options to policymakers to shape the future of our changing world. IIASA is independent and funded by prestigious research funding agencies in Africa, the Americas, Asia, and Europe.
http://www.iiasa.ac.at