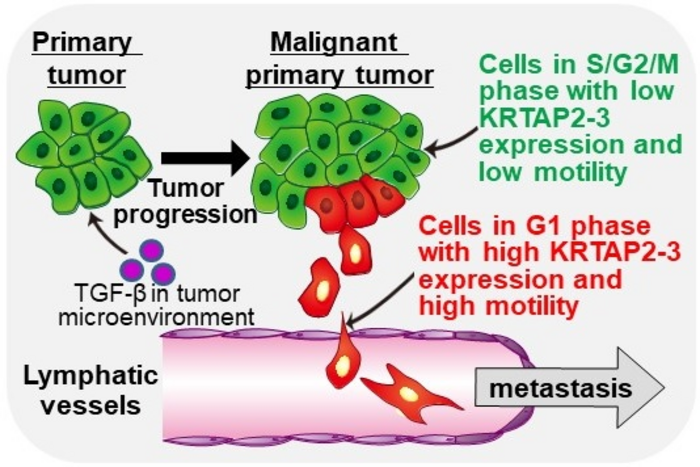 Tokyo, Japan – The process of metastasis is when cancer cells gain motility and spread to other sites of the body. Because this is one of the main causes of cancer-related deaths, researchers have aimed to develop therapeutic strategies that can block metastasis. In a recent article published in Cell Reports, a team led by researchers at Tokyo Medical and Dental University (TMDU) describe how a cell signaling molecule called transforming growth factor-β (TGF-β) can help oral cancer cells acquire such dangerous motility.

Epithelial-mesenchymal transition (EMT) occurs when cancer cells obtain more stem-like and invasive properties, and is induced by various signals and stimuli within the tumor microenvironment. The group focused on the signaling molecule TGF-β as its reported effects seem contradictory: TGF-β can induce EMT in cancer cells but also seems to block their proliferation by keeping them in an early phase of the cell division cycle called G1. Therefore, the researchers aimed to characterize the molecular details of these mechanisms at the single-cell level.

“It is not fully clear if tumor cells stimulated by TGF-β can display both EMT induction and cell cycle arrest,” says lead author of the study Kazuki Takahashi. “Single-cell analysis will help us understand if these events occur in distinct cell populations.”

To examine this, the team utilized specially engineered versions of oral cancer cells that fluoresce red if they are in the G1 phase or green if they are in any other cell cycle phase. The number of red cells increased when the culture was treated with TGF-β, implying more cells in G1. When examining cell migration in response to TGF-β, most cells that migrated also showed G1 arrest, suggesting a correlation between the two phenotypes.

“We then used a technique called single-cell RNA sequencing to examine gene expression in individual oral cancer cells treated with TGF-β,” explains Tetsuro Watabe, senior author of the article. “Interestingly, these experiments showed that TGF-β can induce EMT in these cells through two different pathways.”

The cells in EMT that showed G1 arrest were a distinct population from those without arrest. Further work showed that these cells were associated with expression of keratin-associated protein 2-3 (KRTAP2-3) which was also observed in the migrated cells.

Overall, these data provide important molecular details of the complex nature of TGF-β in oral cancer cells. By uncovering these mechanisms through single-cell analysis, this research offers crucial information that will help in the development of therapeutic methods targeting metastasis.

The article, “TGF-β generates a population of cancer cells residing in G1 phase with high motility and metastatic potential via KRTAP2-3,” was published in Cell Reports at DOI: 10.1016/j.celrep.2022.111411