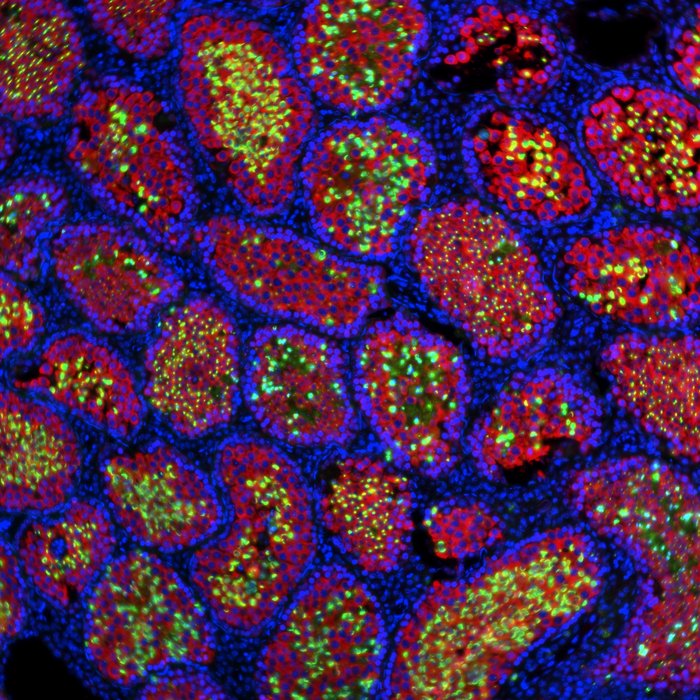 “Our study shows that we can use sterile animals as hosts for the generation of germ cells from other animal species,” says senior author Ori Bar-Nur, a stem cell biologist at ETH Zurich. “Aside from a conceptual advancement, this notion can be utilized to produce endangered animal species gametes inside more prevalent animals. Other implications may involve an improved method to produce rat transgenic models for biomedical research.”

Pluripotent stem cells (PSCs) provide a powerful tool for biomedical research, but the generation of gametes in the form of eggs or sperm cells from PSCs is a highly challenging endeavor. In prior studies, researchers used a technique called blastocyst complementation to generate rat organs in mice using PSCs and mutated mouse embryos that cannot produce specific organs. Building on this work, Bar-Nur and his collaborators wondered whether it would be possible to generate rat sperm inside mice that carry a genetic mutation that otherwise renders them sterile.

To test this idea, the researchers injected rat PSCs into mouse embryos to produce mouse-rat chimeras. An essential gene for sperm production was mutated in the mouse blastocysts. The rat stem cells developed together with the mouse cells, thereby generating a chimeric animal composed of genotypes from the two species. As a consequence of the genetic sterility-inducing mutation, an empty niche developed inside the testes, which enabled the rat cells to colonize them and exclusively generate rat sperm in mouse-rat chimeras. The sperm cells could fertilize rat egg cells, but the embryos did not develop normally or give rise to live offspring.

“We were surprised by the relative simplicity by which we could mix the two species to produce viable mouse-rat chimeras. These animals, by large, appeared healthy and developed normally, although they carried both mouse and rat cells in a chimeric animal,” Bar-Nur says. “The second surprise was that indeed all the sperm cells inside the chimeras were of rat origin. As such, the mouse host environment, which was sterile due to a genetic mutation, was still able to support efficient sperm cell production from a different animal species.”

Although the researchers were able to generate rat sperm cells that morphologically appeared indistinguishable from normal rat sperm cells, these cells were immotile and the fertilization rates of rat eggs was significantly lower in comparison to rat sperm cells produced in rats. Nonetheless, the work provides a proof-of-principle that one can generate sperm cells of one animal species in another by mixing the two species in an artificially generated organism called a chimera. Using sterile mice for genetically modified rat PSCs may speed up the production of transgenic rats to model human diseases in biomedical research.

Moving forward, the researchers will try to produce live animals from rat sperm cells that have been produced in mouse-rat chimeras. “We will need to improve the technique and demonstrate that rat sperm produced in mice can give rise to adult rats when fertilizing rat eggs,” Bar-Nur says.

A more distant plan is to adapt this technique for the production of gametes from endangered rodent species to support animal species conservation efforts. “For example, to the extent we can procure stem cells from an endangered rodent, which at some point in time might become extinct, we may be able to employ the same method to produce its germ cells via chimera production with mice,” Bar-Nur says. “However, it is important to note that several scientific hurdles will need to be overcome to adapt this technique to other animal species. In addition, one still needs to showcase the production of female reproductive cells (i.e., eggs) in female sterile mice, especially if we envision utilizing this technology for species conservation efforts.”

This work was supported by startup funds from ETH Zurich. Other support was provided by the Swiss National Science Foundation, the Good Food Institute Foundation, the Novartis Foundation for Medical-Biological Research, the Helmut Horten Foundation, and the European Research Council.