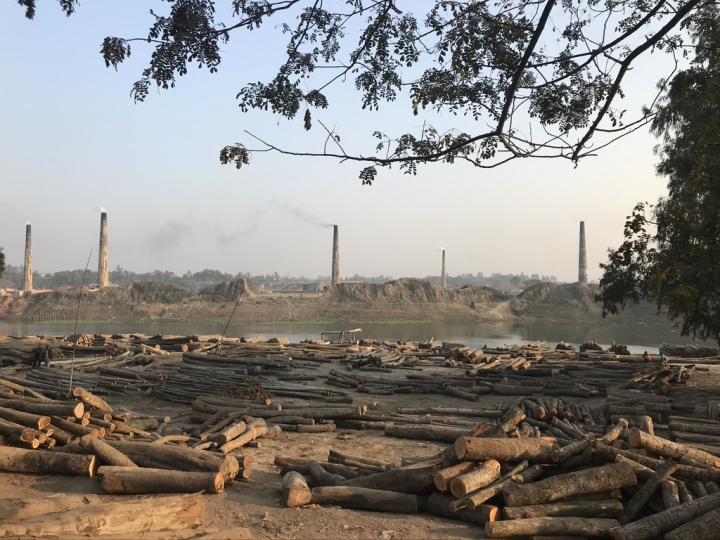 Like superheroes capable of seeing through obstacles, environmental regulators may soon wield the power of all-seeing eyes that can identify violators anywhere at any time, according to a new Stanford University-led study. The paper, published the week of April 19 in Proceedings of the National Academy of Sciences (PNAS), demonstrates how artificial intelligence combined with satellite imagery can provide a low-cost, scalable method for locating and monitoring otherwise hard-to-regulate industries.

“Brick kilns have proliferated across Bangladesh to supply the growing economy with construction materials, which makes it really hard for regulators to keep up with new kilns that are constructed,” said co-lead author Nina Brooks, a postdoctoral associate at the University of Minnesota’s Institute for Social Research and Data Innovation who did the research while a PhD student at Stanford.

While previous research has shown the potential to use machine learning and satellite observations for environmental regulation, most studies have focused on wealthy countries with dependable data on industrial locations and activities. To explore the feasibility in developing countries, the Stanford-led research focused on Bangladesh, where government regulators struggle to locate highly pollutive informal brick kilns, let alone enforce rules.

Bricks are key to development across South Asia, especially in regions that lack other construction materials, and the kilns that make them employ millions of people. However, their highly inefficient coal burning presents major health and environmental risks. In Bangladesh, brick kilns are responsible for 17 percent of the country’s total annual carbon dioxide emissions and – in Dhaka, the country’s most populous city – up to half of the small particulate matter considered especially dangerous to human lungs. It’s a significant contributor to the country’s overall air pollution, which is estimated to reduce Bangladeshis’ average life expectancy by almost two years.

“Air pollution kills seven million people every year,” said study senior author Stephen Luby, a professor of infectious diseases at Stanford’s School of Medicine. “We need to identify the sources of this pollution, and reduce these emissions.”

Bangladesh government regulators are attempting to manually map and verify the locations of brick kilns across the country, but the effort is incredibly time and labor intensive. It’s also highly inefficient because of the rapid proliferation of kilns. The work is also likely to suffer from inaccuracy and bias, as government data in low-income countries often does, according to the researchers.

Eye in the sky

Since 2016, Brooks, Luby and other Stanford researchers have worked in Bangladesh to pinpoint kiln locations, quantify brick kilns’ adverse health effects and provide transparent public information to inform political change. They had developed an approach using infrared to pick out coal-burning kilns from remotely sensed data. While promising, the approach had serious flaws, such as the inability to distinguish between kilns and heat-trapping agricultural land.

Working with Stanford computer scientists and engineers, as well as scientists at the International Centre for Diarrheal Disease Research, Bangladesh (icddr,b), the team shifted focus to machine learning.

Building on past applications of deep-learning to environmental monitoring, and on specific efforts to use deep learning to identify brick kilns, they developed a highly accurate algorithm that not only identifies whether images contain kilns but also learns to localize kilns within the image. The method rebuilds kilns that have been fragmented across multiple images – an inherent problem with satellite imagery – and is able to identify when multiple kilns are contained within a single image. They are also able to distinguish between two kiln technologies – one of which is banned – based on shape classification.

The approach revealed that more than three-fourths of kilns in Bangladesh are illegally constructed within 1 kilometer (six-tenths of a mile) of a school, and almost 10 percent are illegally close to health facilities. It also showed that the government systematically under-reports kilns with respect to regulations and – according to the shape classification findings – over-reports the percentage of kilns using a newer, cleaner technology relative to an older, banned approach. The researchers also found higher numbers of registered kilns in districts adjacent to the banned districts, suggesting kilns are formally registered in the districts where they are legal but constructed across district borders.

The researchers are working to improve the approach’s limitations by developing ways to use lower resolution imagery as well as expand their work to other regions where bricks are constructed similarly. Getting it right could make a big difference. In Bangladesh alone, almost everyone lives within 10 kilometers (6.2 miles) of a brick kiln, and more than 18 million – more than twice the population of New York City – live within 1 kilometer (.6 mile), according to the researchers estimates.

“We are hopeful our general approach can enable more effective regulation and policies to achieve better health and environmental outcomes in the future,” said co-lead author Jihyeon Lee, a researcher in Stanford’s Sustainability and Artificial Intelligence Lab.

The research was funded by the Stanford King Center for Global Development, the Stanford Woods Institute for the Environment and the National Science Foundation.