As the name implies, California market squid are often sold in stores and typically found between Baja California and Monterey Bay. So, the squid’s periodic appearance in the Gulf of Alaska – about 1,200 kilometers (745 miles) north of its expected range – has given researchers pause. 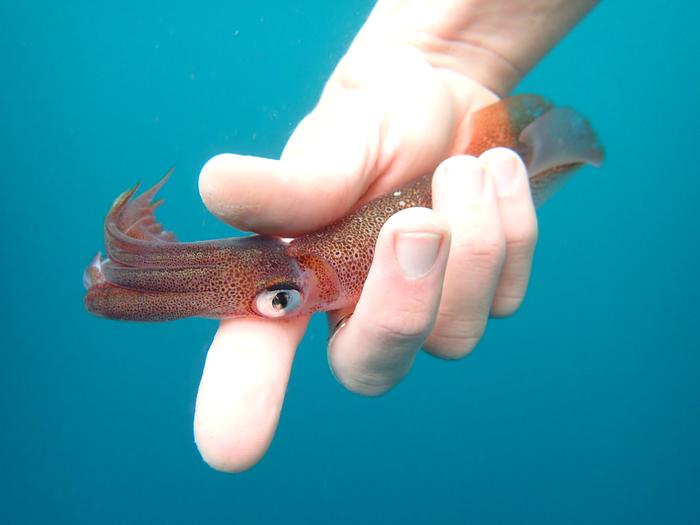 As the name implies, California market squid are often sold in stores and typically found between Baja California and Monterey Bay. So, the squid’s periodic appearance in the Gulf of Alaska – about 1,200 kilometers (745 miles) north of its expected range – has given researchers pause.

The poleward squid sightings prompt two main questions: Why were the squid so far north, and what does it mean for the other animals found in Alaskan waters?

Researchers at Stanford University worked with researchers and educators in Alaska – a citizen science effort – to find answers, which may foretell the outcome of future range shifts driven by climate change for other sea life.

“When animals move, they’re not just sightseeing,” said Benjamin Burford, a former graduate student in biology in the School of Humanities and Sciences at Stanford who led the research. Wherever the squid end up, they will breed, eat, and be eaten, and those actions will have inevitable consequences on the species around them, Burford explained.

The research, which was published March 4 in The American Naturalist, details how climate change has likely ushered the squid north. It also documents significant differences between the Californian and Alaskan market squid populations, which could further complicate how they impact the ecosystems outside their expected range.

The California market squid is a small, short-lived creature often found in shallow waters of the California Current System. Their range has occasionally expanded north, including most recently a significant presence in the Gulf of Alaska that started in 2015. Taking advantage of this current shift, Burford and his team set out to study what this meant for the squid and their new community.

The researchers worked with the Sitka Sound Science Center to recruit local Alaskan high schoolers to help conduct squid surveys. This way, the research team could measure and determine the age and sex of the squid in both California and Alaska simultaneously. “The students got to learn, we got some data, everyone had fun,” said Burford, who is lead author of the study and is now a postdoctoral scholar at the University of California, Santa Cruz.

The team was surprised by the differences in the squid between the two regions. In the squid’s home range, individuals tend to live six months and grow 120 millimeters long on average – about the length of a hotdog. In Alaska, the same species was an extra 40 millimeters longer and almost twice as old on average – similar to average sizes seen in the squid 70 years ago in its usual range. Burford speculates that changing conditions in the California region have limited resource accessibility, causing the squid there to speed through their life cycles.

Though 40 millimeters doesn’t seem like much, it means the squid in Alaska can eat much larger prey beyond its usual crustaceans. The increased size might also allow the squid to eat small fish, which could either be the meal of its important new neighbors or the important neighbors themselves, like young salmon. Thus, the migrant squid may not only be harming the native creatures inhabiting Alaskan waters, but Alaskan fishers as well.

With the changing climate comes changing ecosystems, and members of these ecosystems can respond by moving to more suitable habitats. This is especially true of those with short lifespans, like the California market squid, because they don’t have that much time to wait for conditions to improve.

Since Burford and his team figured that harsher conditions in the home range had encouraged the squid northward, they surveyed various environmental conditions to investigate which ones were the likeliest drivers. The researchers identified a few climate change-related factors – warming waters, decreased oxygen saturation and shifting presence of competing species – that made it easier for any individual squid to meet its needs in Alaska than to meet them in its home range.

These changes in the squid’s habitat did not occur overnight, and neither did their migration. The team estimates that this movement likely took place over six squid generations, approximately three years total.

“As climate change progresses, there are bound to be other species like the California market squid that move to more suitable seas,” said Mark Denny, the John B. and Jean De Nault Professor in Marine Science at Hopkins Marine Station and senior author on the paper. “Investigating what happens to this squid and the ecosystems around them right now will help researchers predict what could happen to other marine life later.”