Scientists have identified a new bird species from the Southern coast of China, that diverged from its Northern relatives around half a million years ago. 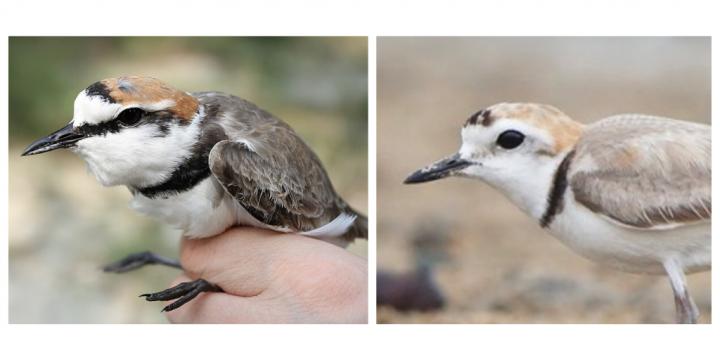 New research by the Milner Centre for Evolution academics in collaboration with Sun Yat-sen University in Guangzhou (China) shows that Southern and Northern breeding populations of plovers in China are in fact two distinct species: Kentish plover (Charadrius alexandrinus) in the North and white-faced plover (Charadrius dealbatus) in the South.

Using state-of-the-art genomics analysis, the team revealed that the Kentish plover and white-faced plover diverged approximately half a million years ago due to cycling sea level changes between the Eastern and Southern China Sea causing intermittent isolation of the two regional populations.

The results show that despite looking very similar, the two plover species have high levels of genetic divergence on their sex chromosomes, (Z chromosome) than on other chromosomes, indicating that sexual selection might play a role to in the evolution of the two species.

Dr Yang Liu, a visiting scholar from Sun Yat-sen University at the Milner Centre for Evolution, led the work. He said: “The initial divergence of the two plovers was probably triggered by the geographical isolation.

“However, other factors, such as ecological specialisations, behavioural divergence, and sexual selection could also contribute to the speciation of the two species.

“In future studies, we wish to understand how these factors operate on plover populations.”

Dr Araxi Urrutia, Senior Lecturer from the Milner Centre for Evolution at the University of Bath, said: “Speciation – the process by which new species evolve – is the basis of all biodiversity around us, yet our understanding of how new species arise is still limited.

“By studying recent divergence patterns, where the two species still able to reproduce with each other, we can better understand the conditions on which all species, including our own species, have evolved.”

The team have published their findings in two papers. The first paper revealed small to moderate differences between Kentish and white-faced plover in their appearance (morphology), diet and behaviour [1]. The second study produced the first genome of the Kentish plover, one of the few published genomes from shorebirds [2].

Dr Liu said: “The genomic resources generated by our team will help investigate other important evolutionary questions, such as genetic basis of local adaptation, migration and mating system variation.”

The research is part of a long-term study on the Kentish plover that has been running for over 30 years, led by Professor Székely.

“These small, drab shorebirds have worldwide distribution, and they are amenable to field studies.

Laws help reduce pollution and do not affect competitiveness, study…