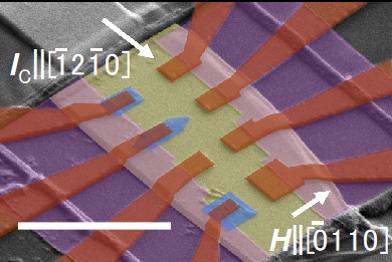 Electric currents drive all our electronic devices. The emerging field of spintronics looks to replace electric currents with what are known as spin currents. Researchers from the University of Tokyo have made a breakthrough in this area. Their discovery of the magnetic spin Hall effect could lead to low-power, high-speed and high-capacity devices. They have created sample devices which can further research into potential applications.

“Electricity lit up the world and electronics connected it,” says Professor Yoshichika Otani from the Institute for Solid State Physics. “Spintronics will be the next step forward in this procession and we can only imagine what advances it may bring.”

So what is spintronics and why should we be excited?

“In essence spintronics is used to transfer information, something we have always used electric currents for,” continues Otani, “but spintronics offers a whole range of advantages, some of which we’re just starting to understand.”

Currently, power efficiency of electrical and electronic devices is a limiting factor in technological development. The problem lies in the nature of electric currents, the flow of charge in the form of electrons. As electrons traverse a circuit they lose some energy as waste heat. Spintronics improves upon the situation – instead of movement it exploits another property of electrons to transfer information, their angular momentum or “spin”.

“In spin currents electrons still move but far less than in a charge current,” explains Otani. “It’s the movement of electrons that typically leads to resistance and waste heat. As we reduce the need for so much electron movement we improve efficiency dramatically.”

To demonstrate this phenomenon researchers created a new kind of material called a ‘non-collinear antiferromagnet’ – Mn3Sn which is a special kind of magnet. In everyday magnets – or ferromagnets – such as you might find on fridge doors, the spins of the electrons within align in parallel which imbues the material with its magnetic effect. In this antiferromagnet the spins of the electrons line up in triangular arrangements such that no one direction is prevalent and the magnetic effect is effectively suppressed.

In Mn3Sn alike spins tend to accumulate on the surface of the material, so it’s cut into thin layers to maximize its surface area and thus the capacity of spin current a sample carries. The researchers have already embedded this material into a functional device to serve as a test bed for possible applications and are excited by the prospects.

“Power efficiency in electrical systems is enough to pique the interest of some, but the use of antiferromagnets to generate spin currents could improve other aspects of technology too,” says Otani. “Antiferromagnets more easily miniaturized, operate at higher frequencies and pack more densely than ferromagnets.”

But how do these ideas translate into applications?

“There is still much work to do including exploration of the underlying principles behind the phenomenon we investigate,” concludes Otani. “Driven by mysteries of exotic materials, I’m thrilled to be part of this technological revolution.”

This work is partially supported by CREST (No. JPMJCR15Q5), Japan Science and Technology Agency, and Grants-in-Aid for Scientific Research (No. 16H02209, 25707030), and by Grants-in-Aids for Scientific Research on Innovative Areas (15H05882, 15H05883, 26103002) and Program for Advancing Strategic International Networks to Accelerate the Circulation of Talented Researchers (Grant No. R2604) from the Japanese Society for the Promotion of Science. H.C. and A.H.M. were supported by SHINES, an Energy Frontier Research Center funded by the US Department of Energy, Office of Science, Basic Energy Sciences under Award #SC0012670.

The Institute for Solid State Physics

The Institute for Solid State Physics, The University of Tokyo

The University of Tokyo is Japan’s leading university and one of the world’s top research universities. The vast research output of some 6,000 researchers is published in the world’s top journals across the arts and sciences. Our vibrant student body of around 15,000 undergraduate and 15,000 graduate students includes over 2,000 international students. Find out more at https://www.u-tokyo.ac.jp/en/ or follow us on Twitter at @UTokyo_News_en.

Swifts are born to eat and sleep in the air