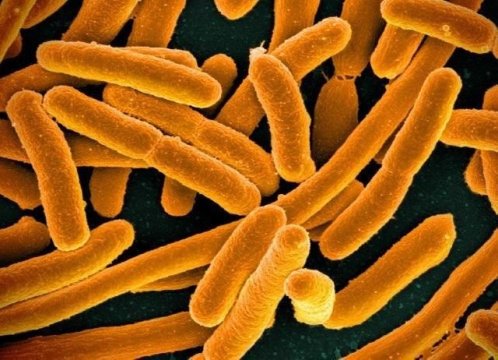 It seems like almost every week another food product is being recalled because of contamination. One of the more common culprits is a pathogenic strain of E. coli. To help prevent illnesses caused by this bacteria in food or water, researchers have developed a new nanosensor to rapidly detect its presence. The study appears in the journal ACS Infectious Diseases.

Millions of illnesses and more than 1,000 deaths every year in the U.S. are attributable to foodborne illness caused by known pathogens, according to the Centers for Disease Control and Prevention. Conventional methods to screen food to find sickness-causing microbes can take as long as 24 hours, which is often too slow to efficiently catch tainted products before they hit store shelves. Faster methods exist, but have limitations. Magnetic resonance, for example, can detect extremely low levels of bacteria, but loses its effectiveness at higher bacteria concentrations. Fluorescence is the opposite. Tuhina Banerjee, Santimukul Santra and colleagues wanted to see if they could combine the two techniques to make a better detector.

The researchers developed a hybrid nanosensor incorporating magnetic resonance and fluorescence. Lab testing of milk showed the detector could sense varying concentrations of a pathogenic strain of E. coli known as O157:H7 in less than an hour. They also used their sensor to analyze E. coli levels in untreated lake water, which serves as a source of household water in some developing areas. Additionally, the device could be customized to detect a wide range of pathogens beyond E. coli, the researchers say.

The above post is reprinted from materials provided by American Chemical Society (ACS). Note: Content may be edited for style and length.