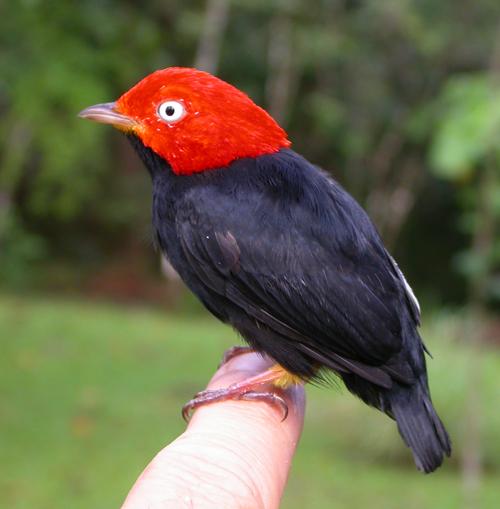 CORVALLIS, Ore. – Free from human disturbance for a century, an inland island in Central America has nevertheless lost more than 25% of its native bird species since its creation as part of the Panama Canal’s construction, and scientists say the losses continue.

The Barro Colorado Island extirpations show how forest fragmentation can reduce biodiversity when patches of remnant habitat lack connectivity, according to a study by researchers at Oregon State University.

Even when large remnants of forest are protected, some species still fail to survive because of subtle environmental changes attributable to fragmentation, and those losses continue over many decades, the scientists say.

Findings, published this week in Scientific Reports, suggest that the island’s bird population is “drying out” – i.e., taking on community characteristics associated with less damp parts of central Panama.

Barro Colorado Island, or BCI, is a 6-square-mile former hilltop jutting from manmade Gatun Lake, created when the Chagres River was dammed as part of the canal project more than 100 years ago. The lake is a primary component of the canal, and the island was set aside as a nature reserve in 1923 by the United States, which then controlled the canal zone.

BCI is probably the best-case example for conservation of tropical diversity in fragmented landscapes, according to Doug Robinson, the Mace Professor of Watchable Wildlife in OSU’s College of Agricultural Sciences. BCI’s surrounding habitats are stable over long periods of time, it is protected from hunting, and there is no resource extraction such as tree harvesting.

BCI is also home to the Smithsonian Tropical Research Institute, which calls the island the world’s most intensively studied tropical forest. Yet BCI is still losing species even after 100 years of protection.

“BCI has been a model system to study species losses such as the ones we report on in this paper,” Robinson said. “The island is unique in that it has been visited by ornithologists since the 1920s, so we have a rare record of inventories spanning the last century. No other tropical site has been studied so long.”

Forests in the tropics display extreme biological diversity, Robinson notes, adding the highest bird diversity on the globe is in tropical America. Tropical landscapes, however, have undergone rapid change through large-scale deforestation, which means habitat loss as well as a lack of connectivity among the forest patches that remain.

“Species disappear from these isolated habitat remnants, but the losses are not immediate nor are the causes of the losses obvious,” said Robinson, who has been doing research on the island for 27 years. “Some of the species disappearances take more than 100 years to materialize and our understanding of the erosion of diversity is in many locations hampered by a lack of tropical studies that span more than a few decades.”

Collaborator Jenna Curtis is a staff member at Cornell University who earned a Ph.D. at Oregon State while working with Robinson. She used the century-long record of bird inventories from BCI and parts of the data Robinson and collaborators have been collecting since 1994 to ask questions about what factors might explain species losses in forest fragments.

To hone-in on the losses among forest-associated resident birds, the study excluded aquatic species, vagrants and non-breeding migrants, as well as birds that forage in the air like vultures, swifts, swallows and nighthawks, whose daily ranges extend well beyond BCI.

“We examined some previously recognized factors that could help explain the risk of extinction, such as initial population size in the remnant patch and traits like preference for certain foods and foraging locations and nest height and type,” Curtis said. “The novel result we identified was that species living in the wettest forests of central Panama were most likely to have disappeared from the island – now the bird community on BCI looks more like a community that you’d find in the less rainy locations in central Panama. Changes in the bird community therefore reflect the idea that the BCI bird community is drying out, even though rainfall itself hasn’t changed.”

The group of scientists, which also included Ghislain Rompre? and Randall Moore of OSU’s Department of Fisheries, Wildlife, and Conservation Sciences and Bruce McCune of the Department of Botany and Plant Pathology, could detect that trend because of the exhaustive surveys, led by Robinson, of birds across central Panama, which has a range of local annual rainfalls.

“The north, the Caribbean coast, is very wet with more than 3 meters of rain per year,” he said. “The Pacific coast on the south is relatively dry. The bird communities in the 24 regions we’ve surveyed are quite different, showing that we could use the rainfall gradient as a way to index habitat preferences of the birds. The birds that live in the wet forests near the north coast were much more likely to have disappeared from BCI than species that can tolerate dry forests.”

When habitat remnants are connected with other patches of undisturbed forest instead of being isolated like BCI, birds could move when conditions were too dry and return when they were more favorable, Curtis said.

“It’s very easy to underappreciate the effects forest fragmentation has on tropical diversity,” she said. “Even when we have large remnants that are protected from human disturbance, we still lose species because of subtle environmental changes, and those losses continue to occur over a very long time. Thus connecting forest remnants will be very important for the long-term preservation of tropical bird diversity.”

Funding this study were the Achievement Rewards for College Scientists Foundation Oregon Chapter, the Oregon Lottery, Thomas G. Scott, the Coombs-Simpson Memorial Fellowship and the OSU Department of Fisheries, Wildlife, and Conservation Sciences.