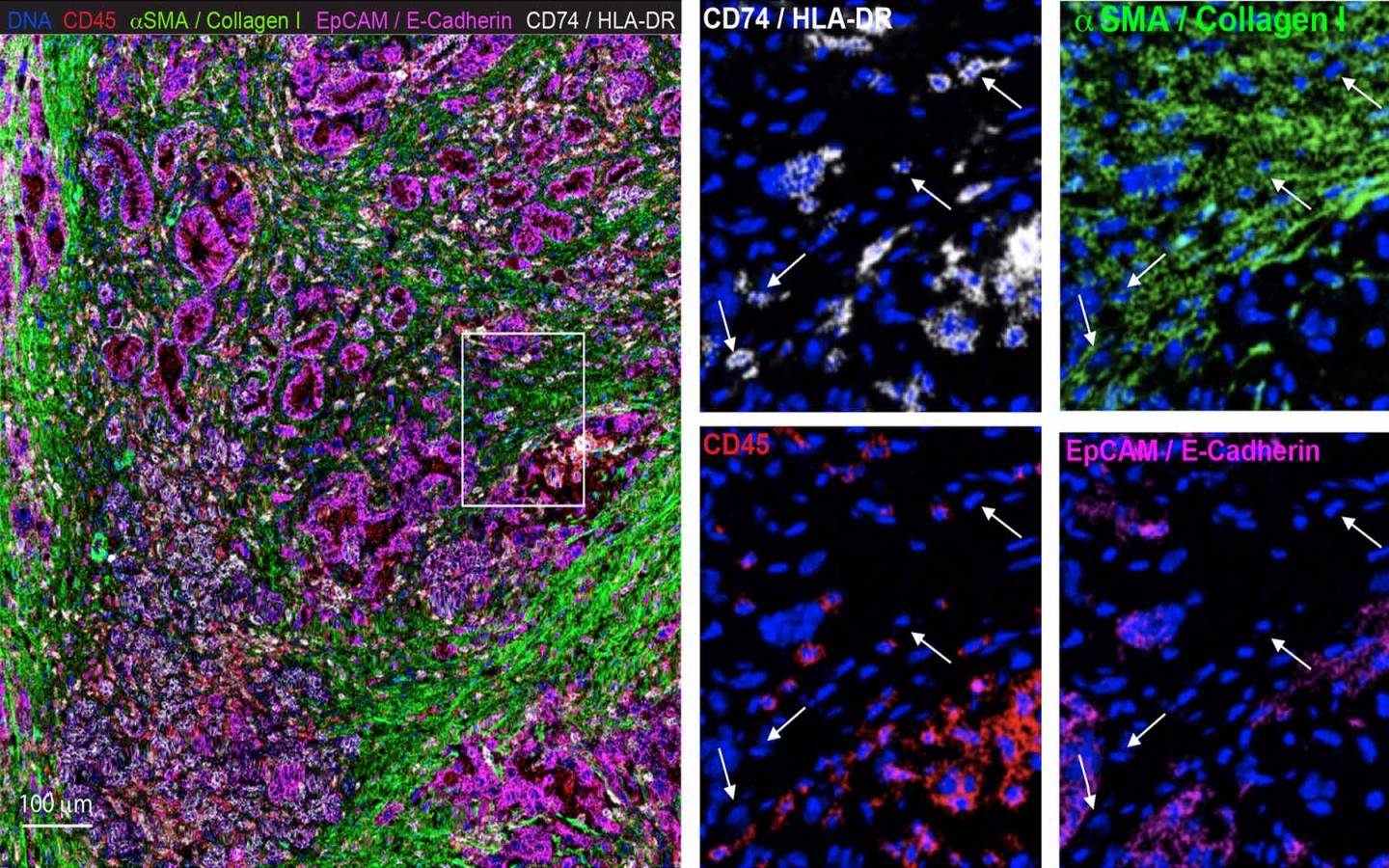 Cold Spring Harbor, NY — Pancreatic ductal adenocarcinoma (PDAC) is the fourth leading cause of cancer-related deaths in the world. Mostly chemoresistant, PDAC so far has no effective treatment. Understanding the connective tissue, called stroma, that surrounds, nurtures, and even protects PDAC tumors, is key to developing effective therapeutics.

“PDAC patients are diagnosed really late, so we don’t know they’re sick until the very end stages,” said Ela Elyada, a postdoctoral fellow in Dr. David Tuveson’s lab at Cold Spring Harbor Laboratory (CSHL). “We can’t diagnose patients early enough because we don’t have tools, and they don’t respond to drugs. One barrier to the drugs is the fibroblasts in the stroma.”

PDAC is characterized by an abundance of non-malignant stromal cells, and fibroblasts are one of the most common types of stromal cells. “We have a lot of fibroblast in pancreatic cancer, unlike other cancers which are mostly cancer cells,” Elyada said. These cancer-associated fibroblasts (CAFs) can help cancer cells proliferate, survive and evade detection by the immune system.

The insidious role CAFs seem to play in protecting cancer cells labels them as bad, but completely obliterating CAFs in mice also worsened their cancers. Elyada wanted to investigate the nature of CAFs: are they good or bad? To crack the case, she, Associate Professor Paul Robson at the Jackson Laboratory, and colleagues used single-cell RNA sequencing to classify the fibroblasts into three distinct sub-populations, identifying specific functions and characteristics unique to each. This includes two previously identified types of CAFs, myofibroblastic CAFs (myCAFs) and inflammatory CAFs (iCAFs), and also a new type of CAF called antigen-presenting CAFs (apCAFs). The apCAFs were present in both mice and human PDAC. Their findings are published in the journal Cancer Discovery.

While newly identified apCAFs had the properties of a fibroblast, Elyada and her team found that they were different from the other fibroblast sub-populations. They expressed MHC class II genes, which are usually only expressed by specialized immune cells. Cells with MHC class II molecules on the surface can present antigens, or foreign peptides from viruses and bacteria, to helper T-cells. Detecting the antigen, the T-cell activates and recruits cytotoxic T-cells and other immune elements to attack and eliminate the invader. But apCAFs present in pancreatic tumors lack other components that activate T-cells. Elyada and her team hypothesize that this may result in incompletely activated T-cells that are unable to properly eliminate the cancer cells.

“We showed that apCAFs have specific capabilities of interacting with T-cells in a way that other CAFs don’t,” said Elyada. The research team now wants to know how the apCAFs are interacting with T-cells and the immune system. “If we can show that the apCAFs are somehow inhibiting the activity of T-cells, we can come up with therapies that specifically target that type of CAFs,” Elyada proposed. “We can also combine it with other, complementary immune therapies to make them more effective.”

The use of mobile phone and the development of new pathologies

PCSK9 inhibitors: Specific studies are mandatory to prove efficacy and safety in CKD

The unpopular truth about biases toward people with disabilities