Black holes with varying light signatures but that were thought to be the same objects being viewed from different angles are actually in different stages of the life cycle, according to a study led by Dartmouth researchers. 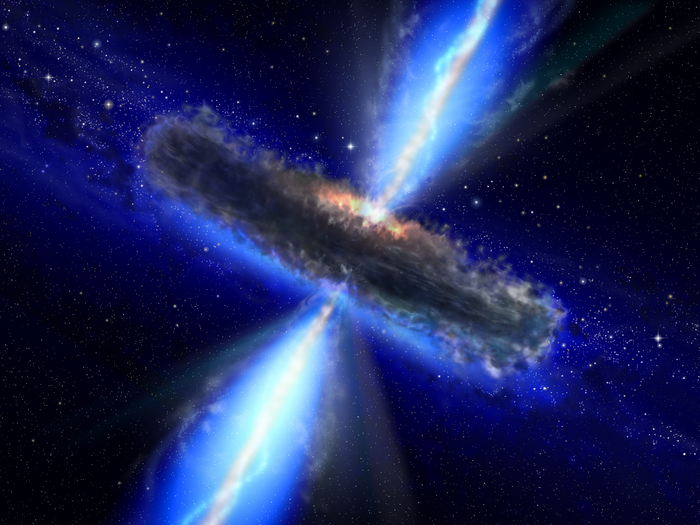 Black holes with varying light signatures but that were thought to be the same objects being viewed from different angles are actually in different stages of the life cycle, according to a study led by Dartmouth researchers.

The research on black holes known as “active galactic nuclei,” or AGNs, says that it definitively shows the need to revise the widely used “unified model of AGN” that characterizes supermassive black holes as all having the same properties.

The study, published in The Astrophysical Journal, provides answers to a nagging space mystery and should allow researchers to create more precise models about the evolution of the universe and how black holes develop.

“These objects have mystified researchers for over a half-century,” said Tonima Tasnim Ananna, a postdoctoral research associate at Dartmouth and lead author of the paper. “Over time, we’ve made many assumptions about the physics of these objects. Now we know that the properties of obscured black holes are significantly different from the properties of AGNs that are not as heavily hidden.”

Supermassive black holes are believed to reside at the center of nearly all large galaxies, including the Milky Way. The objects devour galactic gas, dust and stars, and they can become heavier than small galaxies.

For decades, researchers have been interested in the light signatures of active galactic nuclei, a type of supermassive black hole that is “accreting,” or in a rapid growth stage.

Beginning in the late 1980s, astronomers realized that light signatures coming from space ranging from radio wavelengths to X-rays could be attributed to AGNs. It was assumed that the objects usually had a doughnut-shaped ring—or “torus”—of gas and dust around them. The different brightness and colors associated with the objects were thought to be the result of the angle from which they were being observed and how much of the torus was obscuring the view.

From this, the unified theory of AGNs became the prevalent understanding. The theory guides that if a black hole is being viewed through its torus, it should appear faint. If it is being viewed from below or above the ring, it should appear bright. According to the current study, however, the past research relied too heavily on data from the less obscured objects and skewed research results.

The new study focuses on how quickly black holes are feeding on space matter, or their accretion rates. The research found that the accretion rate does not depend upon the mass of a black hole, it varies significantly depending on how obscured it is by the gas and dust ring.

“This provides support for the idea that the torus structures around black holes are not all the same,” said Ryan Hickox, professor of physics and astronomy and a co-author of the study. “There is a relationship between the structure and how it is growing.”

The result shows that the amount of dust and gas surrounding an AGN is directly related to how much it is feeding, confirming that there are differences beyond orientation between different populations of AGNs. When a black hole is accreting at a high rate, the energy blows away dust and gas. As a result, it is more likely to be unobscured and appear brighter. Conversely, a less active AGN is surrounded by a denser torus and appears fainter.

“In the past, it was uncertain how the obscured AGN population varied from their more easily observable, unobscured counterparts,” said Ananna. “This new research definitively shows a fundamental difference between the two populations that goes beyond viewing angle.”

The study stems from a decade-long analysis of nearby AGNs detected by Swift-BAT, a high-energy NASA X-ray telescope. The telescope allows researchers to scan the local universe to detect obscured and unobscured AGNs.

The research is the result of an international scientific collaboration—the BAT AGN Spectroscopic Survey (BASS)—that has been working over a decade to collect and analyze optical/infrared spectroscopy for AGN observed by Swift BAT.

“We have never had such a large sample of X-ray detected obscured local AGN before,” said Ananna. “This is a big win for high-energy X-ray telescopes.”

The paper builds on previous research from the research team analyzing AGNs. For the study, Ananna developed a computational technique to assess the effect of obscuring matter on observed properties of black holes, and analyzed data collected by the wider research team using this technique.

According to the paper, by knowing a black hole’s mass and how fast it is feeding, researchers can determine when most supermassive black holes underwent most of their growth, thus providing valuable information about the evolution of black holes and the universe.

“One of the biggest questions in our field is where do supermassive black holes come from,” said Hickox. “This research provides a critical piece that can help us answer that question and I expect it to become a touchstone reference for this research discipline.”

Future research could include focusing on wavelengths that allow the team to search beyond the local universe. In the nearer term, the team would like to understand what triggers AGNs to go into high accretion mode, and how long it takes rapidly accreting AGNs to transition from heavily obscured to unobscured.