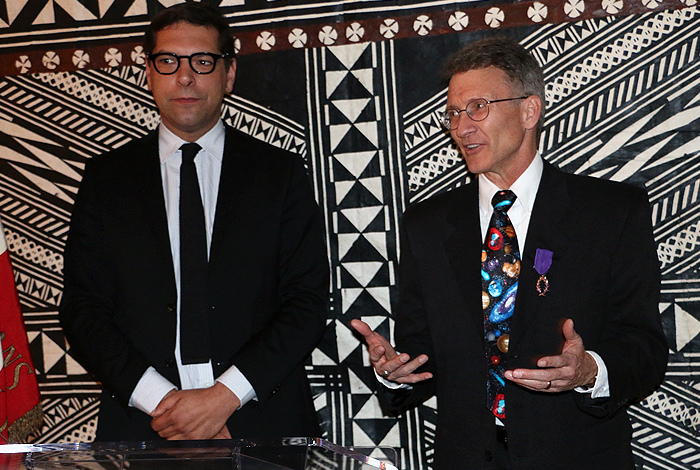 ChemCam leader honored for touching the lives of “ambitious earthlings”

LOS ALAMOS, N.M., April 11, 2016—Space scientist Roger Wiens was awarded the honorary title of chevalier (knight) in France’s Academic Order of Palms for his work in forging strong ties between the French and American scientific communities. Wiens is the principal investigator of the ChemCam, a laser spectroscopy instrument on NASA’s Mars Curiosity rover that was developed at Los Alamos National Laboratory in collaboration with numerous French scientists.

“The contributions you have made to spectroscopy and space exploration throughout your lifelong career in research are tremendous,” said Christophe Lemoine, Consul General of France, during his remarks at a ceremony last week in Los Angeles, Calif. “Your work has touched the lives of many young, ambitious earthlings who aspire to follow in your footsteps.”

Wiens responded, “This was very much a team effort, and I have been very privileged to work among such talented people, both at Los Alamos and in France. This is really recognition for our great teamwork.”

Wiens is now leading a joint effort between Los Alamos and a team at the French space agency, Centre National d’Etudes Spatiales, to develop SuperCam, the next-generation version of the ChemCam device; SuperCam was selected in August 2014 to be part of the new Mars 2020 rover payload. Los Alamos has a long, storied history in space sciences as part of its national security mission and commitment to innovate science and technology.

The palmes académiques is the oldest non-military French decoration, established by Napoleon I in 1808. As an American, Wiens is one of only few hundred non-French citizens to be recognized with this distinction. For more information, visit http://www.frenchacademicpalms.org/information.html.