Earth Observation (EO) experts based at the University of Leicester have laid bare the UK’s record-breaking heatwave with data captured from space. 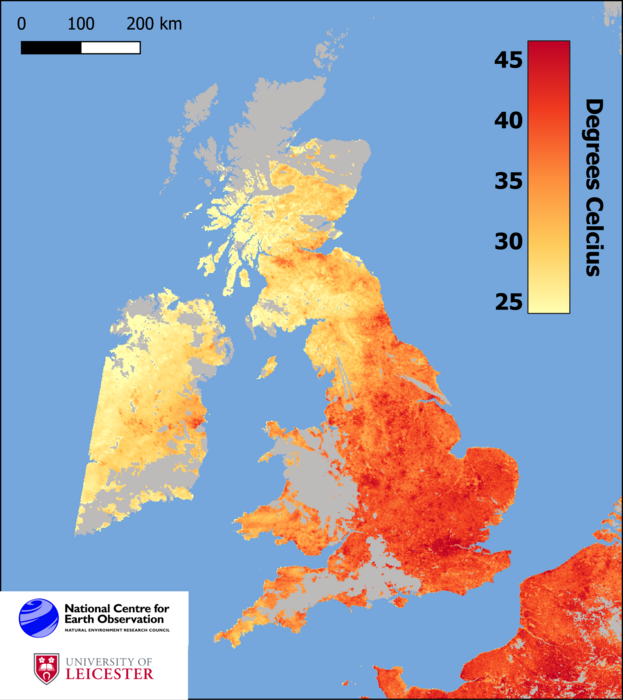 Earth Observation (EO) experts based at the University of Leicester have laid bare the UK’s record-breaking heatwave with data captured from space.

Leicester scientists affiliated to the National Centre for Earth Observation (NCEO), headquartered at Space Park Leicester, have mapped measures of land surface temperature – topping out at 52°C – as measured by the pair of Sentinel-3 satellites in orbit more than 800km (500 miles) above Earth.

Their map shows the temperature of the Earth’s surface at approximately 10.20am on Monday morning as seen by the satellites’ Sea and Land Surface Temperature Radiometer (SLSTR). The satellites are operated by the European Space Agency (ESA).

Land surface temperature is a separate measure to ambient air temperature, but the two are fundamentally linked. The warmth rising off Earth’s landscapes influences (and is influenced by) our world’s weather and climate patterns.

“Space based observations of the temperature of the surface of the land offer unparalleled knowledge of the spatial structure of these heatwave events.”

The map shows the hottest land surface temperatures focused around London and other major town and cities in both south east England and the Midlands.

These urban ‘heat islands’ occur because the increased concentration of concrete, buildings and other dense materials absorb and retain heat at a higher rate than natural land cover.

The NCEO processes and analyses vast quantities of data generated by satellites, as well as by aircraft and ground-based assets to monitor and understand global and regional changes.

Headquartered at Space Park Leicester, the NCEO is formed of a distributed team of more than 100 scientists from UK universities, including many at the University of Leicester.