The black and white tegu lizard, which depends on external environmental factors to regulate body temperature, can survive swings between 15 and 35 degrees Celsius in a single day while keeping blood pressure steady 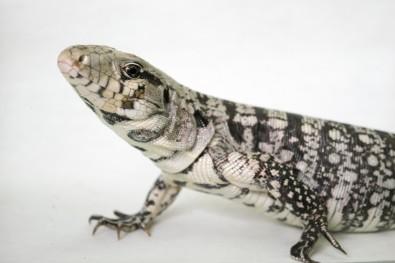 The mechanism that keeps arterial blood pressure stable in black and white tegu lizards (Salvator merianae) even as their body temperature varies substantially is more efficient at lower than higher external temperatures, contrary to what has always been believed, and vascular regulation plays a key role in pressure adjustments, according to an article published in PLOS ONE by researchers at the Federal University of São Carlos (UFSCar) in the state of São Paulo, Brazil. The research was supported by FAPESP.

The findings pave the way for more investigation of the physiology of ectothermic animals, which rely on external environmental factors to regulate body temperature, and of novel applications for the method used in the study.

“At some time, practically everyone feels dizzy on getting out of bed too quickly. The baroreflex is the mechanism that compensates for the sudden change in arterial pressure as blood in the lower part of the body, which flows at the same height as the heart while the person is lying down, suddenly has to flow against gravity when they get up. This kind of reflex is a feature of all vertebrates and is affected by temperature. It used to be thought that the increase in metabolism at higher temperatures enhanced the efficiency of the mechanism, but that’s not what we found in our study,” said Renato Filogonio, first author of the article and a researcher in the Department of Physiology at UFSCar’s School of Biological and Health Sciences (CCBS) with a postdoctoral scholarship from FAPESP.

The research was part of a project funded by FAPESP and with Cléo Alcantara Costa Leite, a professor at CCBS-UFSCar, as principal investigator.

“The baroreflex is an important mechanism that keeps pressure stable at the start of the circulatory circuit,” Leite said. “Blood pressure must be high at the start and low at the end of the system because the pressure difference is what drives the blood flow. Without blood flow, there’s no perfusion, which is the passage of blood through the tissues. The baroreflex is an adjustment mechanism, a reflex produced by the autonomic nervous system in all vertebrates to maintain homeostasis in the cardiovascular system.”

Previous research showed that the efficiency of the baroreflex in reptiles and amphibians increases as the temperature rises, but heart rate alterations were measured after the use of drugs to raise or lower blood pressure in the studies in question. Here the animals were evaluated without the stress of pharmacological manipulation.

Furthermore, previous studies focused on compensatory baroreflex-related heart rate modulation, known as the cardiac branch, as this can be measured using the pharmacological method. The CCBS-UFSCar researchers analyzed the vascular branch, i.e. vascular resistance and compliance when aortic valves close, to find out if it helped the cardiac branch sustain cardiovascular homeostasis at low temperatures.

Diastolic and systolic arterial blood pressure, heart rate, and pulse interval were measured via catheters implanted in 11 tegus and connected to pressure transducers. Measurements were taken at three temperatures: 15 °C, corresponding to mean nocturnal temperature; 35 °C, preferred for daytime activities; and 25 °C, corresponding to the midpoint between these two extremes.

“The results showed that in practice the baroreflex acts more efficiently when the temperature is falling, which is the opposite of what was previously believed. When the temperature is lower, heart rate is lower and compensations can’t rely only on this regulatory branch. That’s what happens in this case. The mechanism is made more efficient by vascular adjustments,” Leite said.

“The study is a good starting point for further research on the vascular branch of the baroreflex, focusing on comparative physiology, evolution or medical aspects, given that the method can easily be implemented in other animals,” Filogonio said.