Five to ten million years ago an asteroid smashed into Mars. It created a massive crater and propelled a chunk of ancient Martian crust into space as a new meteorite, which eventually crashed into Africa. 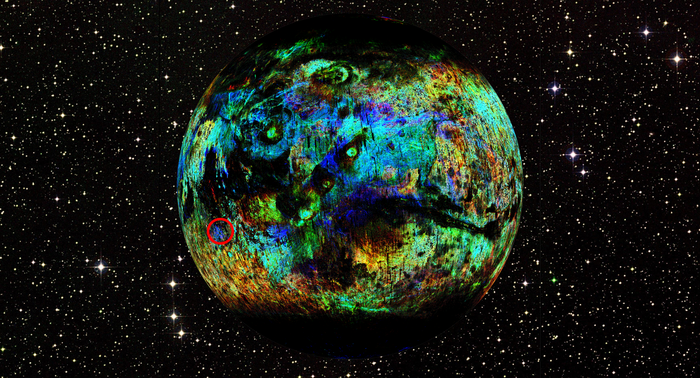 Five to ten million years ago an asteroid smashed into Mars. It created a massive crater and propelled a chunk of ancient Martian crust into space as a new meteorite, which eventually crashed into Africa.

We now know where on Mars that meteorite came from, thanks to a supercomputer-powered technology that allows us to explore the geology of planets without leaving home.

Remains of meteorite NWA 7034, known as Black Beauty, were discovered in Western Sahara in 2011. The story of its creation is told for the first time in Nature Communications by a global team led by researchers from Curtin University, supported by the Pawsey Supercomputer in Perth, Australia, and with colleagues in France, Côte d’Ivoire, and the United States.

Black Beauty is formed of Martian rocks formed nearly 4.5 billion years ago when the crusts of both Earth and Mars were still young. Now we know the source of Black Beauty, researchers can use it to compare the formation of Mars and Earth.

Researchers named the crater Karratha after a city in Western Australia that is home to one of the Earth’s oldest rocks. The team want NASA to prioritise the area around Karratha Crater as a future landing site on Mars.

The source of the rocks on Mars was found by analysing thousands of high-resolution planetary images from a range of Mars missions.

The team identified about 90 million impact craters by running a machine learning algorithm on one of the fastest supercomputers in the Southern Hemisphere, at the Pawsey Supercomputing Research Centre. The algorithm was partially developed by Kosta Servis, a senior data scientist at the Centre.

The research was led by Dr Anthony Lagain, from Curtin University’s Space Science and Technology Centre, with co-authors from Paris-Saclay University, Paris Observatory, Muséum National d’Histoire Naturelle, the French National Centre for Scientific Research, the Félix Houphouët-Boigny University, Côte d’Ivoire, and Northern Arizona University and Rutgers University in the US.

‘Early crustal processes revealed by the ejection site of the oldest martian meteorite’,

The formation and differentiation of the crust of Mars in the first tens of millions of years after its accretion can only be deciphered from incredibly limited records.

The martian breccia NWA 7034 and its paired stones is one of them. This meteorite contains the oldest martian igneous material ever dated: ~4.5 Ga old. However, its source and geological context have so far remained unknown.

Here, we show that the meteorite was ejected 5-10 Ma ago from the north-east of the Terra Cimmeria – Sirenum province, in the southern hemisphere of Mars. More specifically, the breccia belongs to the ejecta deposits of the Khujirt crater formed 1.5 Ga ago, and it was ejected as a result of the formation of the Karratha crater 5-10 Ma ago.

Our findings demonstrate that the Terra Cimmeria – Sirenum province is a relic of the differentiated primordial martian crust, formed shortly after the accretion of the planet, and that it constitutes a unique record of early crustal processes.

This province is an ideal landing site for future missions aiming to unravel the first tens of millions of years of the history of Mars and, by extension, of all terrestrial planets, including the Earth.

The Pawsey Supercomputing Research Centre is a world-class high-performance computing facility accelerating scientific discoveries for Australia’s researchers. Named for Australian scientist Joseph Pawsey, known as one of the pioneers of Australian radio astronomy for his work in the field of interferometry, the Centre enables science and accelerates discovery, by contributing to the delivery of globally significant research. Pawsey is currently serving over 40 organisations and achieving unprecedented results, in domains such as radio astronomy, energy and resources, engineering, bioinformatics and health sciences.